It's been a very slow start to the 2014 melt season, but that doesn't mean a recovery of the sea ice is underway.

The CT Area anomaly cliff seen in recent years, including 2013, has failed to happen so far this June. It is not too late for this to happen if weather conditions change, but that would require a significant change to the weather. 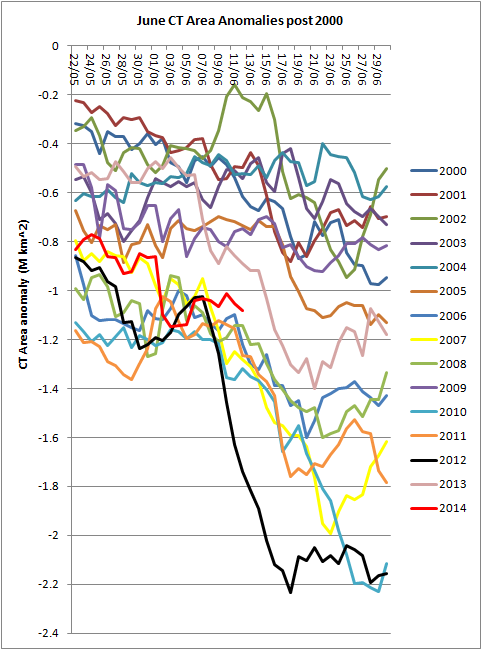 NSIDC Extent anomalies have started to drop in June for the years after the 2010 volume loss event, again so far this has not happened and 2014 looks more like 2013. 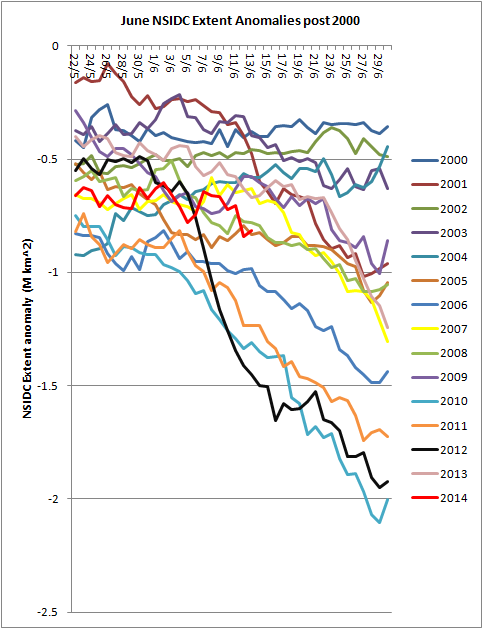 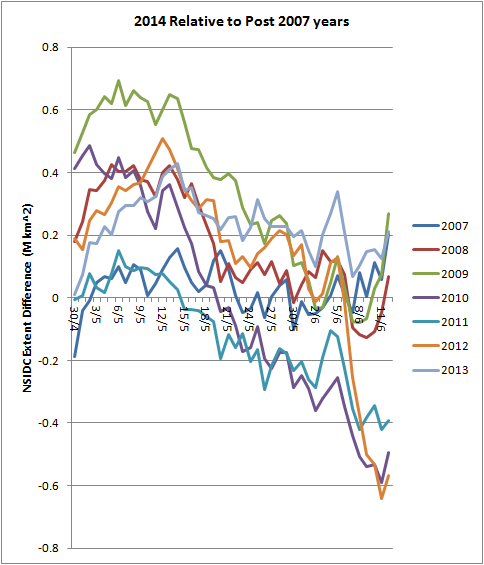 Temperatures in early June look to be a contender for the coldest early June in recent years. For example, here are 2014, 2013 and 2012.

2014 is seen to have a larger area of below average temperatures than even 2013, while the warmth of early 2012 is marked. Unfortunately NCEP/NCAR doesn't do timeseries for periods of days, only full months.

The atmospheric set up that has caused 2014 to have a slow start, as did 2013, shows that early June 2014 is not like early June 2013. I expect some may be arguing, based on sea ice data alone, that two years mean the start of a recovery, there is no indication of a common process at work so this reasoning is flawed.

These were plotted on 11 June showing data up to 9 June, I've not had the chance to post until now.

By early June in 2012 the atmosphere was already showing the signature of the 2007 to 2012 summer average sea level pressure, what I call the Summer Pattern, shown below.

However other post 2007 years have shown little early June resemblance to the Summer Pattern, yet by September the June, July August average has revealed that the pattern was present in the summer average. There is still time for this to form, and there are indications of a shift in the weather to a stronger high pressure over the pack, with low pressure along the Siberian coast being a possibility by this time next week (Wetterzantrale). However with such long term forecasts there is also the possibility it won't, so I'll just see what happens.

Prospects for a new record this year are looking very remote now, however it is still possible for 2014 to enter the top five lowest years for NSIDC Extent, everything depends on the weather. It will be interesting to see how this will affect the PIOMAS spring melt, based on 2013 I expect that the effect will be small.
Posted by Chris Reynolds at 01:04

Chris, the graph of comparative NSIDC ice extent appears to be missing the line for 2014. Thanks for the info.

OT but a quick heads-up:

From the description, it doesn't necessitate a contradiction in that the winters could be less extremely cold, but have more cold events due to blocking. However, we'd need to see the paper itself to see whether that's addressed.

Also, if we're talking about a change that's occurred within the last decade (and I know it's too early to tell that from weather), then a several decade long study may hide the fact.

There's no 2014 line because all those lines are the difference between 2014 and the stated year.

I've blogged quite a bit on the issue of cold winter events and the Arctic (Cohen's work).
http://dosbat.blogspot.co.uk/2011/12/cold-winters-arctic-connection.html

But Screen is correct, without the Warm Arctic Cold Continents pattern we should expect milder winters.

I've been carefully studying the daily Lance "Rapid Response" images, and what's interesting is that there are large areas of very thin ice. And a lot of very fractured ice. So while the ice area and extent appear to be falling more slowly than recent years, once we get to July, and things really warm up, I expect both numbers to plunge. And with the fractured ice, if a persistent wind blows south through the Fram Straight, vast areas of ice will sail through with no structure to hold it back.

In my experience the final extent/area/volume have a lot do do with what happens in August and September, but I think the water is so warm these days that the ice is melting from below. Looking at the north coast of Greenland, you can see that many of the fjords are trying to melt. The same is true throughout much of the Canadian Archipelago.

But I think this year's big story could be Greenland itself. It's so warm and so melty that a warm July could lead to record mass loss. And if all those outlets open up, look out.

This past Wednesday the previous pattern of atmospheric set up shifted and a high pressure set up over the Central Arctic Ocean. In GFS a consistent pattern of high over the Arctic Ocean (or at least part of it) is countered by low over Siberia. This is what forms the Arctic dipole anomaly, which has a clear role in 2007 to 2012 melts.

How much the delay will result in increased area, extent, or volume in September is far too early to say. But Wipneus who makes his own calculations of area and extent seems to think the pause is over, see here. Based on what I'm seeing in the atmosphere I agree.

A new blog post on this change is already being prepared....