I'm doing this month's PIOMAS data in two posts mainly because work (day job) pressures mean I'm far too tired to do a full post and will be for the rest of the week. I'll catch up over the weekend, that means Sunday, Saturday looks like a day of dozing and watching films. However the notable increase in traffic from Neven's blog suggested to me that I had to do something tonight, so here it is.

For those who want the data, I've updated the breakdowns of PIOMAS data I provide here. Note that due to a conversation between Wipneus and Dr Schweiger it turns out the concentration is not used in the calculation of thickness. So I've re-run all thickness from 1978 and updated the relevant CSV file to May 2014, previously I wasn't able to calculate thickness during the year because I was using concentration which only updates at the end of the year. This means there are now CSV files with PIOMAS volume by region, thickness by region, and volume for thickness bands by region.

Firstly the obligatory map plot, Wipneus makes better looking map plots which can be seen here. Note however that map plots for all months from January 1978 to May 2013 are available in folders and (by decade) zip files here. 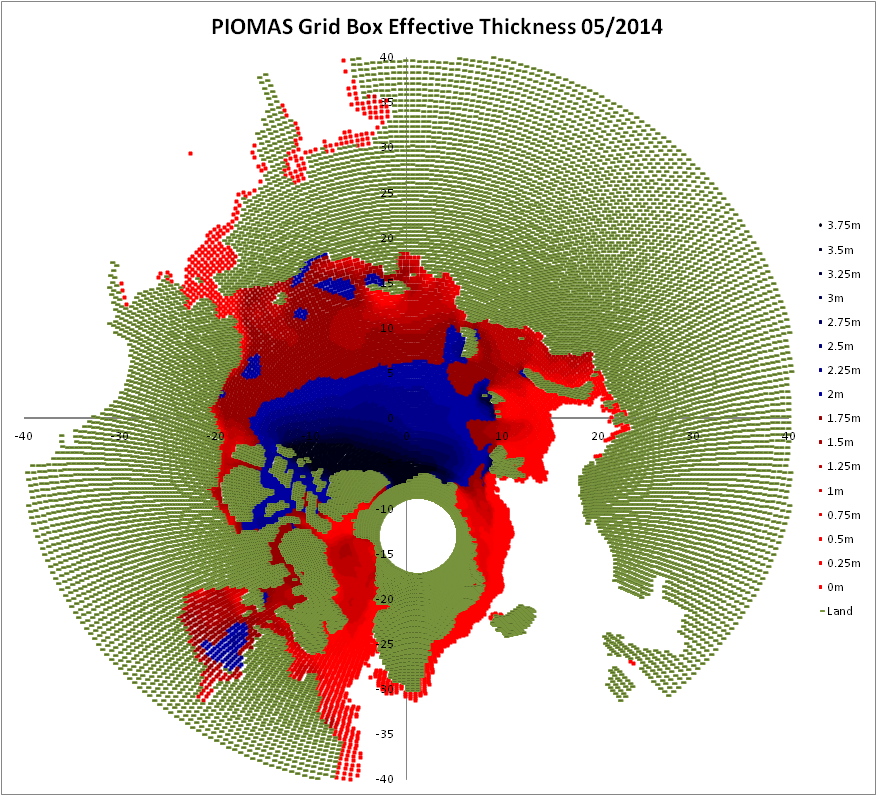 A striking feature of the May data is that there has been a shift of the thicker ice away from the Pacific sector (left) into the Atlantic sector (right). This can be seen in the following animated gif from January to May 2014.

The following two images are from NCEP/NCAR, note that they are rotated from the above image, finding Greenland is probably the easiest way to orient yourself. The first shows average sea level pressure from Mar to May, the dominating pattern being a persistent massive low tendency centred over the Barents Sea. 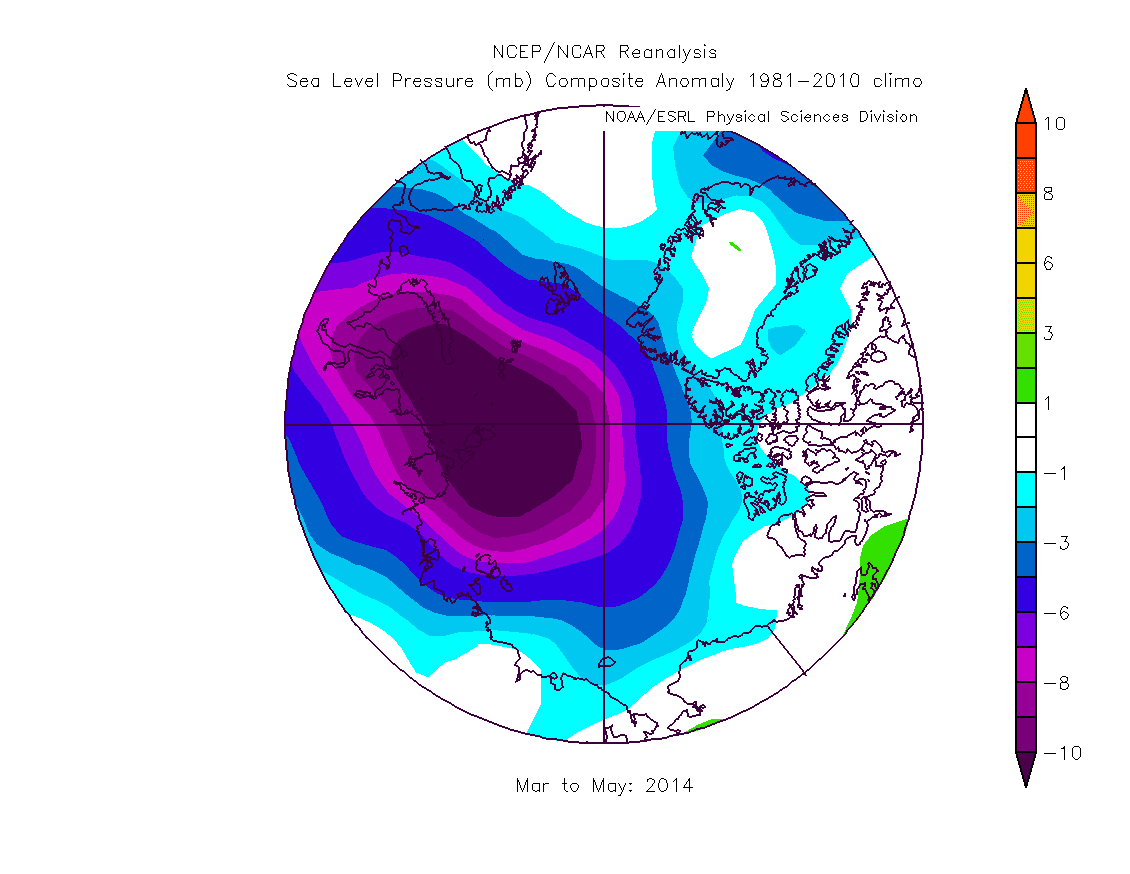 This low has caused strong wind movements as seen in the following plot. The colours show the average wind speed in metres/second, the arrows give a sense of wind direction. 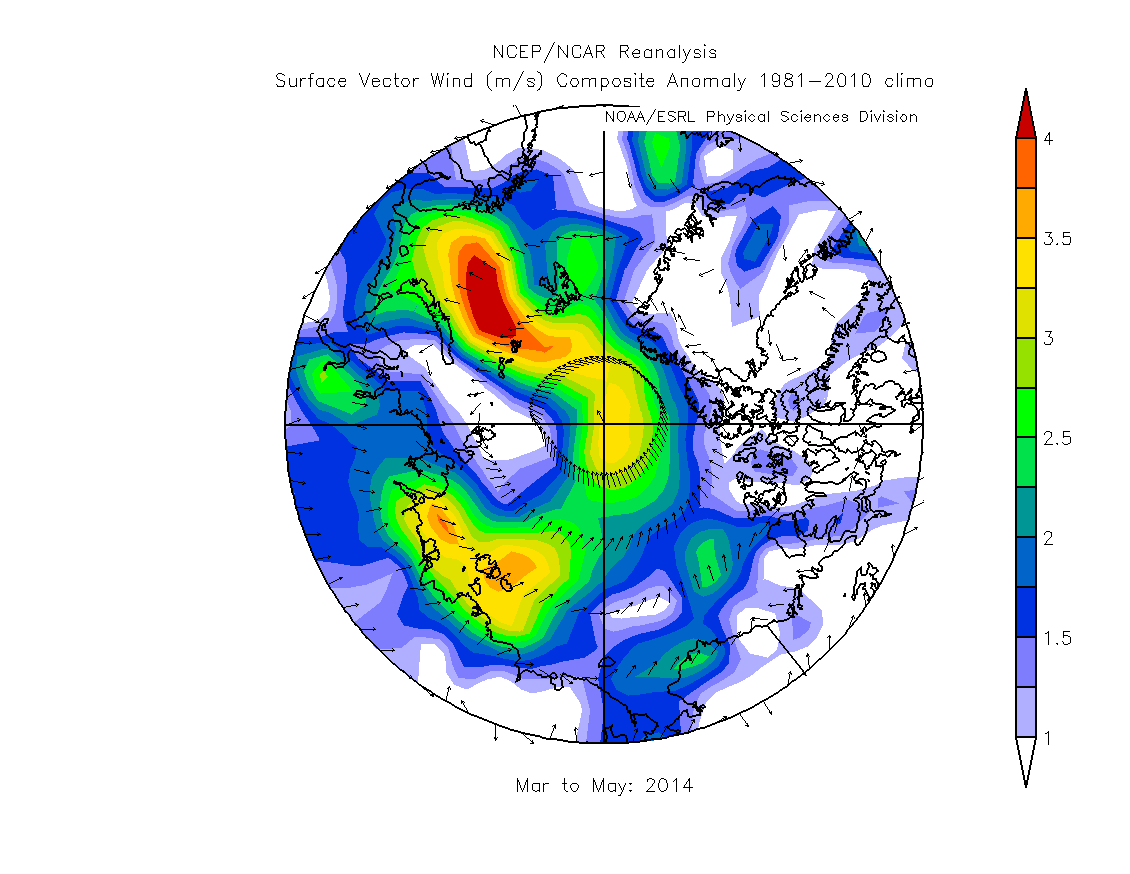 .
There has been a strong wind movement parallel to the north of Greenland / Canadian Arctic Archipelago coasts driving ice out into the Atlantic sector (upper left quarter of the above image). In tandem with this, further upstream of the anti-clockwise low around the Barents low pressure tendency, is a strong movement away from the coast in the Laptev Sea (lower left quarter of the above image). Those following the ice will have seen the impact of this in the opening of a large amount of open water in the area of the Laptev Sea. This can be seen in the following image from Bremen. Upper edge of the pack off the coast of Siberia. 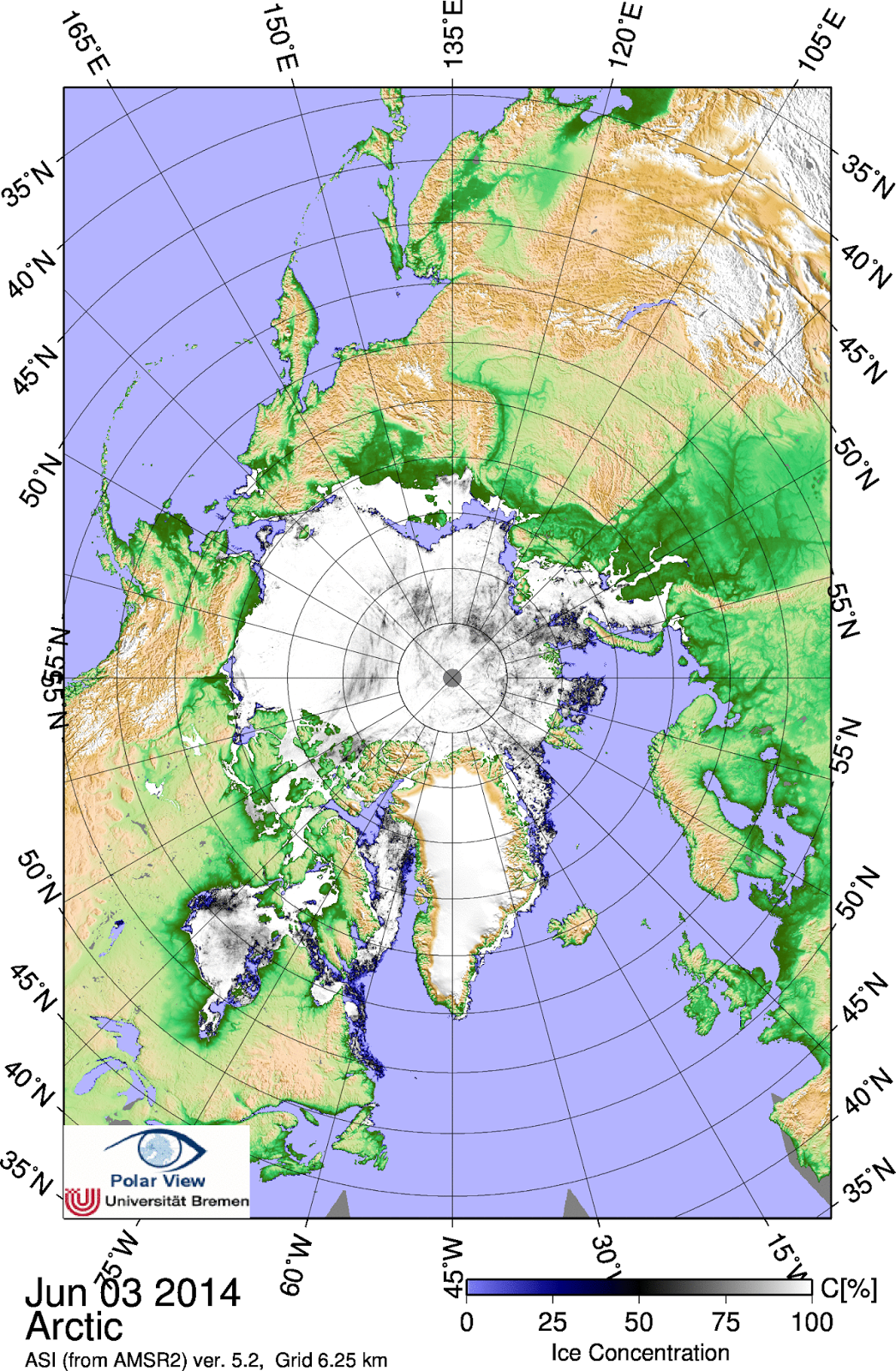 The significance of that open water is that it is far darker than ice and has opened before the solstice, so is well placed to act as an absorber of sunlight. In tandem with the positioning of ice mass near the Fram Strait outflow and influence of warm Atlantic waters, it could prove to be an interesting development for the early melt season, with possible impacts throughout the season.
Posted by Chris Reynolds at 12:24

Is it just me or does the main consolidated 2m+ thickness area "disturbingly resemble" the shape, size and position of the ice pack in September 2007?

There is a similarity there, although in early 2007 there was a lot of ice over 2m thick in the Pacific/Siberian region.