Dr Schweiger has been good enough to let me know that thickness fields from PIOMAS gridded data are now available for 2013 up to March. Previously it seems to have been released in January for the previous year. Let's hope they get the chance to update periodically in what I suspect will be an exciting year on the ice.

Anyway, enough blather, this is what you want. 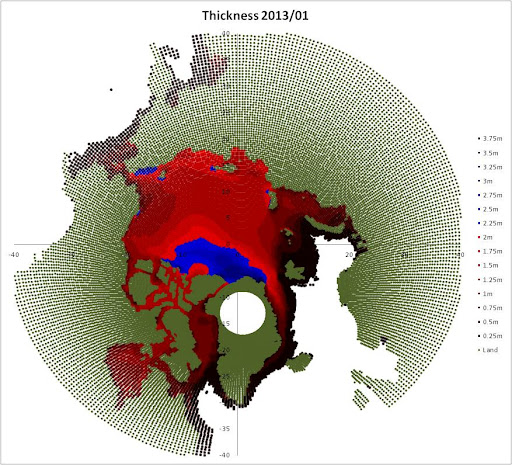 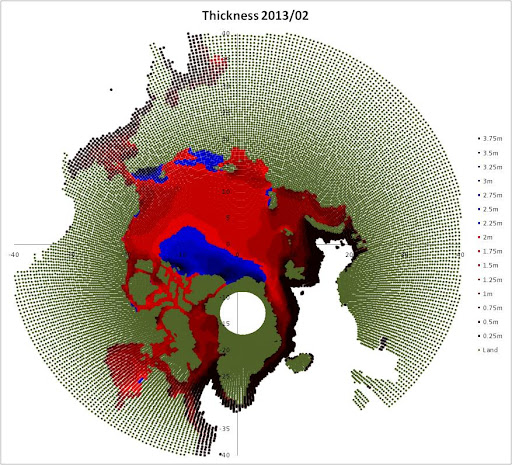 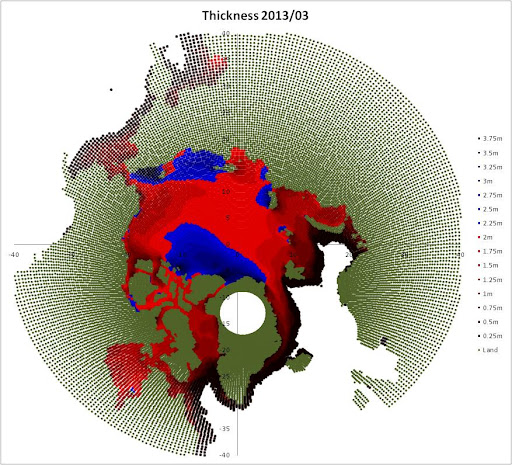 For March the thick region off the Russian coast of the Bering Strait is 3.75m and above, the bulk off the Canadian Arctic Archipelago is up to 3.25m, with small pockets on the coast that are thicker. The large region of red monotone is 2m to 2.25m thick. April thickening will not amount to much over most of the pack, but movement may cause the model to thicken ice through ridging in some areas. 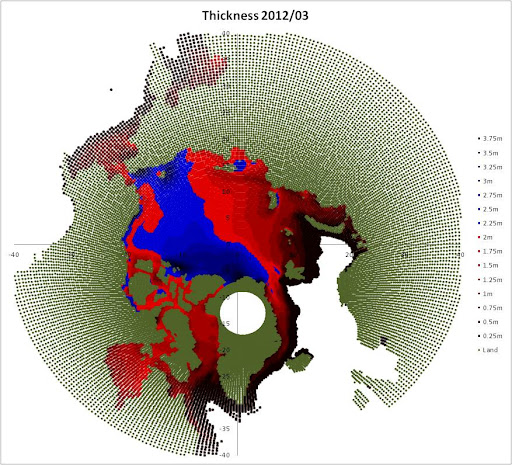 That thick blue band over to Siberia was PIOMAS simulating the intrusion of multi-year ice (MYI) as seen in Drift Age Model (DAM) plot for week 10 of 2012, here, there is no such intrusion this year. Last year that MYI caused a delay to the melt which resulted in a large region of scattered low concentration ice. That won't happen this year. I expect an aggressive melt from the first week of June onwards, when the melt really starts within the Arctic Ocean.
Posted by Chris Reynolds at 14:39

For March the thick region off the Russian coast of the Bering Strait is 3.75m and above

2013 thicknesses up to 3.9m. Last year the thicknesses went up to 4.58m. That is a noticeable thinning of the thickest cells (see also post on Neven's blog).

Thick ice off the parts of the Siberian coast in winter is typical. I suspect it's due to a combination of compression riding and cold outbreaks from Siberia, which typically gets colder than the Arctic Ocean.

The blue region in March 2013's image is the same region that didn't move during the net clockwise movement of the pack in Feb/March. This FYI will have been under tremendous compression during the event.

See also my new post with regards thinning of March ice, this also applies to April as new thickening won't be much.