The mid month round up of odd bits that interest me and don't fit elsewhere is here. You won't find the 'A' word anywhere in this one.


Stuart Staniford is a blogger to pay attention to. I've often pondered taking The Oil Drum off my blog roll and leaving just Stuart, although if I did that I think wider issues would be sorely under-represented. And Stuart Staniford's blog, called "Early Warning", is a must read to keep up to date on those wider issues.

I tend to leave Peak Oil alone and check up on it once a year, I'm too busy to follow it regularly, I don't even follow Early Warning or the other blogs on my blog roll as much as I should. Basically I think we're at Peak Oil, but it's a bit like me saying on 10th August that it's summer. It doesn't say anything about summer's warmest period, or how it will cool down into autumn, it's just a broad statement. Likewise although I think we're at Peak Oil I'd like to leave it another decade or so before deciding what year the peak was in, and how oil supplies declined after the peak.

James Hamilton Makes the case at The Oil Drum that while the 'all liquids' supply keeps rising, the crude oil supply has risen to a far lesser degree, link. So it seems there is potential to increase supply, however when I look at the price and supply graphs on that page, it strikes me again that the increase in price is far more than that in production. So as a price incentive to develop more supply, the result isn't as much more supply as simple supply/demand reasoning might suggest. Which is a major reason I think we're so near peak as to be able to say that we're at it, given that it will likely take at least a decade of hindsight to say anything with certainty.

Anyway Stuart has been good enough to do some of the leg work, link, having included recent years in the Hubbert Linearisation model of oil supply. That's a good thing for me because before I'd be able to jump into such an analysis I'd need to revise all I've forgotten about Peak Oil, which is almost as much as I once knew. The full post is well worth reading, I'm not in the business of repeating other people's posts, so I've missed very useful details out, particularly the closing quote. 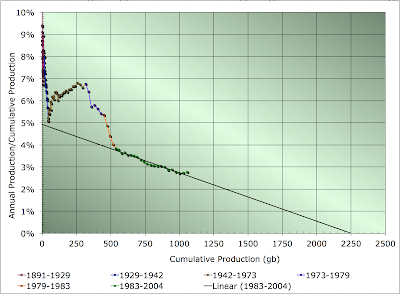 Note that the linear fit intersects the zero vertical axis line at 2250G barrels (Gb) cumulative production, that means the model predicts around 2250Gb assuming the production profile complies with the Hubbert Curve. Now Stuart has updated to 2011. 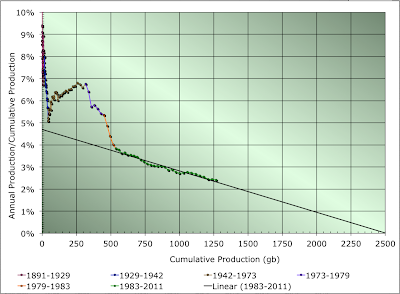 I still think we're so close to peak it doesn't make much sense to argue about the exact year, but we could see additional supplies giving a plateau, or gentle downward slope, unlike the catastrophic post peak drops some commentators claim.

Also on Early Warning are two more posts worth noting (the latest one published as I'm writing this post). They're about changes to food production:
Basically talk of Climate Change impacting food at a global level now is not founded. For the future? combine Climate Change, Population Growth, overfishing and ocean acidification, and the declining supply of fossil fuels, and things might get interesting. Interesting in the sense of the curse of allegedly Chinese origin: "May you live in interesting times".

Actually it's worth repeating the three curses, for those who haven't come across them:
These are almost as good as the line attributed to Diocletian when he was asked to return to power in Rome to sort out the mess that had ensued since he retired (my favourite historical quote):


"If you could show the cabbage that I planted with my own hands to your emperor, he definitely wouldn't dare suggest that I replace the peace and happiness of this place with the storms of a never-satisfied greed."

In the context of Stuart Staniford's blog 'Early Warning' blog being a 'Rational Analysis of Global Civilisation Risk', and the context of the main problem we face, that of exponential growth and it's core place in our civilisation. I can't help but find the contrast of Diocletian's statement rather amusing, to be in a position to say 'Fuck Off' so eloquently would be quite satisfying. The death of Margaret Thatcher has had me thinking: I was a free-market small-government Conservative, I thought people who strived for progress and economic growth were doing good. Now I wonder if I see such people as a serious problem.

On a lighter note: Peter Sellers explains why North Korea are acting up again, with the allowance that South Korea can be considered the US's proxy:

I was a free-market small-government Conservative, I thought people who strived for progress and economic growth were doing good. Now I wonder if I see such people as a serious problem.

Conservative politics in the USA has been infected with an authoritarian, religious zealotry over the past twenty years that makes historical conservatives (as recent as Reagan in the 1980s) seem like tree-hugging liberals.

I've always been a free-thinking radical/liberal. 30 years ago I could at least understand the viewpoint of conservatives - today I think they're clinically insane. I don't say that with any intent of hyperbole - there is seriously something wrong with them.

Bob Altemeyer wrote in The Authoritarians, "The last reason why you might be interested in the (this book) is that you might want more than just facts about authoritarians, but understanding and insight into why they act the way they do. Which is often mind-boggling. How can they revere those who gave their lives defending freedom and then support moves to take that freedom away? How can they go on believing things that have been disproved over and over again, and disbelieve things that are well established? How can they think they are the best people in the world, when so much of what they do ought to show them they are not? Why do their leaders so often turn out to be crooks and hypocrites? Why are both the followers and the leaders so aggressive that hostility is practically their trademark?"

It's not just climate change deniers, but the entire conservative political structure has been co-opted by people who no longer care about facts, reality, or anything other than imposing their beliefs on everyone else.

In many ways culturally here in the UK we're very much like the US. But politically there are major differences.

The Blair government tried to bring together the worst of the market-liberals by deregulating, and allowing debt levels to soar. While they reverted to the worst tendencies of the left wing - controlling and anti libertarian. Attacking thousands of years of principles in law and moving us closer to a police state. Yet it seems to me that this is more like a description of the Bush government. I liked neither Bush nor Blair and was furious about the lies told over Iraq.

But in the US you do have a weird bunch, in the mainstream of political life, who desperately avoid reality and invent a fantasy world to avoid thorny issues like AGW. Here in the UK that sort of behaviour isn't in the political mainstream. Since the Royal Institution have concluded that AGW is real the political classes seem to have largely stepped in behind that position.
http://royalsociety.org/policy/climate-change/
All our major parties accept AGW and the anthropogenic part. Even if there is disagreement over what to do about it.

The major problem we have in both our democracies is that of vested interests interfering in the democratic process by lobbying and political funding. This needs to be seen for what it is; anti-democratic, and a grave threat to the very basis of 'one person, one vote'.