In what I consider a very important paper, Wang et al 2009 ask: "Is the Dipole Anomaly a major driver to record lows in Arctic summer sea ice extent?"

They start by noting that since 2002 the Arctic Oscillation (AO) has become neutral to negative, yet there has been rapid sea-ice retreat over that period. Since the 1970s there has been a correlation between the AO and sea ice loss through the Fram Strait, with the positive AO of the 1990s leading to a significant increase in sea ice loss. So it seems that the AO has not played a role in the ice loss since 2002. As previously discussed, Zhang found that in the period 2002 to 2007 the Arctic Dipole (AD) has become the dominant mode of variability in the Arctic, taking over from the AO.

As an aside, Wang et al also state that the AD is distinct from the Pacific North American (PNA) pattern, having a correlation of a mere 12%. Overland et al also consider a PNA which they denote PNA* because of it's difference from the classic PNA pattern. They find that the recent warming has a different pattern to the changes of the 20th century. Earlier changes, including the 1940s Arctic warming episode, had zonal patterns related to the AO and PNA*, the recent warming of the 21st Century has a spatially uniform pattern across the Arctic and is associated with a meridional atmospheric pattern untypical of the 20th Century and unlike the warming in the 1940s. Although unstated in Overland et al that 'meridional pattern' is indeed the Arctic Dipole.

Wang et al use Watanabe's (ref) definition of 4 states in the Arctic atmosphere.


They examine the role of these states in recent episodes of significant ice loss resulting in new record minima, note that the definition of these episodes is that of setting a new record in extent or area, or indeed both. Using the years 1995, 1999, 2002, 2005, 2007 they find that all of those states have positive AD indices, being of states, 1, 3, 1, 3, 3 respectively. Furthermore when the preceding Winter/Spring AD index is used with the Summer DA index as a scatter plot it clearly identifies the role of a Summer positive DA index in episodes of ice loss that set new records. 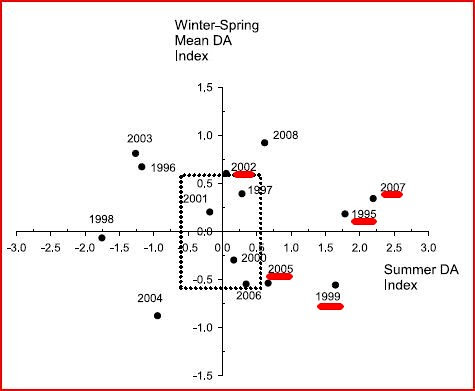 Figure 3 of Wang et al 2008, The dotted lines indicate the 0.6 threshold, indices above 0.6 are considered signficant. Years under consideration are marked by red bars (addition to original figure). 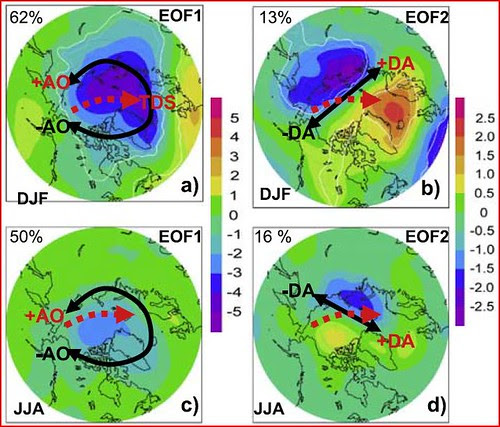 Figure 2 a to d of Wang et al 2008, Regression maps of the first two leading modes of variability for the period 1948 to 2008. Top two panels are for winter, bottom two are for summer.

Once again these graphics do not reveal the recent dominance of the AD as shown by Zhang et al (ref) as they cover a much longer period. However the general pattern they reveal is clear. The red dotted line and arrow is the Transpolar Drift, which has a major role in driving ice into the Atlantic sector where it can be driven out into the Fram Strait, or melted in the Atlantic Sector. Bitz et al 2005 carry out a study using a GCM to examine the processes at play in maintaining the sea-ice edge. They find that in most sectors absorbed sunlight is the major source of energy for melting, but in the Barents and Greenland sea it is ocean heat flux (63% & 60% respectively). So the typical flow of ice into these sectors maintains the ice edge against a continual and substantial heat flux.

However heat flux is also changing due to the AD. When the AD is in it's positive mode it draws warm water through the Barents strait. The increase in this is apparent in table 3 of Wang et al. For 2000 to 2003 the average is 3.4 terawatts (variance 0.34), 2004 to 2007 is 5.4 terawatts (variance 0.22). This represents a substantial (45%) increase in heat flux, which can survive in the sub-surface layers to promote melt in following years.

Wang et al note that the DA alone did not alone drive the crash of 2007. This is true, both winter preconditioning and the long term preconditioning of decades of loss of thickness set the stage for 2007. However the DA was the coup-de-grace in the events of that year. We now live with a post-2007 ice-pack. Maslanik has found a limited recovery of the pack, but that does not represent a recovery to pre-2007 state, nor is it indicative that such a recovery will happen.

Wang et al demonstrate that there is both an evidential reason to implicate the AD in recent episodes of record ice loss, and physical reasons for suspecting its role. I've previously fitted linear trends to the pre and post 2002 period using Zhang's finding of the emergence of the AD to justify that choice of breakpoint (final graphic here). That fit clearly shows 2007 as an outlier, not causing the trend. Personally it seems stretching the bounds of credulity to suppose that this apparent increase in loss rate is not linked to the AD's emergence to dominance. So as far as I'm concerned the AD seems to be the major driver for the recent acceleration of ice loss.

PS
Anyone who doubts the skill of the PIOMAS model, and is actually interested in challenging their assumptions (i.e. real sceptics), would do well to download the paper from the link at the end of this post and checking out figure 4, and associated text.

PPS, 19/5/13. It has come to my attention that some jerks in denial of anthropogenic climate change have been using this page to claim that the AD is driving sea ice loss. The AD has a role and is likely a part of the acceleration of loss post 2000. However in my opinion, backed up by the science, the main driver of sea ice loss is human activities, mainly CO2 emissions.

Chris, thanks for the link to Wang et al. Not very sporting of you to point out Figure 4 - but, but, but ... PIOMAS is a liberally biased model. MODEL. You can't trust models.

I have to admit that even I was surprised to see that it consistently OVERestimates extent. It's conservatively biased.

What struck me was how when driven by the weather conditions from NCEP reanalysis its agreement with observations of sea-ice extent is astonishingly close. It's almost like an exceedingly complex mathematical transform: Weather->Extent.

The overestimate of extent in winter is small - I wish I could say something intelligent about the reason for it. But I can't. Maybe I didn't pay close enough attention to Schweiger et al. ;)

I keep coming across examples of model skill that just hammer home the point that the wholesale dismissal of models is a sordid act of denial, not healthy scepticism.

Denialists! Shower of ponces, every last man jack of them.

Links provided as a translation service for non-UK readers. ;)