It's now coming up to a month until this year's minimum. I normally don't provide a running commentary of ice conditions as that's done more comprehensively elsewhere than my time will allow. Furthermore in my opinion earlier in the season short term events have less of an impact on the final minimum figure. However as we near the end of this season the game is still afoot.

Cryosphere Today's anomaly is now lower than any year since 2007. This is odd, aside from 2010, which had a low anomaly in mid summer, 2007 to 2009 had the lowest anomalies in the end of the melt season, reflecting late freeze ups. It will be interesting to see how the anomaly for this year pans out.

Also odd at this stage in this year's melt is the recession of the ice in the Atlantic sector (east) as opposed to the Pacific sector (west). At present this year looks more like 2010 than any other recent year, and despite the extent having closely tracked 2007 the form of the ice pack is markedly different from 2007. At present the forecast (ECWMF) for the region is a high pressure system similar to the negative index of the Arctic Dipole, which by Sunday 21/8/11, will subside leaving a mixed picture, with a suggestion by Thursday 25/8/11 of a classic negative phase AO. The negative index AD favours ice loss in the Atlantic sector and retention in the Pacific, and seems to be promoting significant melt due to warm air advected from Siberia. Neven has asserted that we're seeing is melt as opposed to compression of ice, he also reveals a record low for CAPIE. CAPIE is the ratio between sea ice area and extent. 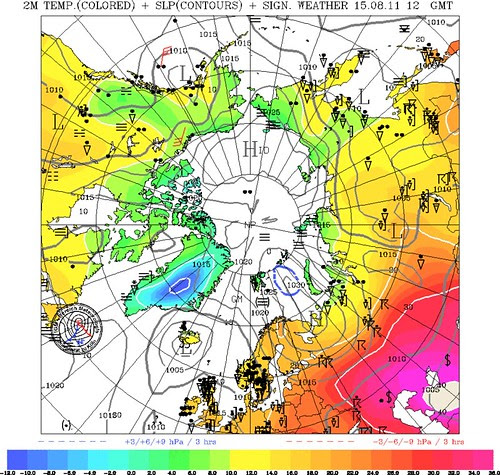 Currently the high pressure over the Pacific sector will be having a divergent effect on the ice there, due to the location of the pressure centre. This is because movement of ice is to the right of the prevailing wind, so that high pressure will be pulling the fragmented ice of the Pacific ice edge out into the open sea. This is why CAPIE is so low, there is massive spreading of the ice in Beaufort and Chucki and as extent is any area of >15% ice this is causing extent to rocket while area changes less (we'll see this more as the post 2007 regime continues), hence a low CAPIE. Over in the Atlantic sector the high pressure over Kara is drawing warm air (DMI) up over the ice edge, this seems to be melting it. I agree with Neven that this is the most likely conclusion because the high pressure winds would normally be expected to cause a divergence at the ice edge, given the high's location, yet we are seeing a retreat of the ice edge, not an advance and dispersion (as shown by Bremmen AMSRE images run as slideshow up to today).

It's worth pointing out that the AO is negative, and despite the ensemble mean suggesting an increase in the next 2 weeks, the correlation with observations once again shows a consistent overshoot at 14 day observations (bottom panel that page), as it did throughout June and early July when we saw substantial losses. That said we're close to the minima and the rate of decrease has defintely passed it's maxima. However on balance I don't see conditions for a massive melt-out in the Pacific Sector, surface insolation is waning now, in June/July it was at it's maximum.

I haven't a clue how this will pan out. It's quite feasible that after dispersion and a high degree of melting in Beaufort/Chucki the arrival of dominant low pressure after Saturday will cause the ice pack to converge again (the centre of the low will be off the pack) causing CAPIE to rise as extent falls. It's also feasible for the Atlantic sector to continue to recede.

We've had a late freeze 2010, a warm winter, and a lot of that ice is rather thin. Thin ice means increased susceptibility to weather, which decreases predictability.
Posted by Chris Reynolds at 12:33

I think is is odds on or better for a new record minimum this years for area, and a record for extent and volume figures are easily a new all time low which is bad news all round.

I had thought this year could have been the one to beat 2007. On balance I suspect it'll be too close to call (when taking into account uncertainties), or just above 2007.


But that could be my innate conservatism speaking. ;)