Some time ago someone told me about a secret military bunker. Being a sceptical sort of person I took it with a grain of salt, however I did keep it in mind to investigate and many months on (I forget how long) I've completed my investigation.

The story around this goes as follows: Many decades ago there was a place in the countryside south of Preston, Lancashire (UK) where something was built in the middle of a field, and my correspondent saw MoD (Ministry of Defence) signs around it. I have a bit of a history in the wider area because at one time I had a bit of a hobby hunting down secret bunkers, oddly I'd never heard of this one.

So first I looked at Google Earth (GE). 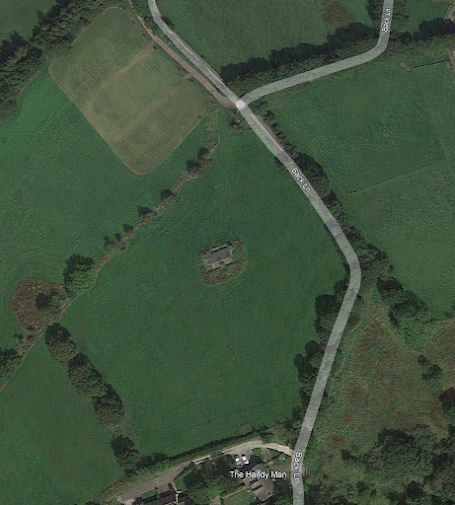 The site is a small installation in a field, currently without a driveway to it. However in earlier historical GE images there is a grass drive visible to the road junction directly north. Close examination revealed a pole mounted utility (electric or phone) passing near the installation. And so this investigation remained for some time until a weekend walking expedition happened to take me close to the expedition on my way back to get the bus home.
So in passing I took photos with my phone, lacking proper zoom the results were grainy, but good enough. 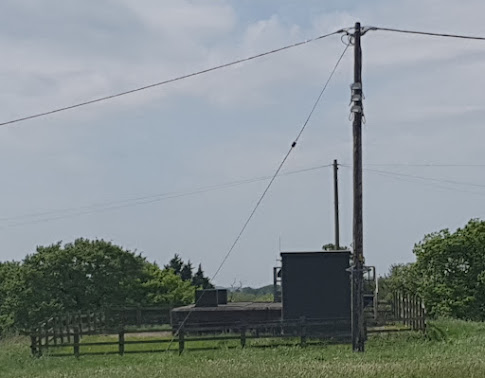 So now things became more clear. Firstly, on the road there were no phone hatches. For a serious cold war military bunker one would normally expect to see not just phone hatches but the sort of heavy duty square hatches associated with chamber access for deeply buried cables (to protect the phone lines from electromagnetic pulse (EMP) from nuclear detonations). Furthermore this site was served by the phone lines overhead (behind in this photo making them vulnerable). With regards power the site was served by insulated domestic type overhead power, which also serves local farms. On the wooden pole supporting this there are three boxes, implying a break off for each of the three phases of the mains supply, this in turn suggests something with a need for three phase power. A motor might need all three phases of power.
Also, hard to see in this photo, there is a small UHF dipole on the upper leftward edge of the upright equipment cabin. This would not be something I would expect for a military installation like this, no need to have security guards here. However this site does have line of site of only about 6km to a major communications mast cluster, and at least one of these carries utility services. Normally a yagi beam antenna (like a TV aerial) would be used for utilities outstations to communicate to a central hub, in this location with a short distance and line of site that would be superfluous. The band used for such command and telecontrol is in the UHF band.
So by now I was pretty convinced that this site had something to do with utilities of some sort, and the likelihood of a three phase motor needing power to shift some fluid of mass made me think a water pumping station. However places such as Royal Observer Corps bunkers often had a local cover story of being pumping stations.
Earlier today, after many weeks of inaction on this matter I hit Google after pondering how close this might be to the Thirlmere Aquaduct, which was a Victorian era gravity-driven channel supplying water from Thirlmere in the Lake District to Manchester.
In my search I found that someone called Boyd Harris on Twitter had posted the following image of a map. 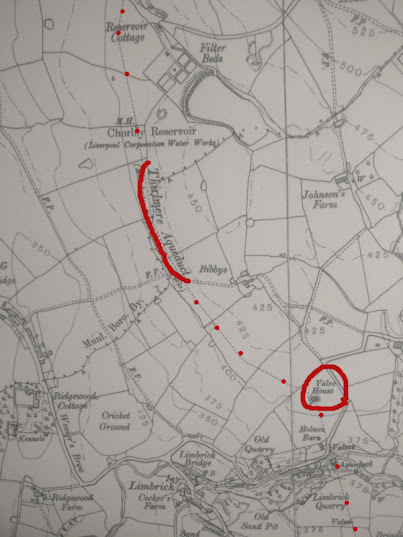 I have annotated the image, underlying the label Thirlmere Aquaduct and marking its route with red dots. And our unknown installation is labelled on this old map as a valve house, a label not shown on modern Ordnance Survey maps, although they do show the installation.
Interestingly Wikipedia states that this is gravity driven, and given the cross-sectional design of this probably doesn't really allow for pressured delivery, so perhaps the three phase motors I suspected as pumps actually just run sluice gates.
Why would there be MoD signs when this was upgraded? During the Cold-War it was not uncommon for utility assets of potentially strategic importance to involve the Official Secrets Act being invoked. So perhaps this accounts for the signs?
Posted by Chris Reynolds at 09:40