What would it take to get to 1 million kmsq?

I now have data to 15 July for regional extent (thanks Wipneus). With two months to go to the middle of September, the period for which the minimum can reasonably be expected, what would it take to reach 1 million kmsq by this September?

This shouldn't be surprising since losses are not linear, as one gets into August the loss rate drops as the sun sinks towards the horizon. The situation is like being on a motorway driving at 70mph and working out whether you'll reach the destination on time. You calculate that at 70mph you'll get there on time. But you end up being late because you neglected the time taken to get from the junction at which you leave the motorway to your destination, on roads which are far slower.

So this linear approach isn't really satisfactory. As an alternative I have taken the year of  the most aggressive summer loss of extent in the Arctic Ocean, that being 2012. I have applied the daily losses from 15 July to the extent on 15 July 2015, then multiplied all of those losses by a single number. I vary that number until 15 September extent hits 1 million kmsq. It turns out that 1.58 times the daily losses of 2012 gives a 2015 minimum of 1 million kmsq.

1.58 isn't a lot is it? So surely this is a reasonable expectation for this year?

Judge for yourself, here is a plot of the synthetic 2012 X 1.58 loss profile applied to this year from 15 July. 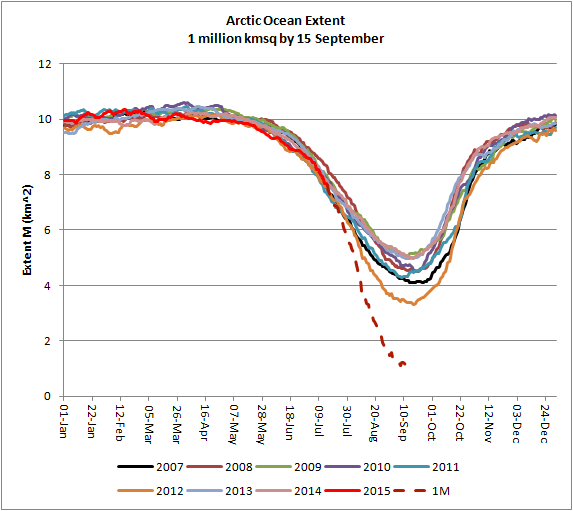 * Note, 1 million kmsq is usually defined in terms of NSIDC September average extent, here I am using the less tight definition of one day under 1 million kmsq.
Posted by Chris Reynolds at 05:09

Completely agree with you. I have noticed that according to NSIDC, extent has been getting dented a bit in the last week with +100,000 losses. What's the reasoning behind this, and will this rate of decline slow down (as I assume it will)?

As the peripheral seas take up more of the overall extent loss, later this month and into August, I expect rate of loss in overall extent to increase.

Once it gets further into August, the rate should slow down because the sun is getting further away?

No, it's because the sun drops in the sky until over much of the pack it sets in September and the long night begins.