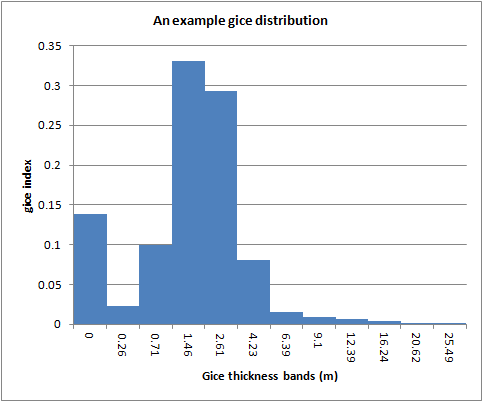 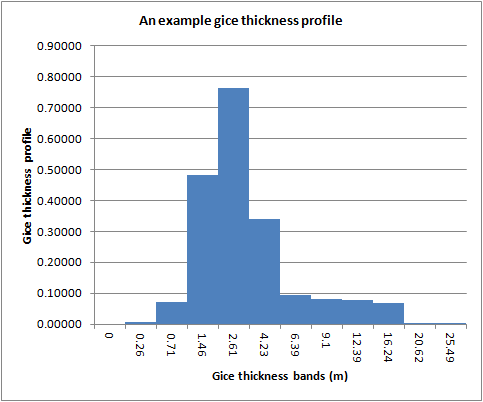 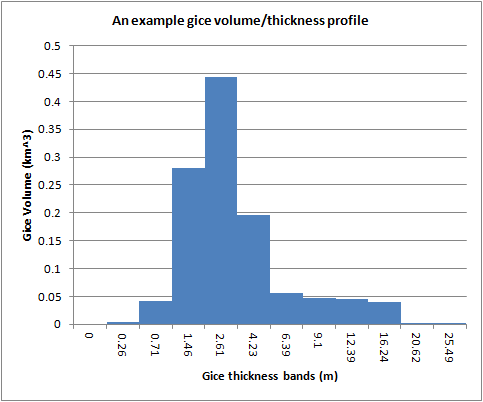 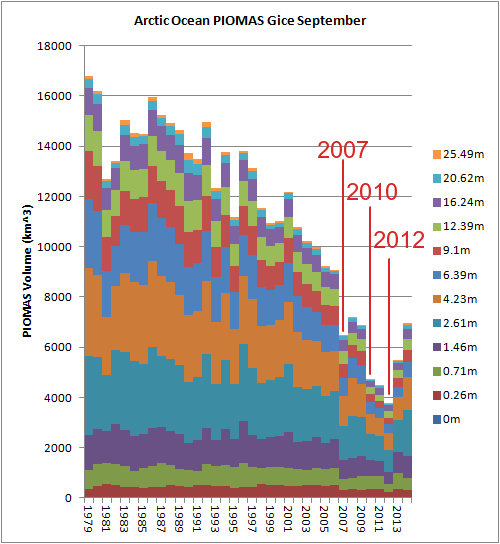 In that graph the colour bands follow the same order as the key on the right hand side of the plot.
Posted by Chris Reynolds at 12:59

The further problem I have been having is that my calculation of monthly average gice isn't matching up with the monthly gice data. For this reason I will be using monthly gice for long term work. But for comparing state in 2015 (for which monthly gice is not yet available) I will have to use the daily data. So in April state will be calculated using 30 April data.

I enjoy reading your blog. Thanks for posts like this one that attempt to explain the analysis in plain English. A while back you wrote about a mono-modal spike. That was quite thought provoking for me. I wonder if the implications of your main graph in that post don't provide a possible explanation for why the arctic ice loss might be slowing down such that the Gompertz curve seems like the best fit. If you extrapolate that graph into the future I wonder if it will play out something like this: http://s1298.photobucket.com/user/bragsd1/media/PIOMAS%20graph%20spike%20speculation_zpsow2cyl7w.png.html?o=0
Anyway, I think you are on to something by breaking down grid thickness. Cheers! Brent Ragsdale-Kansas City

Thanks for that graphic Brent.

It's a very impressive visualisation and I think captures what we're going to see (on average) in the decades to come.

You've illustrated the decline in the peak of thickness as ice thins with warmer winters, and the resulting decline in peak volume. The 'long tail' of thickness towards the higher thickness is also to be expected to persist due to ridging of ice and survival of ice off the Canadian Arctic Archipelago.

It will be interesting to see later this century if volume will decline as your illustration suggests or if there will be a rapid collapse. Some of the research suggests that while there is no 'bifurcation' in the transition to a seasonally sea ice free state, there may be such a non-linear collapse in the transition to perennially ice free. e.g. Eisenman "Factors controlling the bifurcation structure of sea ice retreat."

It's not me that is onto something with breaking down grid thickness. Dr Zhang is aware of this blog and the use Wipneus has made of the gridded data, and Dr Zhang made this sub grid thickness data available some time ago. I have actually been rather slow in getting round to looking at it. I suspect Dr Zhang might have been prompted by my thickness distribution treatment of effective thickness - which is useful but doesn't tell the whole story.