I've recently been looking at the PIOMAS Gice data, about which I will explain briefly here and in more depth later this month. Of the areas I have been looking at one that has struck me is the Laptev Sea, the other is Baffin Bay, on which I will blog in due course. But for now, Laptev:

Last year saw the one of the lowest late summer extents on record in the Laptev Sea. 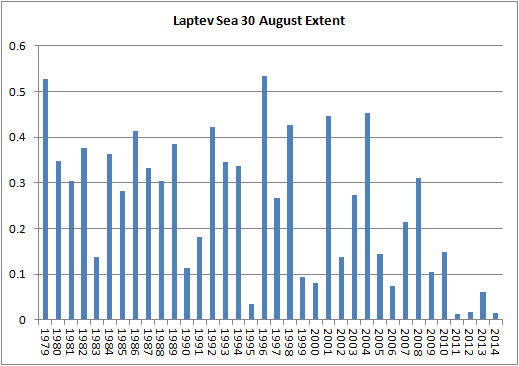 What is striking about that plot (to me at least), is the extreme variability of the series, in this blog post I hazard a guess as to one of the reasons for this.

I've plotted September volume for Laptev, in terms of Gice. Gice is the sub grid thickness distribution within the PIOMAS model, the legend for the different colours in the following graph follow the order in the columns of the graph, those thicknesses are the centre points of bands of thickness used within each grid cell of the PIOMAS model. I usually present plots using 'grid box effective thickness, which is the thickness weighted integral of the volumes at those thickness points. Here I am showing what the PIOMAS models as thickness, calculated across the whole region of the Laptev Sea. 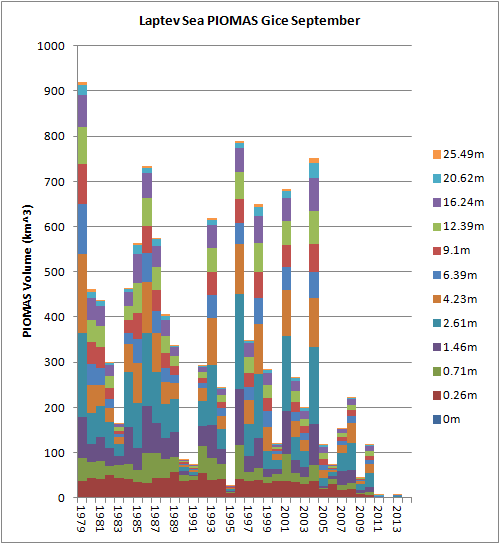 So in past years ice as thick as 16.24 metres is modelled by PIOMAS as having a significant presence, even in late summer.

But back to the issue at hand, why is that plot of PIOMAS thickness, and the plot of extent above, show such variation? The first thing to look at is initial ice state. So I produced the same plot for Laptev Sea ice volume in June and April. 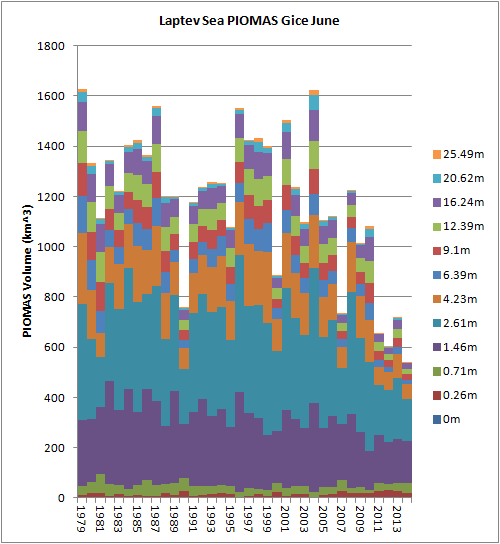 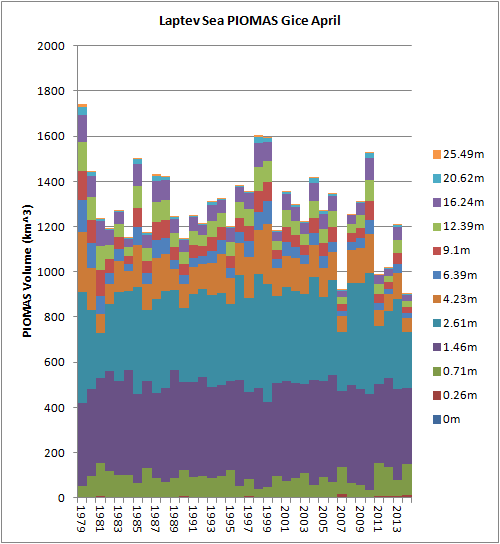 Comparison of those three plots should be easy, just hold the mouse over a given year and scroll up and down to see how things pan out. In my view of those graphs, while April 1979 stands out as very high volume carrying through to the summer, April 1998 and 1999 break that pattern, with 1998 carrying through to high summer volume, while 1999 does not. So initial volume as a single explanation doesn't seem to be a strong hypothesis, which is not to say it plays no role.

By June the pattern of high volume leading to high September volume appears stronger, but still has occasional years' breaking the pattern. So at this point I will turn attention to the atmosphere.

I have taken a series of September high years and low years. The high years are taken as those years with volume in September exceeding 600 cubic km, the low are more arbitrarily taken as years that are lows given the surrounding few years. In each case those years selected are visible in the list of years on the following plots. Not very scientific, but this is just a blog. Using this set of high volume and low volume years I have plotted average anomaly from the 1981 to 2010 sea level pressure. 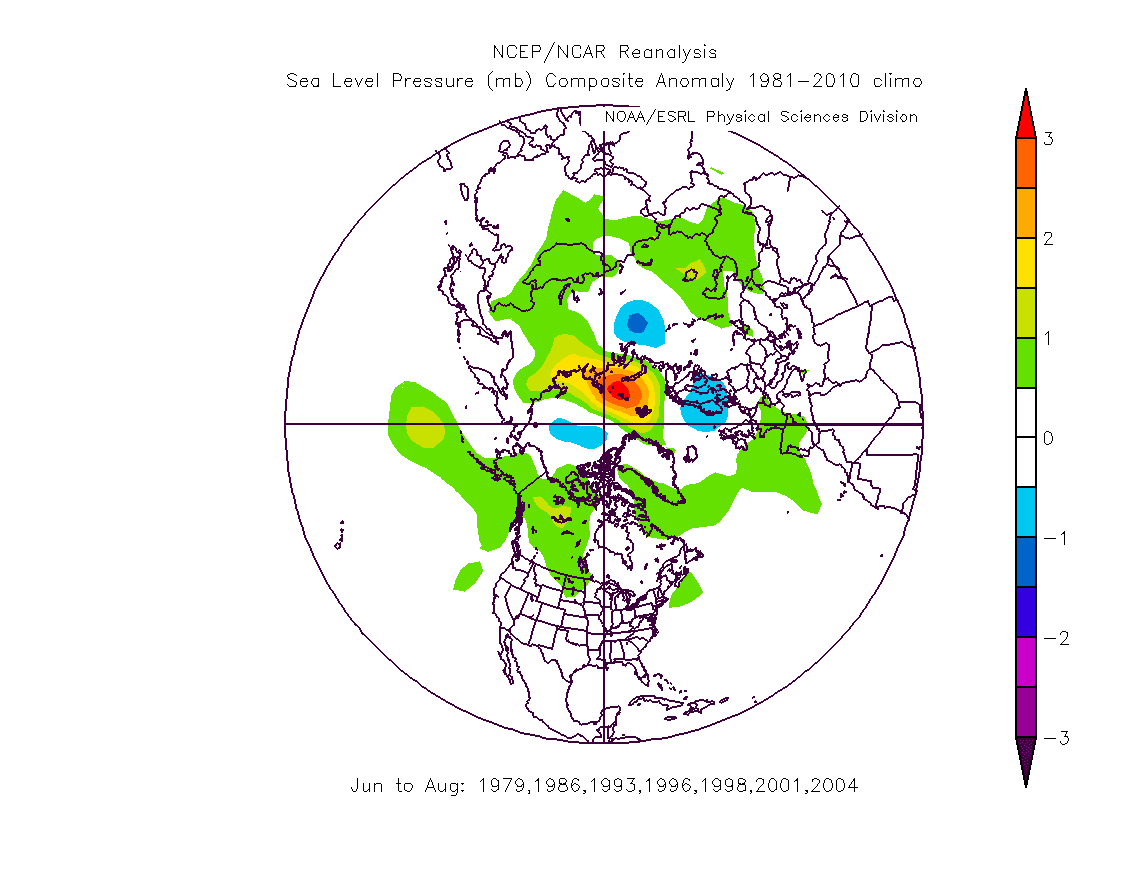 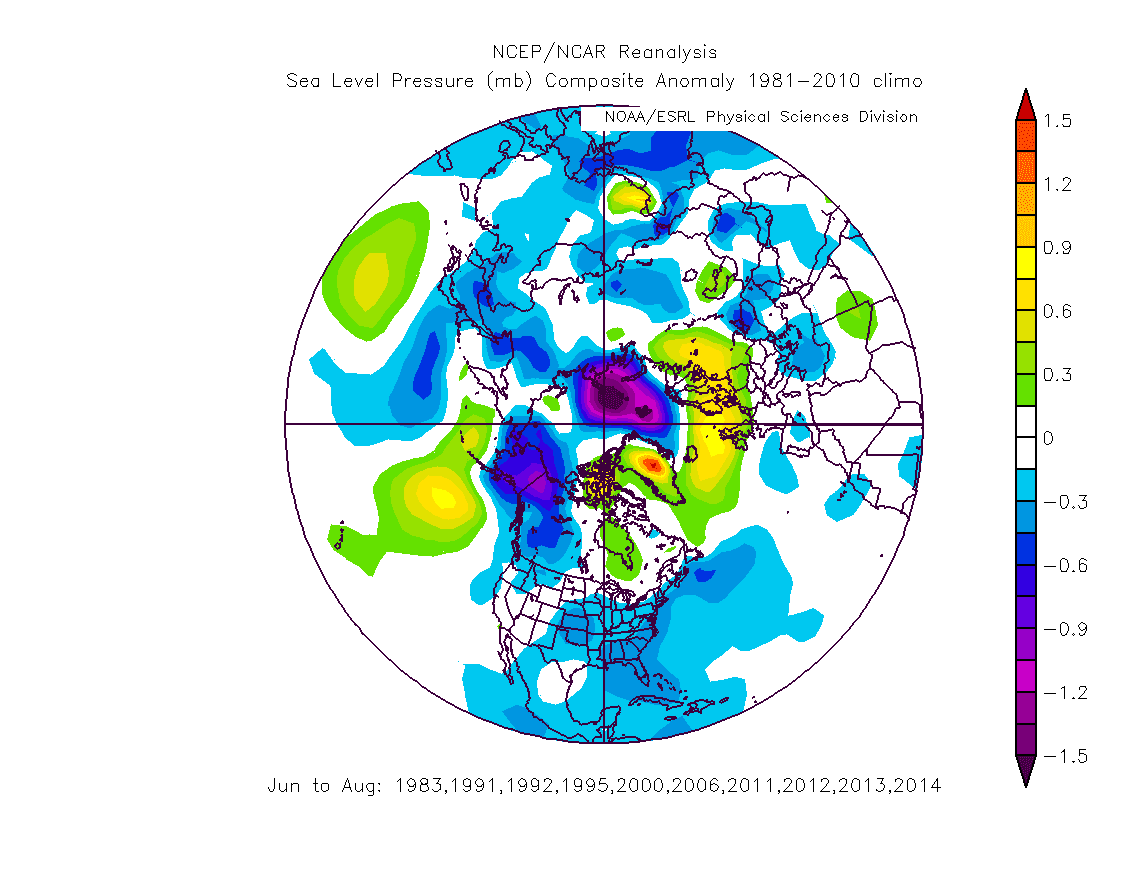 The area I concentrate on is near the centre of the plot in the top right quarter. In high years the average pattern has a high pressure, in low years it is a low pressure. This might work as a factor because in the Laptev Sea (Between the pole and the Siberian coast top left quarter) the high years have an anomalous airflow poleward away from the coast, while in the low years the general airflow is towards the Siberian coast from the pole.

What this might mean is that the high volume years could be caused in large part by summer weather in which ice is blown towards Siberia (spreading ice towards the coast and keeping extent up) and the winds across the Laptev Sea are cold winds from over the ice pack which reduce volume loss. In contrast, in the low years winds blow from the Siberian coast poleward (compacting ice away from the coast and lowering extent), and the winds across the Laptev Sea are warm summer winds from Siberia which increase volume loss.
Posted by Chris Reynolds at 13:18

Since the Gyre forms the largest ridges on the Canadian side of the Basin, the transport through the circle [Basin to Beaufort, Chukchi, ESS, Laptev and Back to Basin] has Laptev as the last step in any recovery, when the entire Gyre is refilled with MYI. It took several sequential years of a dominant transpolar drift to cause the drastic level of MYI loss; it will take a similar number of years to refill the gyre. And with the typical prevailing winds, Laptev will be last to get it's MYI back.

I agree, these drifts of ice are a key factor in understanding the pack.

However with regards a recovery. I am not convinced at all that this is likely. 2010 saw a similar influx of multi-year ice into Beaufort/Chukchi/East Siberian Sea. This led to extent being held up in 2010, but the volume (thickness) loss resulting led to the 2011 (matching 2007) and 2012 (new crash) summers. It did not lead to a recovery.

It is feasible that we are seeing the makings of further losses in the next few years, despite the prospect of 2015 being a mundane post 2007 year.