Rotten sea ice in the summer?

The 2015 melt season has begun, but as is the nature of a near sinusoid, the peak is rather boring with a small rate of change. So to alleviate the boredom, here's a post about compactness. ;)


First some definitions, bearing in mind that the source data is gridded, where the region of the Arctic is broken down into grid boxes and concentration of sea ice is determined for grid boxes using satellite readings of microwave emission (some detail here):

Because extent covers all grid boxes with a concentration of 15% or more, while area is just the total area of the sea ice, extent is always bigger than area. So compactness by definition varies from 1 to 0, 1 is very compact ice, 0 is when there is no sea ice, i.e. area = 0.

So compactness offers us a chance to answer a question that has cropped up over many recent summers. True, it it not usually phrased as a question, but as as a statement along the lines of: "The ice this summer is unusually fragmented". The question being: Is there evidence of increasing fragmentation of ice using the index of compactness?

To do this analysis I have chosen three periods, each is the 7 day average centred on the stated date:

The latter period, Autumn Equinox, is rather similar to results from late summer, for which I have used the seven day average centred on 1 September, so the Autumn Equinox does not seem to be suffering from the effects of early season ice growth. Rather than use arbitrary periods throughout the summer I prefered these fixed periods simply related to the fixed solar cycle.

Taking the whole Arctic region, as shown in the maps from NSIDC, e.g. here, the evidence of increasingly fragmented ice is not very strong. 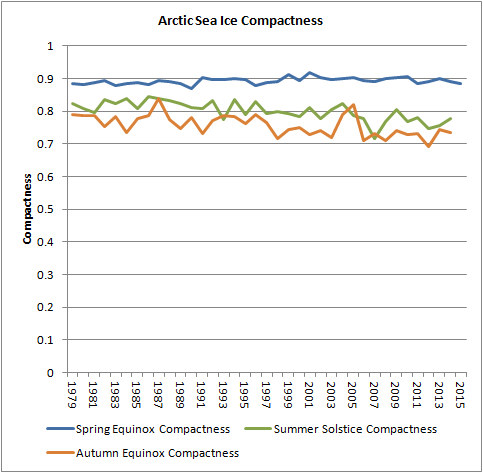 The region for the above is the whole domain of NSIDC gridded data, the region shown in this map. In that map you can see the actual grid boxes used at the edge of the ice and land.

OK, so looking at the whole domain of the data we get little indication of a decline in compactness, maybe we need to zoom in a bit. To do that here is the Arctic Ocean, which as usual is defined as Beaufort, through to Barents, Greenland, Central and the Canadian Arctic Archipelago. 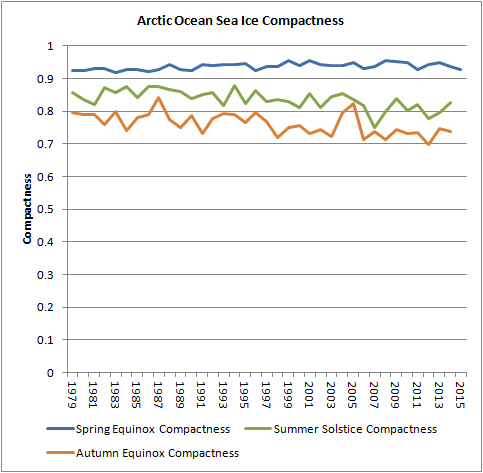 Again, nothing really striking and no evidence to suggest masses of 'rotten ice' as has been claimed by many amongst the amateur community in recent summers. 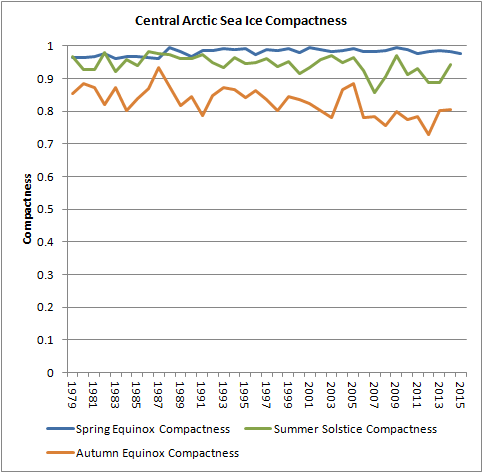 This is the source of the lack of strong decline in compactness, as will be seen, and the large total area dominates the behaviour of compactness in the whole NSIDC concentration domain, also in the whole Arctic Ocean. 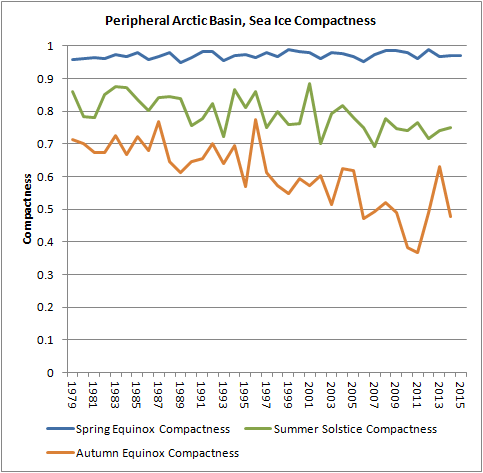 By late summer, at the Autumn equinox, compactness has fallen from around 0.7 to around 0.5. This means the ratio of area to extent has fallen such that within a grid box where there is ice defined as extent (>0.15 or 15%) one might expect that in the 1980s one would have 3/10 open water. But by the post 2007 period one would expect to see 5/10 open water, or 1/2 open water. This is a difference that could reasonably be expected to be seen using something like MODIS. The exception here of course is 2013, which is quite an outlier.

So, is there evidence of increasing fragmentation of ice using the index of compactness? Yes, there is in the peripheral seas of the Arctic Basin.
Posted by Chris Reynolds at 13:39

Seeing the 2011 low and 2013 high makes me wonder if there's a correlation between autumn compactness and the following summer's minimum extent.

Can't see why. More dispersed ice should if anything mean more volume growth over winter. Excel is tied up right now processing Drift Age Model gridded data (more to follow on that), but I will have a look at it and get back here.

Sorry, I meant the peripheral autumn line in the last graph.

Only eyeballing it but those two years, the one about 96 and the trend stood out.

Could be that the averaging is including large open water areas where compactness is obviously zero and the ice that forms there is typically thinner by September?

Of course I could just be reading the graph wrongly and have mixed up cause and effect...

It's OK, I presumed you meant the last graph.

I've taken my data for the peripheral seas compactness. I've also taken data for total (all Arctic) extent at minimum the following year. To get rid of the complication of trends I have detrended by taking interannual differences for each series.

That the correlation is positive suggests that both year on year differences act together. That it is so small suggests this is only a weak relationship. For a 34 year series the 99% level of confidence is only for a correlation of around +/-0.42 or greater. This result is far to small to be convincing.

I forgot to add.

The calculation of compactness is simply Area / Extent. So it cannot include open water, except for the open water included in the grid cells that have ice in. It is that open water that compactness gives an indication of.

Well that's that one shot down then :)