January's PIOMAS data was released yesterday, it shows that the volume gain over 2012 has decreased massively. But does this really mean the increased volume of 2013/14 is going to go away within one winter?


First off the usual animated gif of map plots of the PIOMAS gridded data, blue is 2m and over, red is under 2m thick.

Thickening continues as is to be expected, more of note is the sizeable export to Beaufort and through the Fram Strait, which can be seen in the movement of the blue mass of thicker ice. HYCOM also suggests that there is substantial export up into the East Siberian Sea (ESS), i.e. towards the Eurasian coastline in the upper left quadrant of the above plot.

The following graph shows the Central Arctic on the right side scale, this is four times the left scale used for the rest of the Arctic Ocean's regions. In terms of PIOMAS volume, conditions outside the Central Arctic are more or less similar to recent years, as discussed over last autumn the volume increase is from within the Central Arctic, and as is shown by the above map plot that ice is being eroded by export to Beaufort, Chukchi and the ESS and export out of the Fram Strait where the ice melts off Greenland. 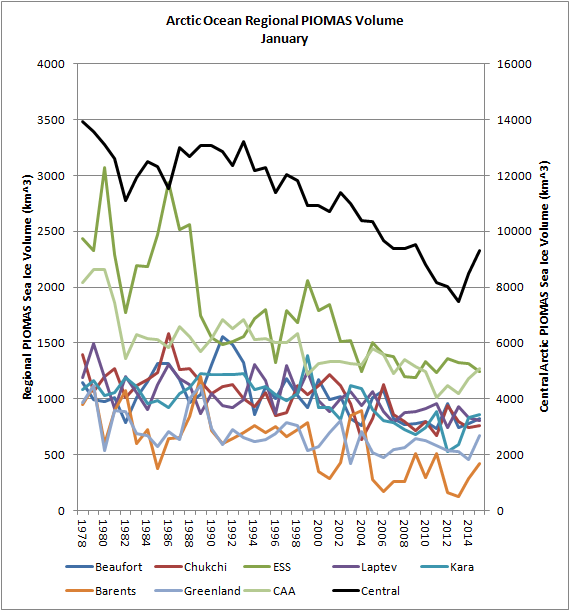 To get a handle on what is happening to the increased volume I have plotted the volume for each month since January 2013 as a difference from volume in the same month in 2012. I have used 2012 because that was the last major crash in summer extent and volume. 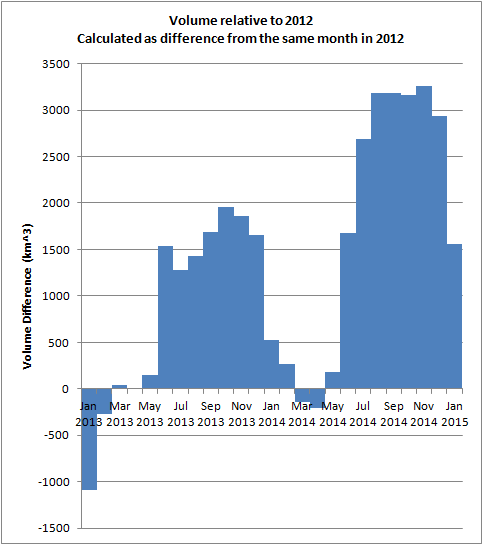 Does this mean that the volume increase has gone? Are the same processes at work in 2013 and 2014?

To help understand what is going on here is a plot of January thickness distribution. Note that Arctic Ocean excludes Okhotsk, Bering, Baffin, and Hudson Bay. The Gulf of St Lawrence is included in my derived data, but as it plays no role in the ocean modelling for the PIOMAS domain (it would act like a land locked sea which it is not) the Gulf of St Lawrence is not modelled in PIOMAS, despite being a region in the Cryosphere Today regions. 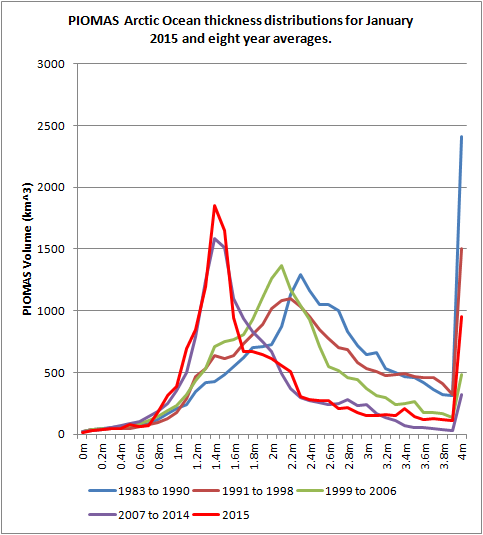 Despite the increased volume of the thickest ice, January 2015 is seen to be very similar to the 2007 to 2014 average. A tall monomodal spike reveals the large expanse of first year ice and remnant thin dispersed pack from last summer, with the lead up to that peak tracking the 2007 to 2014 average as discussed in an earlier post. Above the spike, now peaking around 1.4m in January, there is a more gradual fall off to zero as ice that survived last summer but was left very thin (or dispersed) now thickens up, building into thicker categories of thickness. The difference from the 2007 to 2014 average (purple) is seen in the 4m thickness band, which as I have explained previously is actually ice at or above 4m thick. What this spike of thick ice volume is saying is that there is more ice over 4m thick in January 2015 than in recent years.

This then is the issue, despite the presence of a mass of thicker ice off the Canadian Arctic Archipelago (CAA) in the Central Arctic region, most of the volume is first year or very thin multi year ice (ice over 1 year old). Due to thermodynamic thickening this is thin enough for heat flux through the ice to be great, and this heat flux causes new ice to grow onto the underside of the existing ice. So most of the pack is thickening in much the same way as in 2012, and other recent years. From June 2013 and 2014 (poor ice melt years) the difference from 2012  (excellent melt year) was revealed and a positive volume difference built up. Then in the autumn this difference was maintained as the volume increased by a similar rate as 2012, until January where the volume had built up to such levels that the gains of volume in 2013 and 2014 are subsumed in the massive volume gain from thinner ice.

So in short the enhanced volume increase over winter from thinner ice and open water at the end of the previous melt season is swamping the more modest rate of gain of volume from thicker ice, which being thicker thickens at a slower rate.

Using the PIOMAS data I have calculated, for the Arctic Ocean, September and April (following) volumes from ice above and below 2.5m thick. That thickness demarcation is chosen to admit the bulk of the thicker ice slope of the monomodal spike, while omitting thicker ice that is almost certainly multi year ice in April. Then I have calculated the volume gain from ice above and below 2.5m thick from September to the following April. 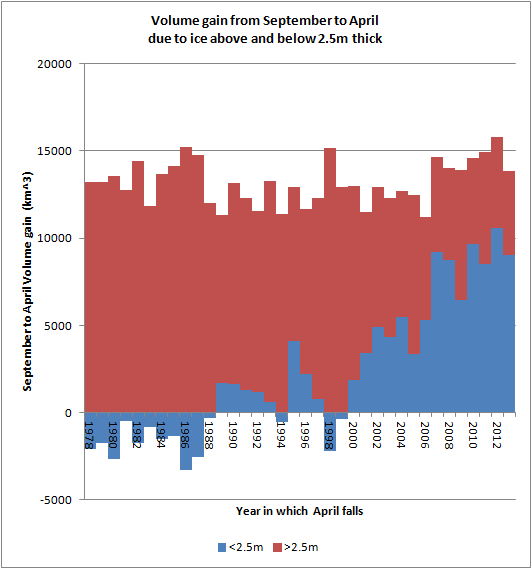 This reveals a strong shift towards most of the autumn/winter ice volume increase coming from thinner ice, as is to be expected given the overall thinning. Since 2007 the bulk of volume gain over winter has been from ice under 2.5m thick. The intriguing part comes when I look at the relationship between volume at the start of the freeze season in September and volume at the end of the freeze season in April. 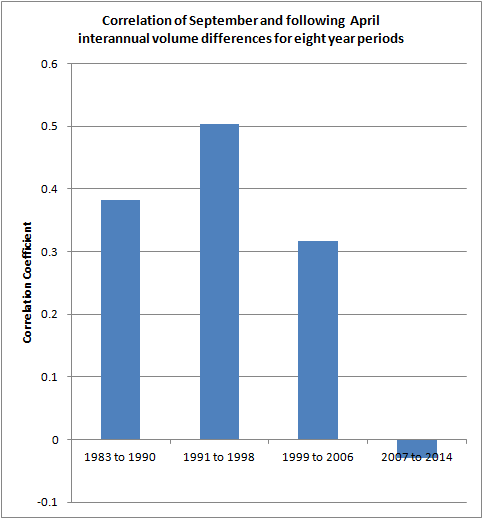 The use of an eight year period for correlations is too short to be anything but suggestive, however this suggests that since 2007 there has been a decoupling of September volume and that of the following April. This decoupling is suggested by the crash in correlations shown above, but it is no more than suggested. However the presence of the strongly negative thickness-growth feedback should be expected to produce such a result.

In conclusion, I do not think that the volume gain of 2013/2014 is in the process of disappearing in just one winter. Come the summer I expect it to reappear as the thinner ice volume on the periphery of the Arctic ocean declines, while the thick stuff doesn't decline as much.

I'd like to close by offering a considered estimate as to what April's peak volume will be, but I can only offer a rough guess, about 1k km^3 over recent years, or over about 24k km^3. I've not committed any serious thought because I've been rather distracted having treated myself to an PSA2702 spectrum analyser, which is now my favourite gadget. :)
Posted by Chris Reynolds at 13:21

I think PIOMAS is incorrectly assigning thicknesses of 4+ meters along the CAA. Have you looked at the CryoSat map for last fall yet?

Cryosat 2 shows less thick ice than last year, I think it's wrong. I'm not persuaded at present by Cryosat 2 due to issues like the use of climatological thickness of snow in freeboard calculation. It's a new product and it will take me some time to be persuaded (sorry I'm naturally sceptical like that).

ICEbridge might help decide.
http://nsidc.org/icebridge/portal/
But the catalogue doesn't seem to provide data after Autumn 2013. I've used that data before and have found it reasonably close to PIOMAS.

PIOMAS provides a consistent long term dataset, as to what the actual volume is I'm not sure (likewise with area & extent). But I use datasets as consistently processed data to allow long term comparison, not as 'the truth'. If PIOMAS shows volume (thickness) is up this year, while Cryosat 2 shows it isn't I am minded to prefer PIOMAS as a known and proven metric. However I do seem to recall working out last autumn back on the forum that PIOMAS and Cryosat 2 were within the uncertainties for PIOMAS (Schweiger et al - Oct volume has an uncertainty of +/-1.35k km^3).