In my mid month miscellanea post earlier today I posted a list of the top ten wettest summers, four of those are years from 2007 to 2013. Just how odd is this?


I've used Met Office rainfall figures for the United Kingdom, from here. The stated summer average (JJA) has been ordered in descending order of total rainfall to give the following top ten wettest years. The total series is from 1910 to 2013, so is 104 years long.


It is notable that four of that ten are years from 2007 onwards, indeed 2007 and 2012 are both years with severe flooding events in the UK. The period post 2007 interests me because of the new pattern of atmospheric circulation in the northern hemisphere that has been a feature of most summers since 2007, apart from July 2010 and the summer of 2013. I've blogged on this feature previously, perhaps the best summary post is here.

In order to preserve the statistical distribution of rainfall in the data I have opted for a monte-carlo based assessment of probability, rather than an algebraic one.

I have loaded the data into an array and with each iteration of the subsequent calculation have re-seeded from that unchanged source data array. The source data is copied into a parallel array, and the data in that array is then shuffled by swapping randomly selected pairs of rainfall amount 500 times. Thus I have a randomised set of the original time series, and the occurrence of years from 2007 to 2013 is then identified from the top ten rainfall amounts in the shuffled data.

In short I am answering the question: How likely is it that four of the top ten rainfall years are found to be between 2007 and 2012?

The probabilities of finding N years that lie between 2007 and 2013 in the top ten highest rainfall amounts over the UK are listed below.

So in plain English:

No atmospheric pattern over the UK holds sway in every year, in 2013 the new summer circulation pattern didn't appear (I suspect due to slow ice melt in May), but it did in 2011 and was present in 2010 apart from June, as is shown by correlations with the summer pattern. 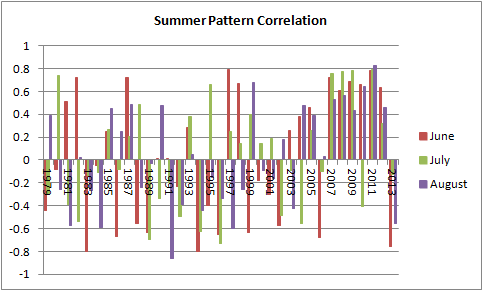 However this pattern increases the chance of extreme wet summers (in the top ten), and so far in the years the pattern has manifested we have seen 4/6 occurrences of heavy rain, with 2/6 years had severe flooding events. Those are not good odds, and if they persist will see a massive increase in flood event statistics in the UK.

This shift occurred in 2007, simultaneous with a new pattern of atmospheric circulation, and the start of a new regime in Arctic sea ice, featuring unusually aggressive sea ice loss, is not an accident. There is a link between exceptional summer UK rainfall, severe UK summer flooding events, and the loss of Arctic sea ice. As I have argued recently, the rate of sea ice loss indicates that the process is more the ice driving the changes, not the atmosphere driving the ice, as 2013 indicates.

Therefore the UK is experiencing cooler wetter summers, likely as a result of sea ice loss. And this has lead to damaging flooding events in 2007, and 2012. This is not happening by chance, it is climate change, ongoing and causing damaging consequences to lives, property and agriculture.
Posted by Chris Reynolds at 11:29

Over at Neven's blog DCS has been good enough to post the equation for working this out, it does get the same result, shows I needn't have bothered with the monte-carlo approach, and shows me where my algebra was wrong (not my strong point).

Using a hypergeometric distribution gives about the same result:

I'd rather calculate the probability of four or more (instead of exactly four) of the top ten years being after 2006, which is about 0.001378.

Interesting post, Chris. I agree with the IPCC in terms of the increasing likelihood of extreme events occuring and that human causes dominate by far; I also accept the Met's caution about attribution for specific weather events: the noise of weather in the UK makes it harder tends to mask the signal of climate trends - but we have to be concerned about the latter.

I was wondering whether this sort of analysis would also apply regionally within the UK.

I work for a utility in the south west of England and we have rain data from Environment Agency guages back to 1931.

The most 'clustering' of wet seasons (again, in their top 10%) that is evident are a couple of groups of 3 that land within a 10year period:

Anyway, interested in your views on whether the sorts of linkages / trends become harder to discern, statistically, as you discrease in geographical scale.

Thanks for the useful perspective.

If you look at the latest Met Office news release, here, you'll see that just north of Liverpool (Crosby IIRC) there's a tiny region that's had less than average rainfall. While the whole of England is high, while not a new record.

I suspect an orographic role in the below average/average rainfall in the northwest. I live north of Manchester and while I've been watching flooding down south, we've not had exceptional weather here. But the prevailing winds have driven air up over the hills of Wales, or the fury of the storms has hit Ireland, leading to us having a lot of wind, but unremarkable rainfall.

Another issue more pertinent to summer is that tracks of intense rainfall have a large swath of latitude in which to hit the UK. IIRC in 2007 the tracks of rain bands were notably down south. But in 2012 there was a succession of drawn out fronts (west to east) dropping intense rainfall across the north of the UK. During a period of some weeks that this pattern repeated I was flooded out - hence that atmospheric set up is burned in my mind ;) - my point is that in northern and southern England under such a pattern things could seem normal.

By averaging over the whole UK I hoped to avoid all these sorts of problems. In particular the issue of where the jet in summer has been aimed, this has not been targeted consistently throughout the years concerned. But the UK data shows what it shows.

For completeness, here are the years from 2007 onwards in the countries of the UK (Met Office data):

My overall set of post 2007 years in the top ten is the intersection of those sets.

And James Screen finds that for a grid box of NW Europe the years post 2007 are not outside the range of natural variability, but:

"The six summers from 2007 to 2012 were all wetter than average over northern Europe. Although none of these individual events are unprecedented in historical records, the sequence of six consecutive wet summers is extraordinary."