UK Summer Rainfall - Some notes on the Jetstream.

I've been digging a bit more into record UK rainfall, not a major revelation, but I thought it worth blogging as this blog is essentially my on-line notebook. I don't intend to blog on summer rainfall in the UK again until I've seen what this summer brings.


I have taken the Met Office UK rainfall data post 1948, source data here. 1948 is chosen because this is when the NCEP/NCAR reanalysis goes back to, and that's what this work comprises of. The average of the whole series is taken, and this is used to calculate the top wettest and dryest years with 20% more rainfall than average for the summer (June, July, August) total.

The dryest years are not the direct aim of this post, however as I'm posting so many graphics, for completeness I will briefly discuss. 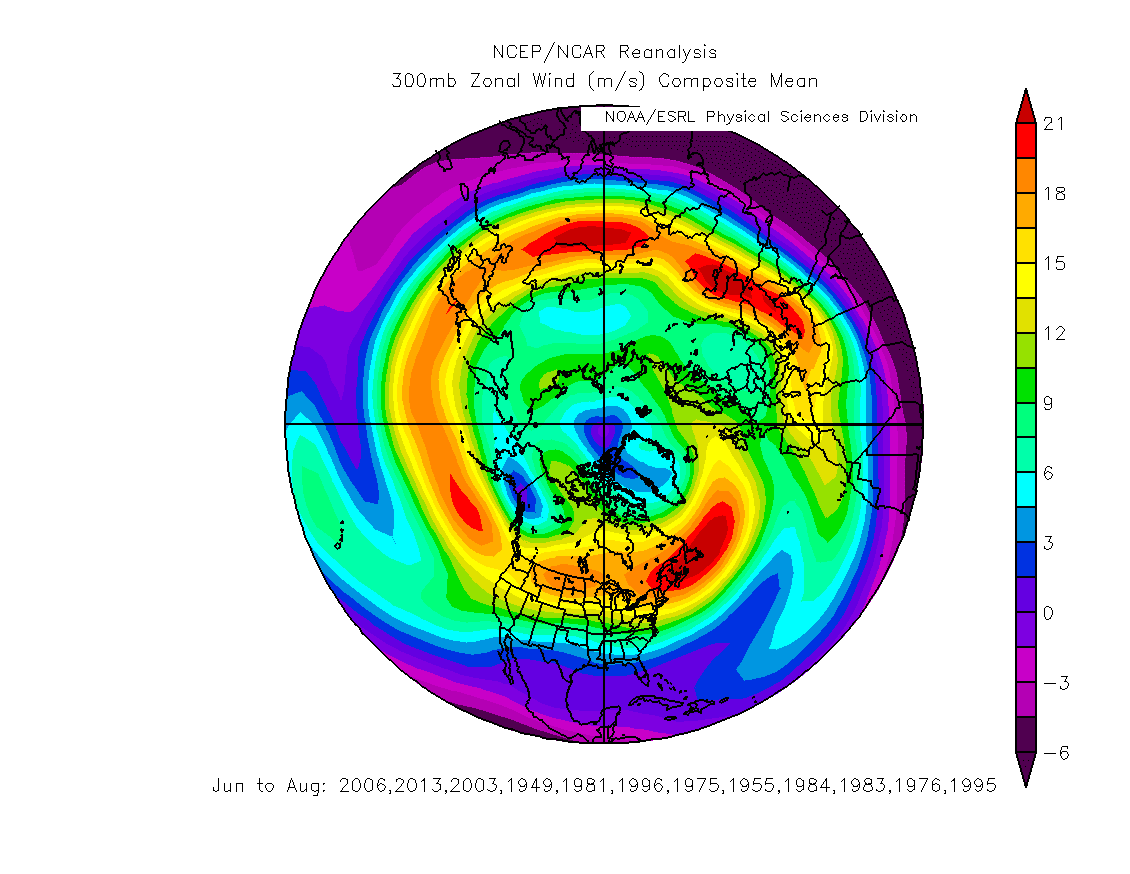 The average 300mb zonal wind for the wet years shows a jetstream (oranges and reds) deviating as it reaches the UK/western Europe. This is the cause of the dry weather, the jet isn't bringing in low pressure systems with their attendant rainfall (Note that zonal wind is the wind component circling the earth, positive velocities mean the movement is from west to east, negative is from east to west). The cause of this deflection in zonal wind is apparent in the 500mb geopotential height (GPH) field. 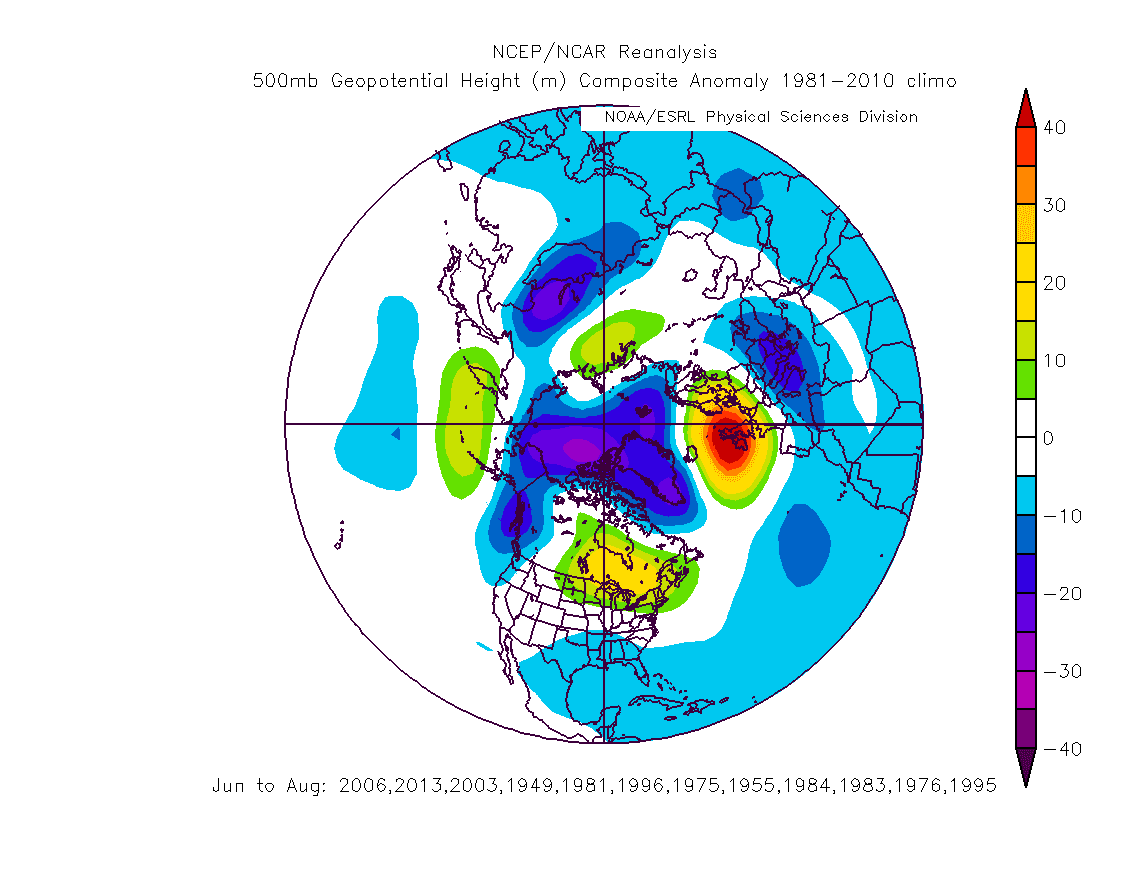 The red over the UK is a rise in the height at which the 500mb pressure level is found, by in excess of 40 metres, this is a blocking high which blocks the jet in the dry years, leading to the dry summers.

Looking again at the 300mb level to find the average position of the jetstream, below is plotted the 300mb zonal wind for the wettest series of years before 2007. 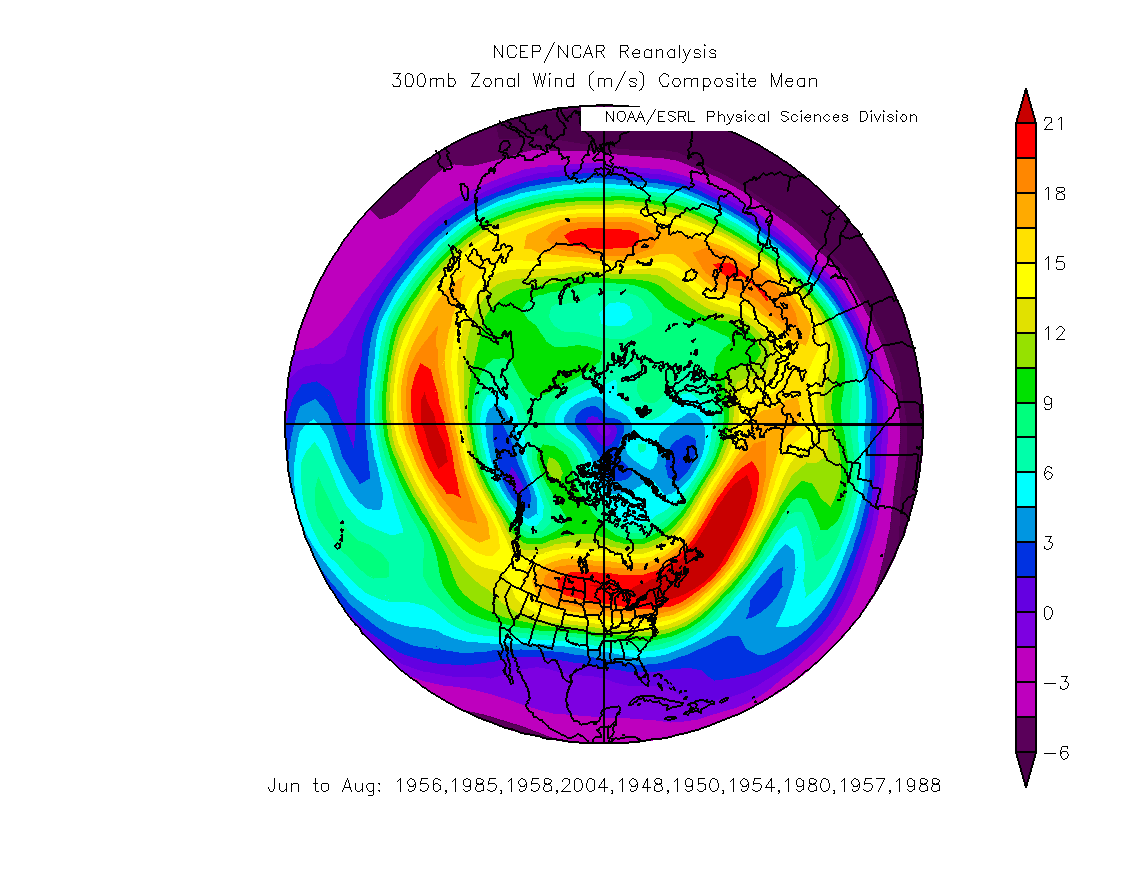 Here a strong Atlantic jet is seen to be aimed for Britany in France. Compare this with the 300mb zonal wind for the wettest years that fall after 2007, shown below. 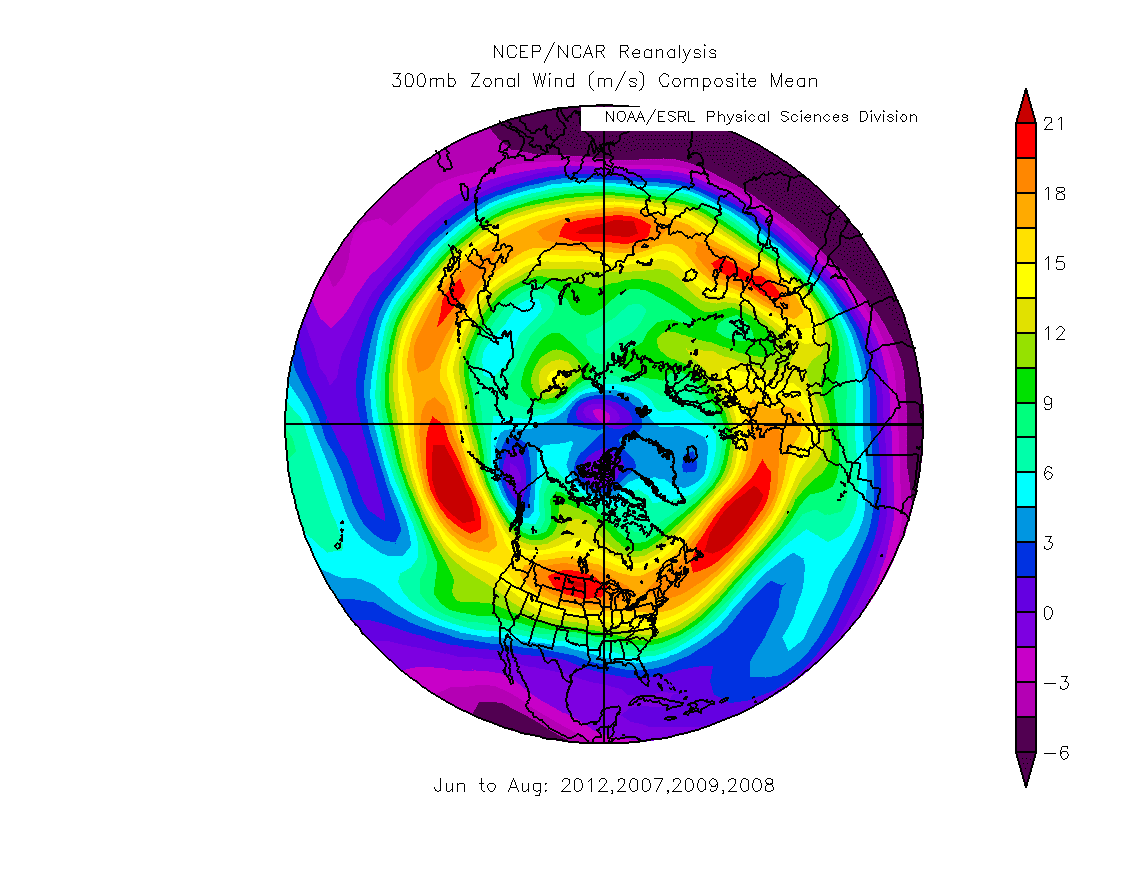 Here the jet is again aimed towards Britany, but look at the jet as it passes Greenland and Iceland, post 2007 it appears to be steered further south, and is weaker.

However in the wettest years before 2007 there is more detail that may help to bring out similarities with the post 2007 period. The wettest years with more than 20% of average rainfall, with total summer rainfall (mm) and the respective percentages, are listed below.

Here I'm going to 'zoom in' to Europe and look at the Jet position.

Pre-2007 Early's summer average jet is aimed at Britany (France), then detours over the Mediterranean and exits across Turkey, this was a dominant pattern in the wet summers during the 1950s. The accompanying SLP pattern is shown here. 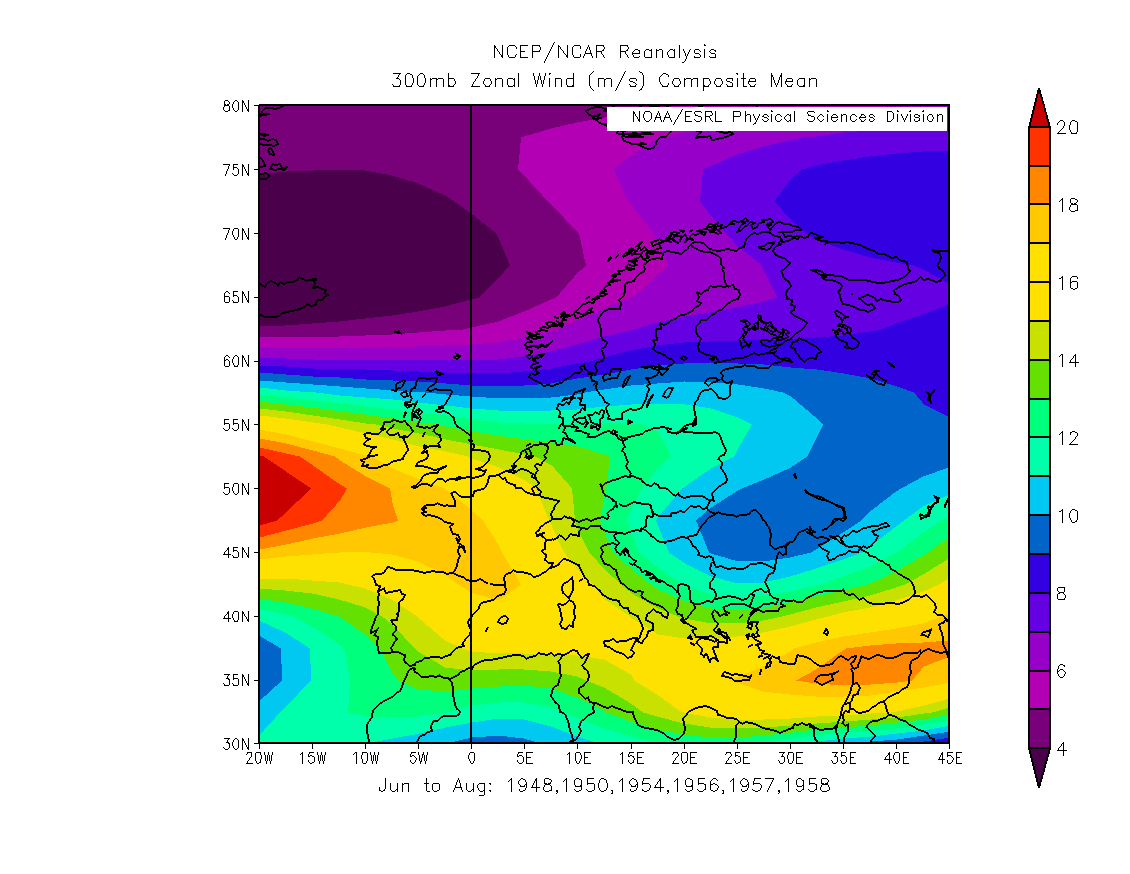 Pre 2007 Late's 300mb zonal flow shows that the jet follows a very similar one to that which dominated several decades earlier in the 1950s. 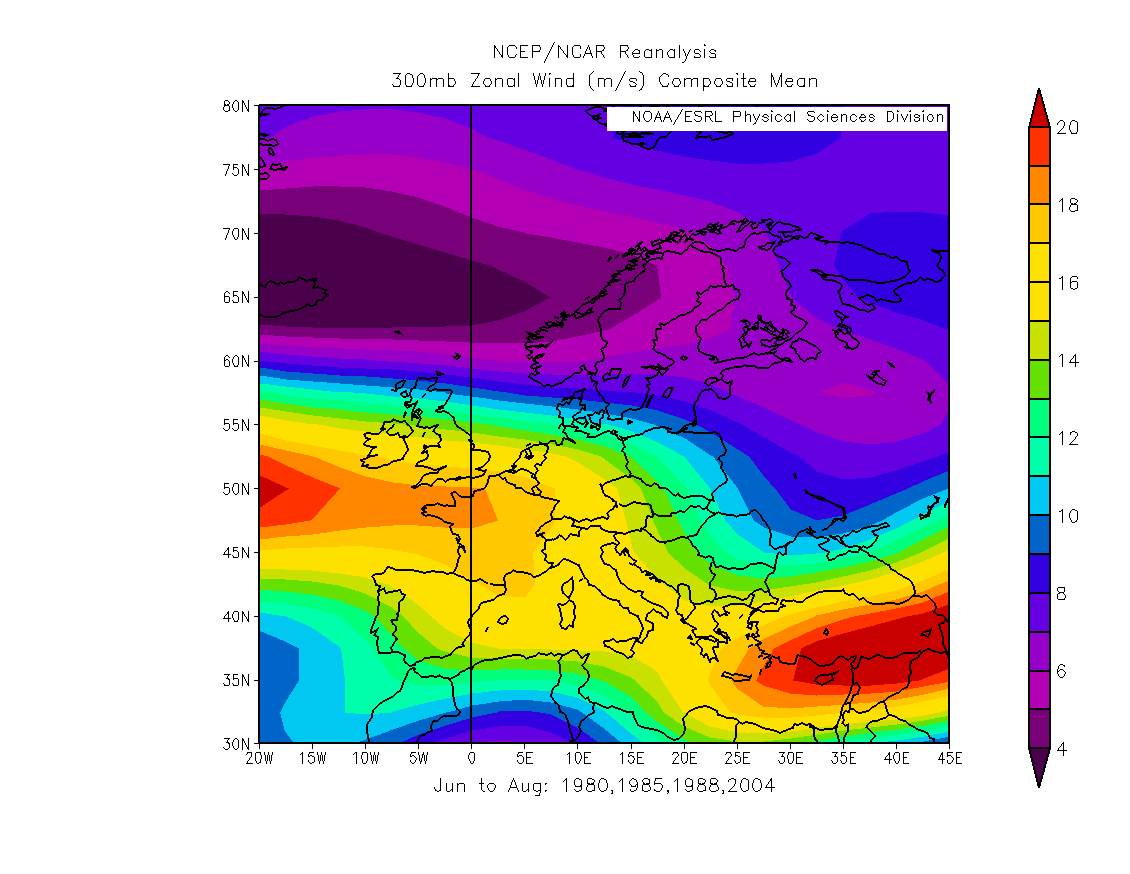 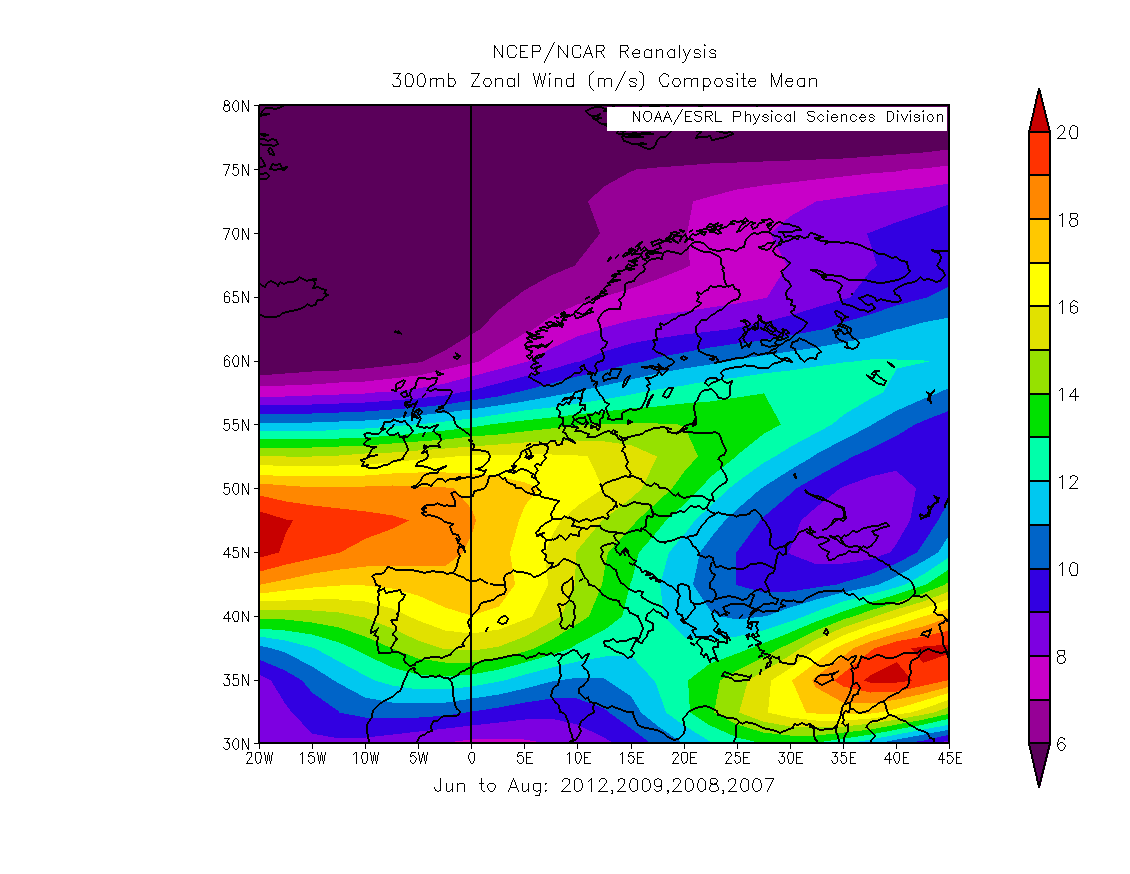 In the case of Pre-2007 Early and Late the patterns are nearly identical, despite the decades separating them that suggests similarity of process behind the two periods. While in the post 2007 years the pattern is different, with a break in the average 300mb zonal flow until it restarts over Turkey, and crucially, look at the angles of trajectory as the jet enters frame on the left of the plots. In both of the pre 2007 cases it follows a southward sloping trajectory, in the post 2007 years it is parallel to the 50 parallel. It should be noted that the SLP fields for Pre-2007 Early and Pre-2007 Late are markedly different, but there is a large scale similarity - both have low pressure at mid latitudes, high pressure at high. That differs from post 2007 when the high pressure is the dominating Greenland high, image.

That noted it does look to me like the behaviour of the jet pre 2007 in the years with UK rainfall above 20% of normal is behaving differently from the post 2007 years.

Finally it's worth comparing the patterns of SLP for the northern hemisphere for the Pre-2007 Early and Late sets of years, and post 2007. 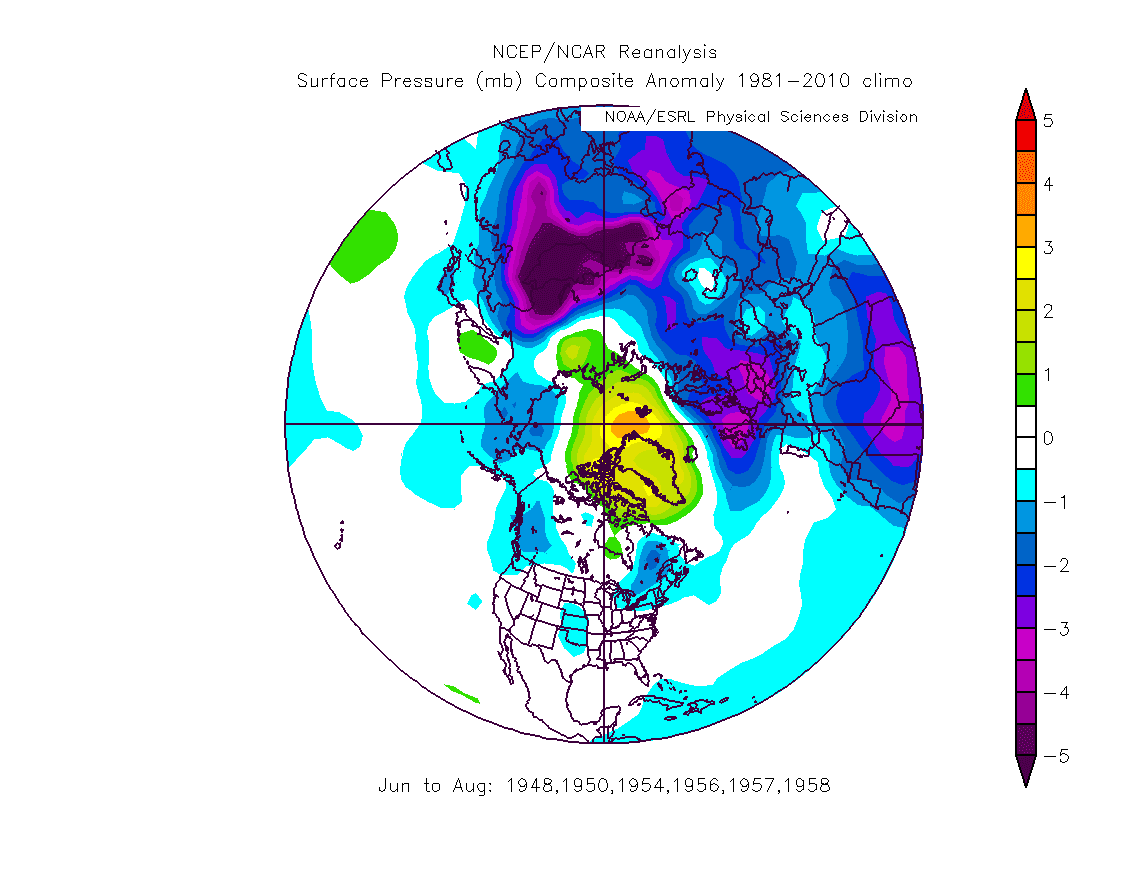 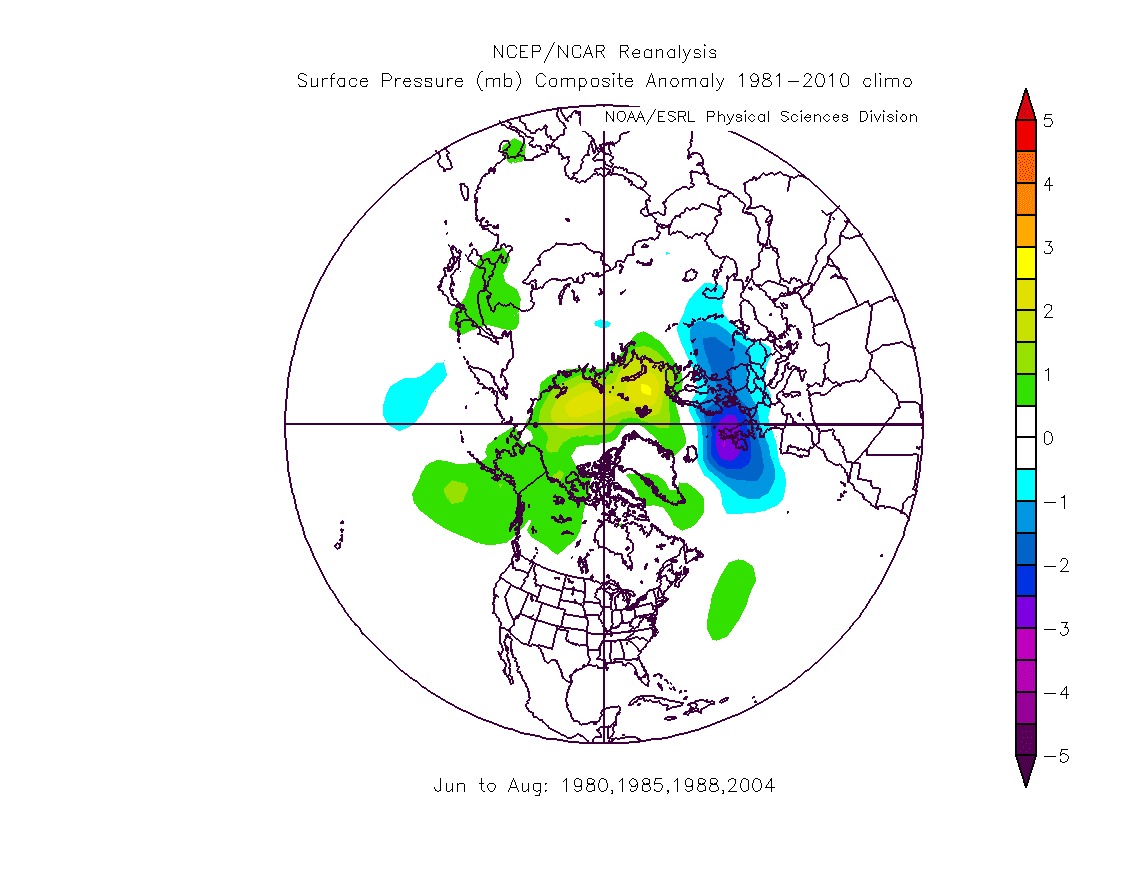 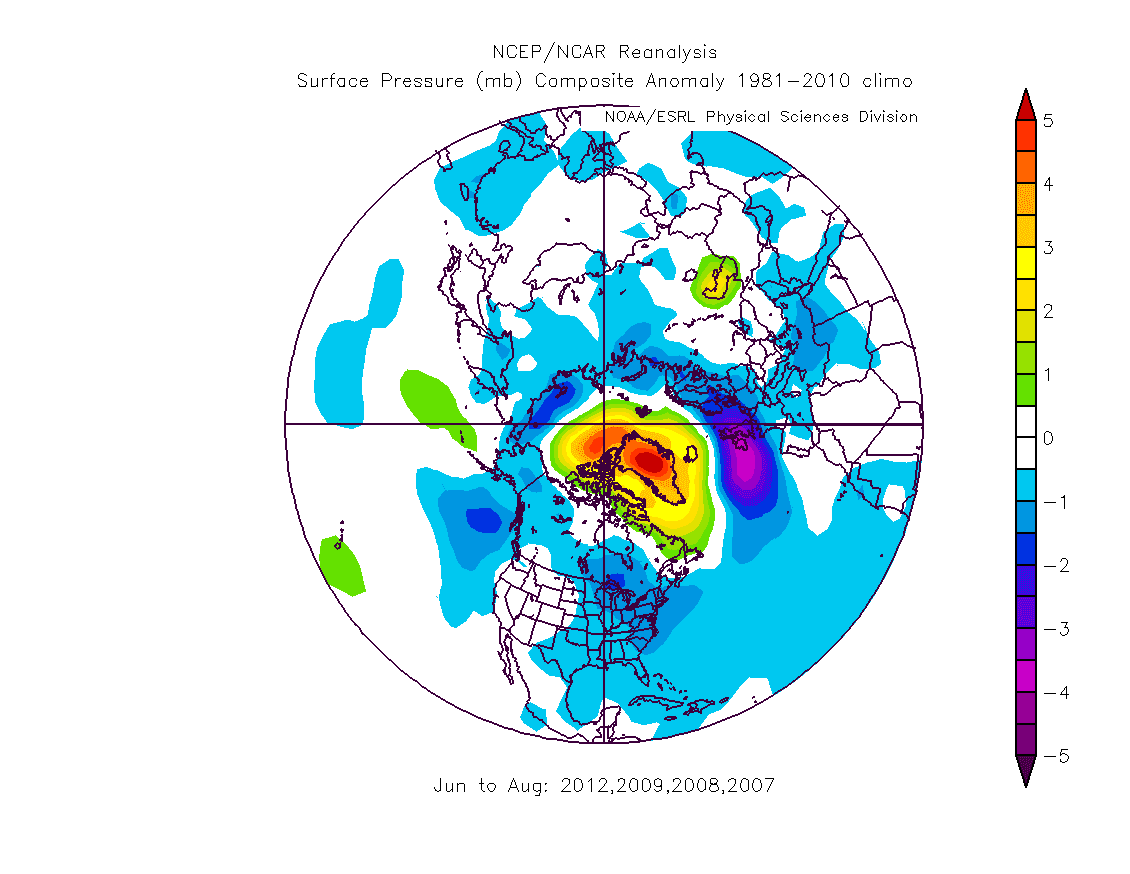 And the moral of the story is, just because there have been very wet years in the past, it doesn't mean the same process was at work then as is at work now.
Posted by Chris Reynolds at 13:09

Regarding the 300mb zonal winds, I'm not sure it's correct to say:"While in the post 2007 years the pattern is different, with a break in the average 300mb zonal flow until it restarts over Turkey..."

Hi Chris, this should probably go under one of the Francis/Barnes posts, but there may be a connection.

This was posted by Steve Bloom at Stoat recently. Just in case you haven't seen it before I thought you may find it interesting/useful:

I'm not sure I'm able to tie this stuff together, but it's useful to see others try, as we're not yet at the level where it will make it into text books. ;)

Thanks, I'd not spotted that, it does look like while the overall pattern is similar the anomalous Greenland high is steering the jet post 2007. The Greenland ridge does seem to be the key to this.

However the rise to 250mb is still a difference between the post 2007 period and the earlier periods.

Thanks for that, someone else has posted it elsewhere, I've yet to read it properly.