PIOMAS Main Series data is now out, I use that term to differentiate from the gridded dataset I also use on this blog. In view of this (as you'll see) and the Cryosphere Today (CT) Area index I can't help but wonder if this year will not even match 2012's record, let alone give a new record. As Neven has recently noted this year has been a slow start, link. Is it going to be delayed enough to scupper any chance of a new record in CT Area minimum this year? 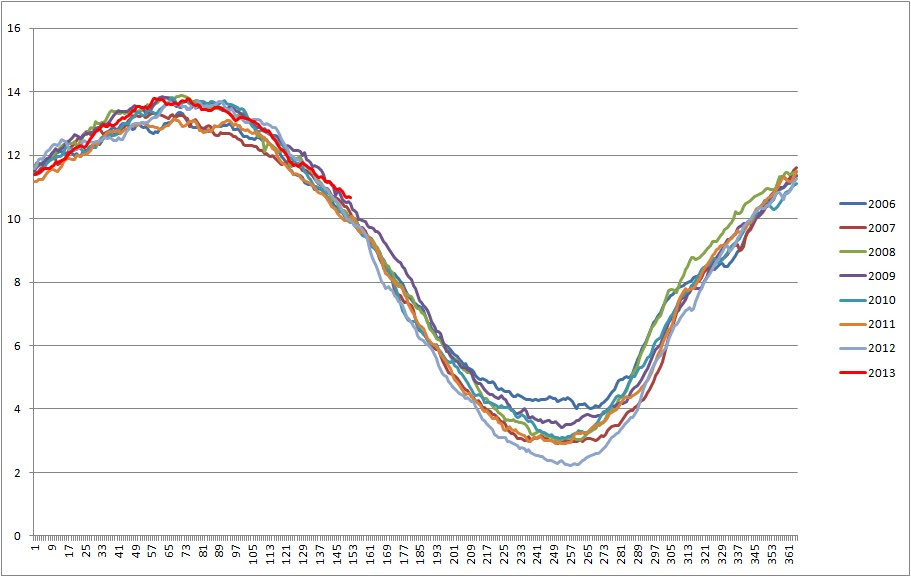 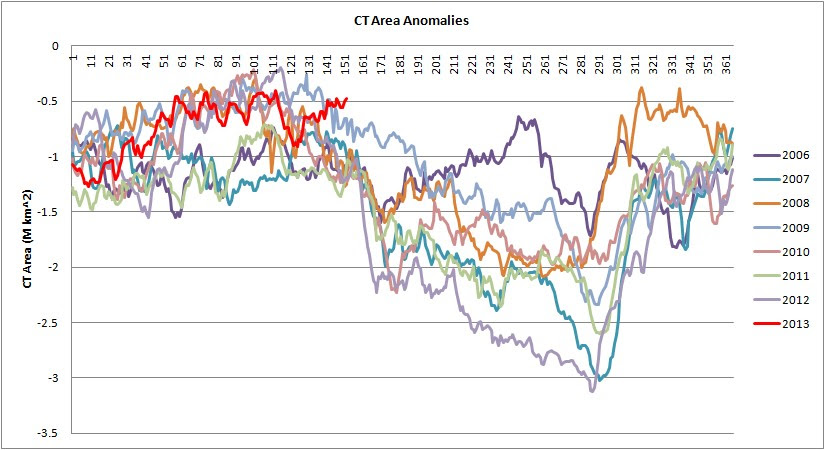 This late start is particularly significant because as I discussed recently after the first week of June 2007, 2011 and 2012, all record or near record minima years, there is normally a crash in anomalies, which some are calling the June Cliff. Looking more closely shows the disparity with the years listed above, we are some 500,000 km^2 above area levels at the typical start of the June Area Crash. However as can be seen, with the right conditions even such a large anomaly can be lost very rapidly. 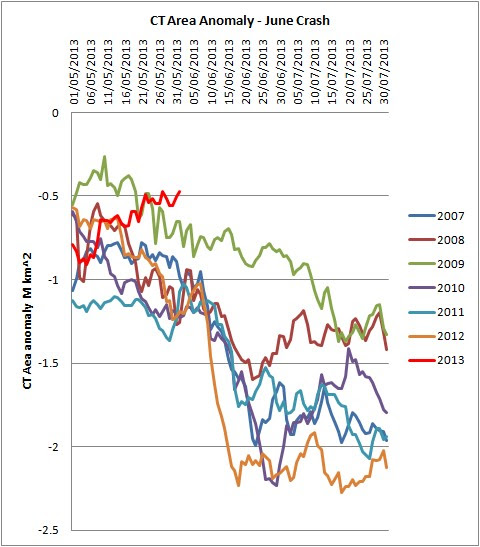 This retarding of the melt season, atypical of recent years, is also apparent in the newly released PIOMAS data. Here is the PIOMAS data with the seasonal cycle. 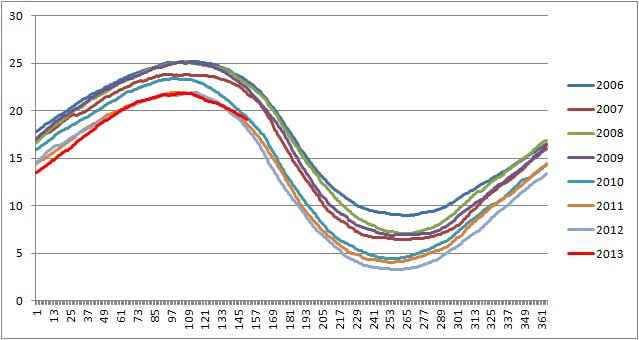 2013 is still definitely within the cluster of post 2010 years, but its angle of entry into the melt season proper is very shallow. Again this is reflected in the anomalies. 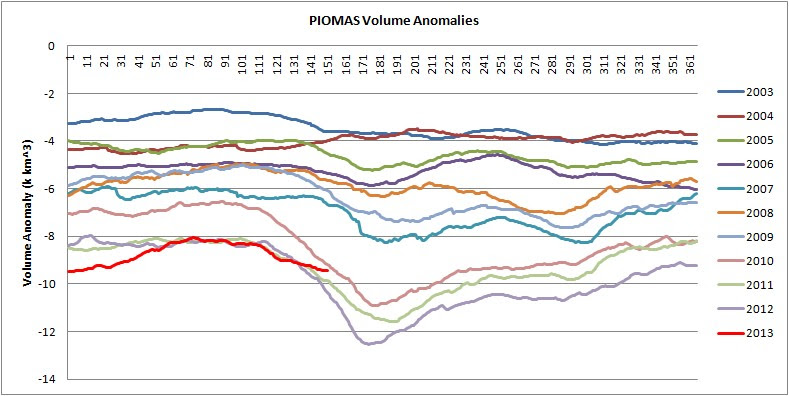 Where the drop seen in other post 2010 years has so far failed to develop in 2013, indeed thus far 2013 is behaving more like a pre-2010 year than a post-2010 year, lacking an aggressive spring melt. This early loss of volume, caused by an early onset of melt is a crucial part in making the record volumes of the post 2010 years. If 2013 sees a large drop in volume through June, but the same profile of less volume loss (increase in anomalies) after the solstice then a new volume record in 2013 will not be possible. I continue to argue that volume is driving the changes in area/extent, so without a new record in volume it follows that I should not expect a new record in area or extent.

As implied by the above two graphs May 2013 has seen a far lower rate of volume loss than either 2011 or 2012, this can be appreciated by looking at the day to day differences in volume. Where 2013, in green, shows a far less aggressive May melt. 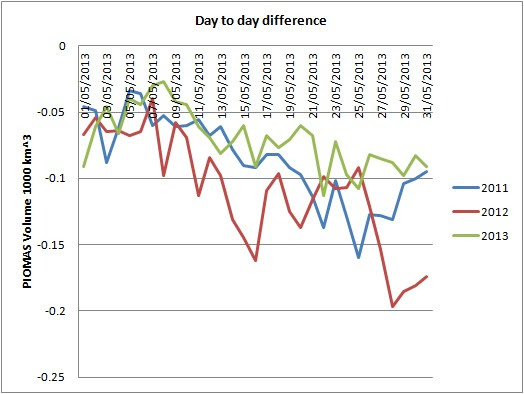 What is also apparent from the above graph is that in 2013 after 21/5/13 there has been an increase in volume loss. At the time of the August storm of 2012 there was also a drop in volume associated with a four day increase in volume loss. However key to attributing this to the May storm is where this volume loss was happening, and we don't have that sort of data on a daily basis. At present I remain of the opinion that most of the loss of thickness and concentration seen in HYCOM is from divergence not actual melt (loss of volume), link.

So what is the cause of this late start of melt? NCEP/NCAR shows how cold it has been over the ice pack. First here's a time series of temperature north of 70degN. 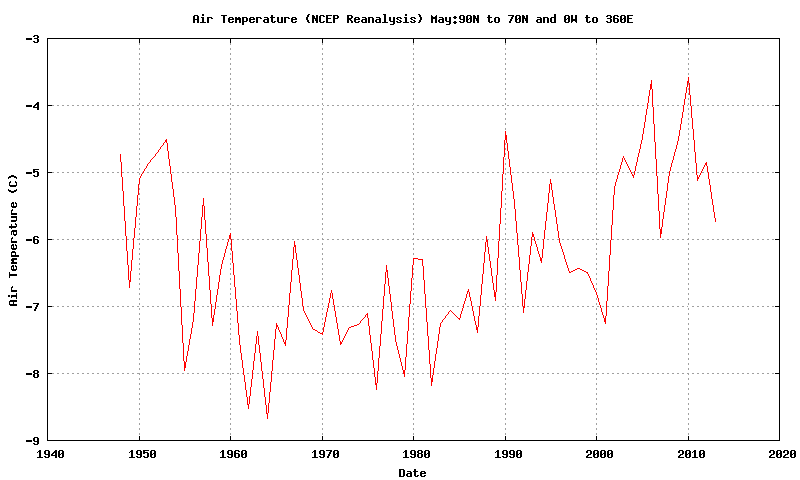 This shows only a slight cooling of less than 1degC, but this regional average is losing crucial detail which becomes apparent in the composite map plot for May 2013 minus May 2012 temperatures. 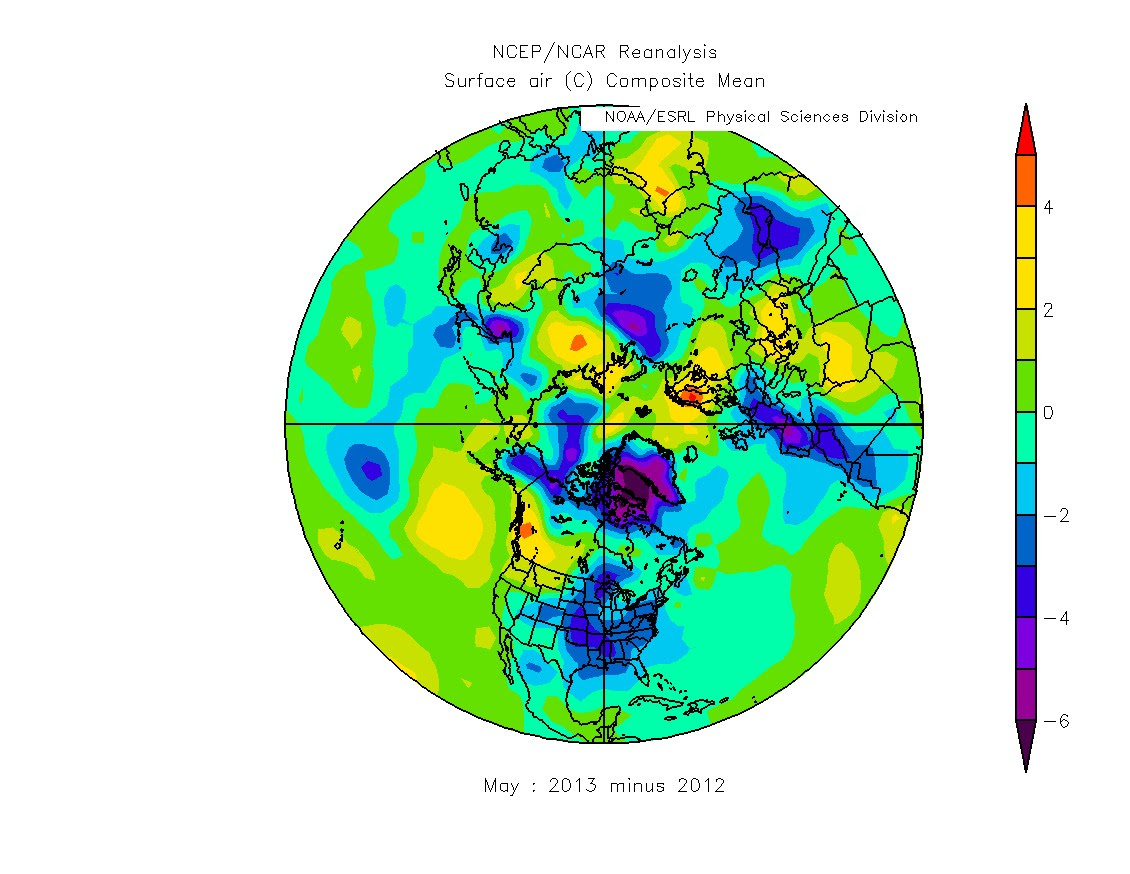 This shows that the cooling is more intense over the Central Arctic and across much of the Eastern Arctic. Which is in contrast to the more balanced pattern for February to May. 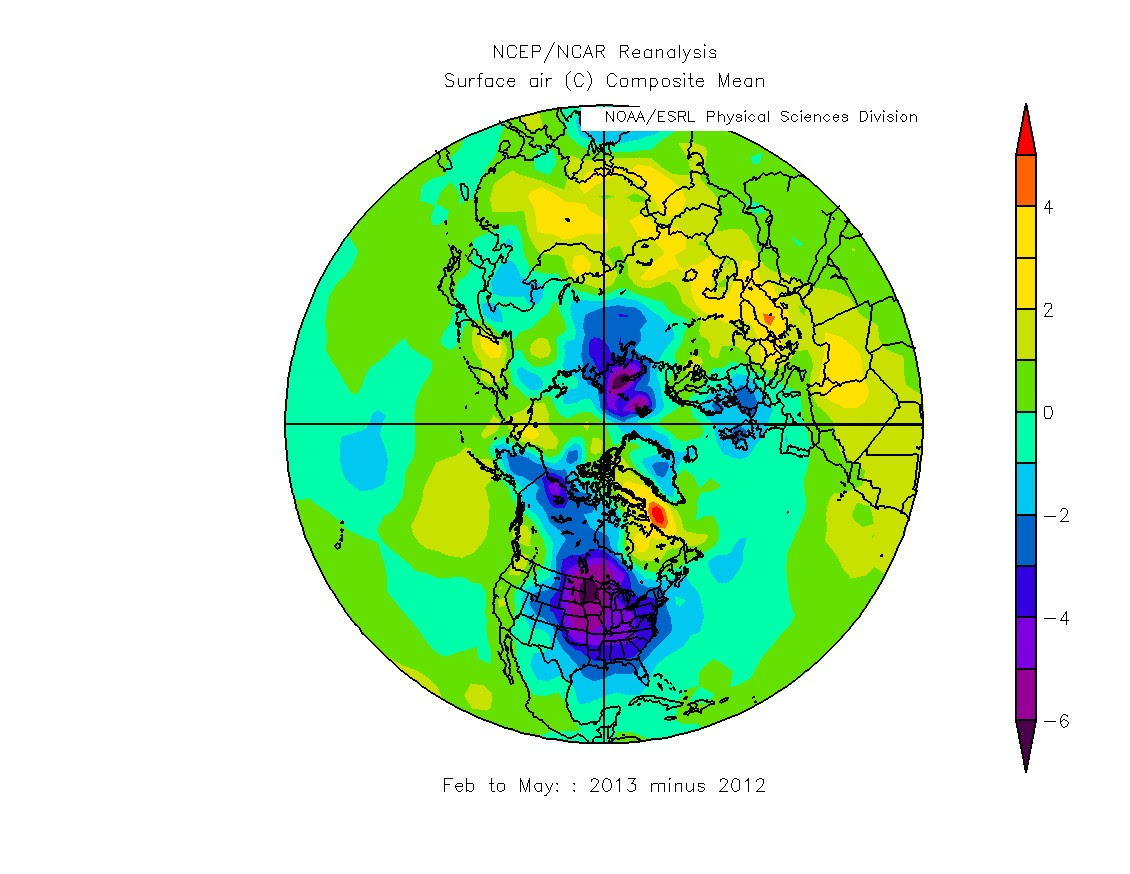 Temperatures seem to be some 3degC cooler than in 2012, which during the period at which temperatures normally begin to skirt zero degree Celsius, becomes very significant. However the pattern for February to March is more balanced and does not suggest unusual amounts of thickening since March conditions, link. This is reflected in the PIOMAS thickness series, link, which suggests that the delayed onset of melt is not due to thickness of ice, but is due to weather.

So the conditions I had been expecting to produce a rapid onset of melt are not in question because an external factor, colder temperatures, seem to be causing the delayed onset of melt. This is bad news for me because I was hoping this year would be a clean cut test of my ideas. However despite all of these indications I still think it's too early to totally write off the prospects for a new record in 2013.

The graph below shows the correlation between (difference de-trended) CT Area in ten day intervals and day 250, in September ('axis title' should read 'correlation'). 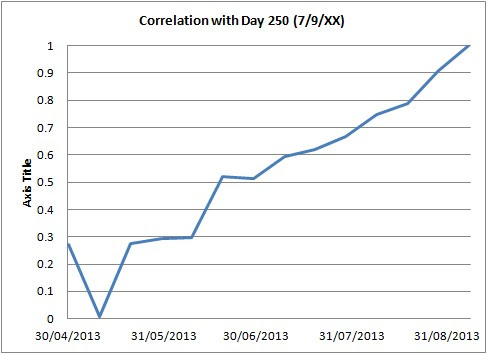 It is in the final week of June that correlation jumps to statistically significant levels (~0.3) and then increases towards one. This increase is to be expected, the nearer one gets to day 250 the better predictor current ice extent becomes. My reason for showing this is simply to point out that drawing conclusions at present with regards the minimum is not sound in the context of past behaviour of the sea ice.

Furthermore looking at the PIOMAS seasonal cycle of inter-month differences is useful. This is using the differences between monthly averages to get a picture of volume change per month. As an aside; if you look at the individual plots within months you can see noteworthy details. Such as 2013 being the greatest growth in February and March since 2007, The post 2007 years having greater November and December volume gains than the 1980 to 1999 average. And most pertinent to the present, the substantial increase in June losses. 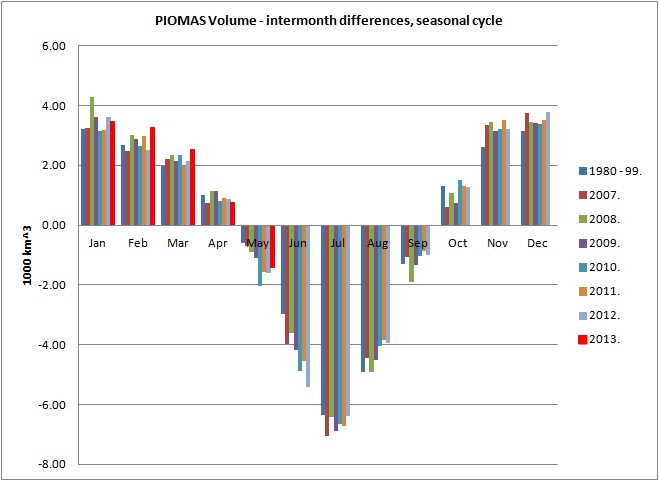 My purpose in showing this is to put into context the losses in May, with June, July and August.

The recent impacts of the May storm as described in my previous post, should alone be a caution against writing off 2013 as an uneventful year. We have yet to see what impact this event has upon the melt season, it may well be significant. And as Neven has recently been good enough to let me know, peripheral areas of the Arctic Ocean are now showing a blueish tint in MODIS, suggesting that, albeit delayed, melt ponds are about to come into the mix. GFS temperatures are finally hitting zero across the ice pack, WetterZentrale.

Really it is too early to conclude that the game is over and that there is no chance of a new record this year. 2013 has started late, given the mid to late summer increase in PIOMAS volume anomalies of 2010 to 2012 it may indeed be the case that this late start has already set the melt so far back that a new record is unlikely. But I'm leaving it until I have June's volume data, and the state of the ice observed in the first two weeks of July before I consider changing my opinion on 2013 seeing a new record.

The Excel Spreadsheet containing the base data is now updated and is available here.
Posted by Chris Reynolds at 13:54

Email ThisBlogThis!Share to TwitterShare to FacebookShare to Pinterest
Labels: Arctic 2013

This is a fantastic post. I've been reading your blog for a bit, but now I understand why Neven speaks so highly of your assessments.

For my part, I agree that it's too early to call. But another slow melt come end June would likely be too much to make up.

Thanks both, it's all in the material, if the ice provides something to say it makes a good post.