CO2's role in the end of the Last Glacial

A recent paper by Shakun et al may throw new light upon the role of CO2 in the past glacial and interglacial periods. What does it mean, and does it change the situation we face with regards the current era of anthropogenic global warming, driven in large part by human emissions of CO2?

In 2006 Gerard Roe published a paper entitled "In defence of Milankovitch". In it he uses a shift of viewpoint to bolster the theory of Milan Mulankovitch, that changes in the Earth's orbit and it's relationship to the Sun caused the swings between glacials and interglacials hat have dominated the Earth for the last million years. This paper seems to have been a direct response to papers such as Carl Wunsch's "Quantitative estimate of the Milankovitch-forced contribution to observedQuaternary climate change." In that paper Wunsch notes that there are four distinct variants of the Milankovitch theory:

2. Obliquity and precessional band energy is discernible in spectra of climate proxies.

Wunsch examined various data using mathematical techniques, particularly the fourier transform, and showed that only 20% of the variability of the ice ages could be explained by the Milankovitch Cycles.


Most of the records however, show that the 100 ka energy is indistinguishable from a broadband stochastic process. The most straight forward hypothesis is that it too, is a form of random walk, whether involving some type of largescale instability of the climate system under full glacial conditions...

Stochastic processes being 'random' processes. Roe cut through this matter. The linchpin of the action of the Milankovitch Cycles is insolation (sunlight) in the Northern Hemisphere. Basically insolation can be increased and decreased by aspects of the Earth's orbit and rotation, this has most effect in the north because of the land masses surrounding the Arctic. Land warms more readily than the ocean, and around Antarctica in the South there was sea-ice and oceans, whereas in the north land formed a bed for extensive glaciers. What Roe showed was that if one compares the insolation changes with the ice sheet extent the correlation is poor, which fitted in with Wunsch's arguments. 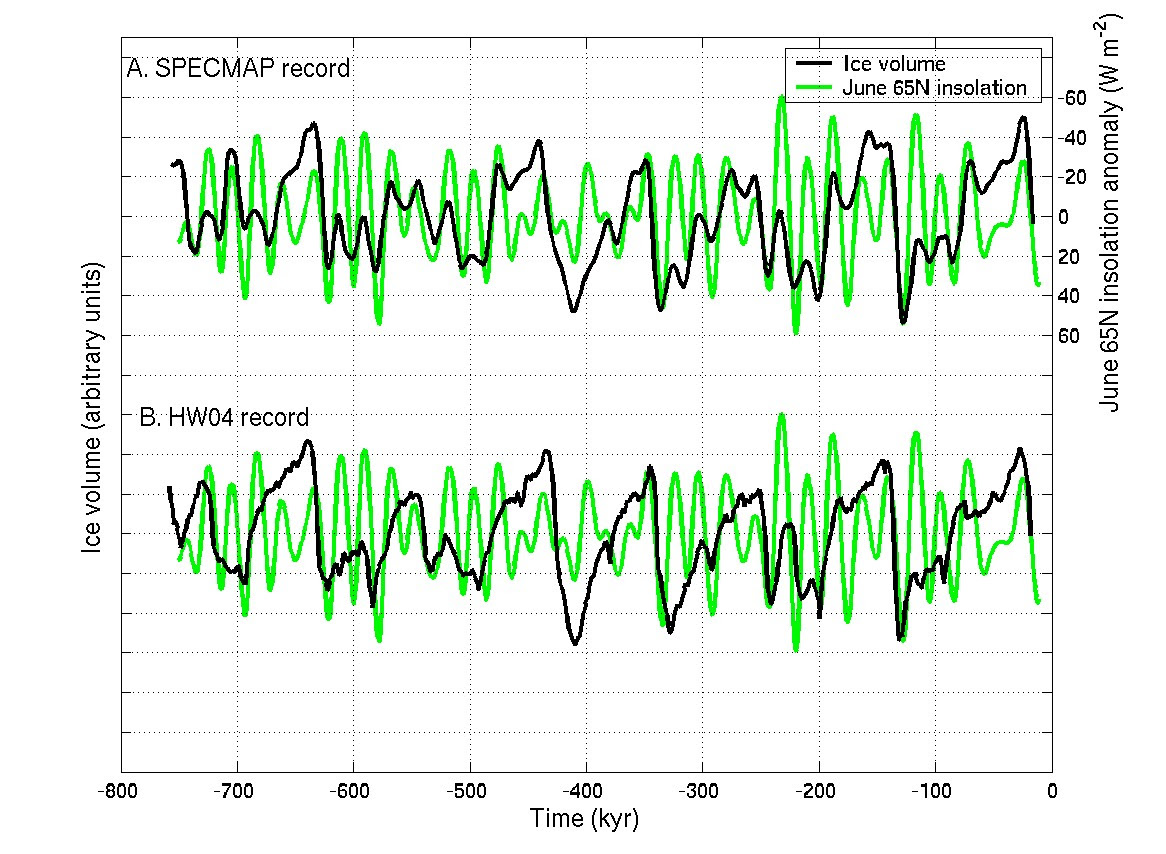 Figure 1 of Roe, In Defence of Milankovitch.

However Roe went on to show that if one takes the rate of change of ice sheet extent then the correlation with insolation is far improved. 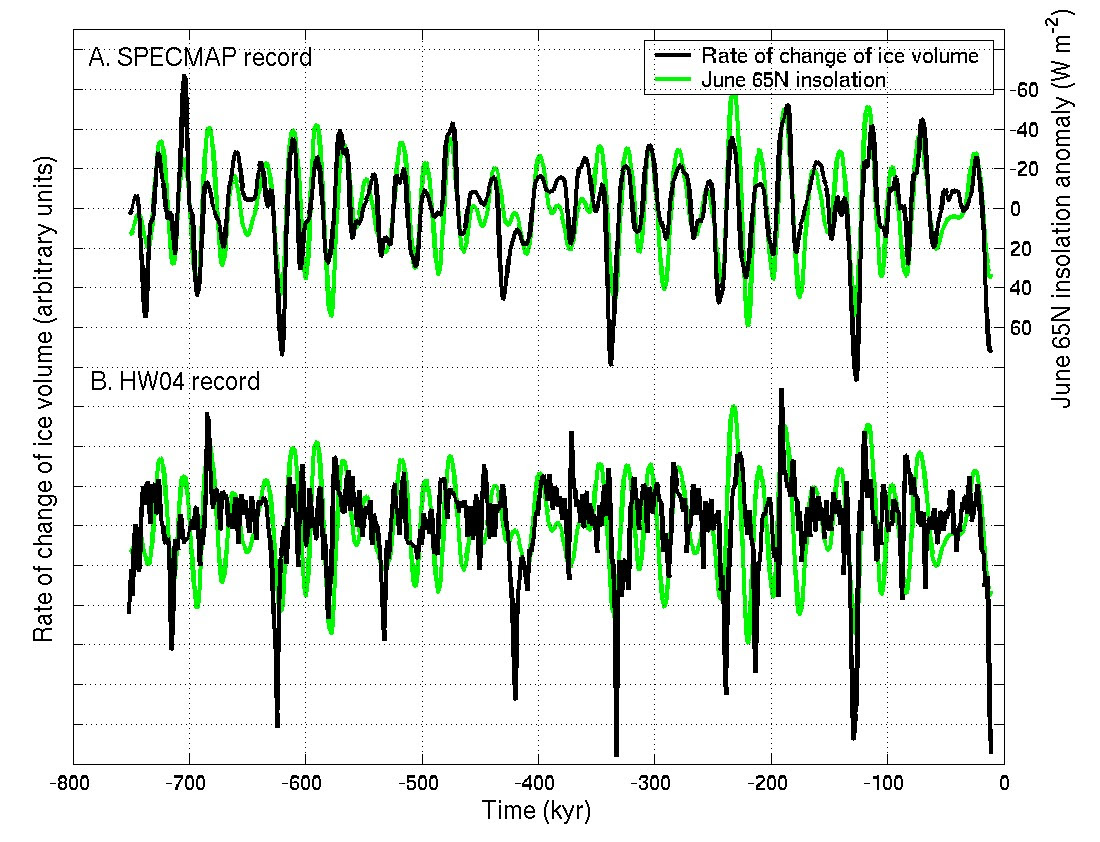 Figure 2 of Roe, In Defence of Milankovitch.

So it seemed that by changes in ice sheet extent the Milankovitch Cycles were driving the ice ages. With regards CO2 Roe noted that aspects of the available evidence suggested that "CO2 variations play a relatively weak role in driving changes in global ice volume compared to insolation variations." But that; "This certainly does not rule out CO2 as a primary cause of tropical or other climate variations, or of the apparent synchronisation of the ice-age signal between hemispheres."

In a series of papers Hansen refined a simple model of radiative forcing during the ice ages. This culminated in his 2010 paper with Makiko Sato "Paleoclimate Implications for Human-Made Climate Change."

The simple model shown above used sea level change as a proxy for ice sheet change, the ice sheets being basically a land store for water from the oceans. The ice sheet changes having a substantial impact on sunlight reflected back into space, the larger the ice sheets the more sunlight is reflected back to space and the more the cooling of the planet. The model added to this the radiative forcing from well mixed greenhouse gasses to provide a good match with estimated deep ocean temperature. So regardless of the recent paper by Shakun et al, we know CO2 had a role in the ice ages.

Shakun et al re-examine the issue of the pacing between temperature rise and CO2 using the rise out of the preceding glacial. I've previously accepted that CO2 lagged temperature at face value, so have seen CO2 as a feedback, as opposed to its current role as a forcing. By this I mean that during the ice ages atmospheric CO2 changes were driven by temperature, whereas now our emissions (not a temperature dependent process) are driving temperature. However Shakun et al point out that the proxy derived temperatures of Antarctic ice cores represent local, not global, temperature. And that using a wider array of geographically dispersed proxies throughout the world, Antarctic temperatures lead the global temperature. So what was a lag of CO2 behind temperature using only Antarctic data becomes a lead; CO2 changed before temperature. 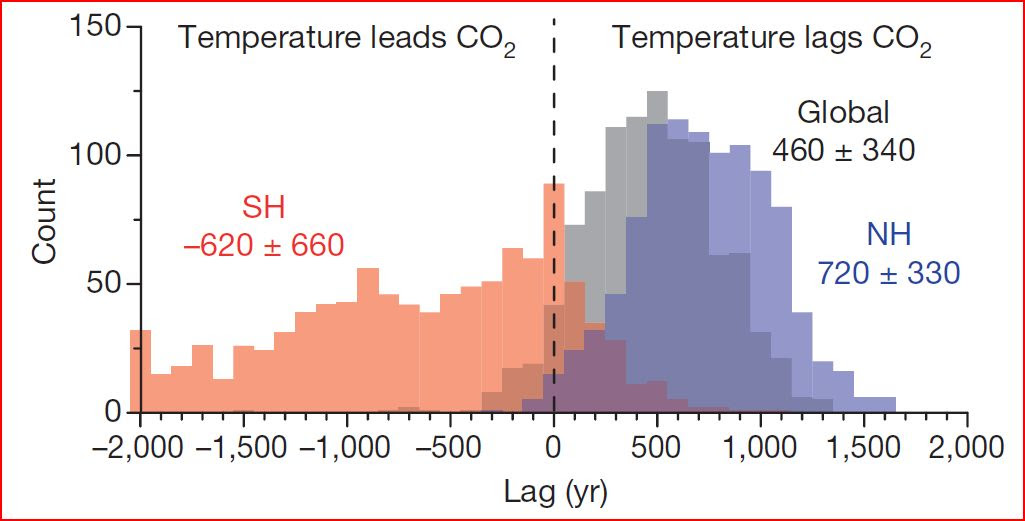 Crucially Shakun et al note that the initial temperature rise does precede CO2, so CO2 was clearly not the cause of the warming out of the last glacial, but we knew that already from Roe's earlier paper. Shakun et al find that the initial warming happened in two stages: The first stage was gradual with a warming of northern mid to high latitudes. The second was more marked and occured during a warming of the Southern Hemisphere, and cooling of the Northern Hemisphere. I had previously thought that the CO2 mainly came from the Southern Ocean, as a result of its warming, with the lag being due to the time taken for the ocean to warm. Now it seems there was a more active role for the Northern Hemisphere, the paper doesn't say how CO2 emissions lead temperature.

However CO2 probably had a more active role in the global warming out of the last ice age than previously thought, and with regards the role of ice sheets; the authors note that at certain times such as the Oldest Dryas, Younger Dryas and the early Holocene, temperatures rose despite ice sheets not changing significantly. This supports a more localised temperature impact for ice sheets, as models show, an impact that would not emerge in this study as the proxies don't cover the regions of the ice sheets. So it does not impact Hansen's work, as that was using deep ocean temperature as a proxy for global temperature, on the basis that the deep oceans are an integrator of global temperature changes. And Hansen's calculation of global temperature still works even if ice-sheet cooling is localised.

The paper is also worth reading on the basis of its comments about the meridional overturning circulation (aka the THC) and its role in hemispheric temperature distances. But as there's a paywall free copy at the end of this post, it seems pointless to re-write the whole paper.

So this paper doesn't change anything with respect to our current predicament. However it throws fresh light on a fascinating aspect of natural climate change in recent geological history.

Roe, 2006, "In defence of Milankovitch." http://earthweb.ess.washington.edu/roe/GerardWeb/Publications_files/Roe_Milankovitch_GRL06.pdf

I have had a quick look at this paper but only in the light of the nonsense Goddard has posted about it. Clearly he doesn't want to get to grips with the new perspective this p[aper gives.

I don't have access to the full paper, (even if I could understand it), but what I can't figure out is does it explain the 800 year lag in the Antarctic from warming to CO2 showing up in the ice? Is it just the case that it took that long (seems unlikely) for CO2 concentrations to be detected?

There is a free copy in the references. I could be underestimating how much I know, but I think most people with a working knowledge of climate could read it and get it.

Basically Antarctic temperature rose ahead of Northern Hemisphere and Global temperatures. That's the answer to your question. There is also evidence of episodes of see-saw type behaviour, from other papers too. By this I mean that when Antarctica cools the NH warms and vice versa. These incidents seem related to the THC.

They note that their proxy data under-represents the impact of ice sheets in the NH, but as they note, other research shows that the effect of ice sheets is mainly localised. So (my understanding) the lead of CO2 over temperature could be tempered a bit if NH ice sheets were to be included. Roe's work suggests a connection between ice sheet rate of change and Milankovitch driven insolation changes.

However all things considered this paper pretty strongly makes the case that on a global basis CO2 changes were at least coincident with, probably leading, temperature change. Which means CO2 had a more active role in the deglaciation than I previously thought. And if it did during that period it's hard to see why it wouldn't during previous glaciactions and deglaciations.

Goddard is a cupid stunt. I think you sum up his reaction very nicely in your post.

The denialist lice have really got in a lather over this paper, but from what I've seen so far they have nothing of worth to say.

Thanks for the link, I have used it in a further post. SKS has also done a good job of listing the series of events so even an idiot like myself can get to grips with.

Thanks for tackling the 'skeptical' comments that have recently popped up on my blog too - appreciated.

No problem, if you're ever having problems with denialists just ask. Although I'm not going to follow your path and devote a lot of time to them. I find them boring and irrelevant.

I know what you mean but the advantage for me is that I'm really not very bright - I know this because Goddard and his minions tell me all the time in rather more colourful words - but at least I remain intellectually superior to them :-D

I'm constantly struck by how slow I am, I'm reading a paper at the moment, been at it for two days, and I still have the nagging conviction I'm missing something...

The major thing that I hate about denialist jerks like Goddard is that they're not even interested in trying to understand. That and when I go looking for something in Google only to be faced with mountains of crap from Watts, D'Aleo, Tisdale, No Tricks etc etc etc.