Cold Winters: From Theory into Practice?

As reported by BBC News this Winter has seen a period of very cold weather over a large swathe of Europe. I didn't blog about this at the time because I was tied up with the issue of methane emissions from the Arctic. However in view of my previous string of posts on cold winters, and the research of Dr Judah Cohen, especially as Dr Cohen's Snow Advance Index didn't predict a cold winter, this recent event needs addressing. Firstly I should stress that this Winter as a whole over Northern Europe hasn't been cold, nor has the continental US, image. Certainly the pattern associated with winters like 2009/10 has not been apparent, which I take as confirmation of Dr Cohen's forecast for this Winter.

There's another reason for this post. Over at Neven's Sea-Ice Blog, Neven said he'd understood the cold event to have been due to easterly winds, he's correct. But that was due to the position of the dominating high pressure system, with Europe on the south of that system winds there were easterly, however from my reading of the event there was also a significant cold outbreak from the Arctic. That being a point Dr Cohen mentioned to me in an email around the time of the event.


So what of the recent cold outbreak in Europe?

In 2010 Rasmus Benestad over at RealClimate posted an article discussing cold winters and research by Vladimir Petoukhov and Vladimir Semenov. In their modelling study(PDF) they found that reduction in sea-ice extent in the Barents and Kara sea causes a high pressure system in the atmosphere that drives cold air south, causing Winter cold periods in Europe. This situation is neatly summed up in the following graphic from RealClimate. 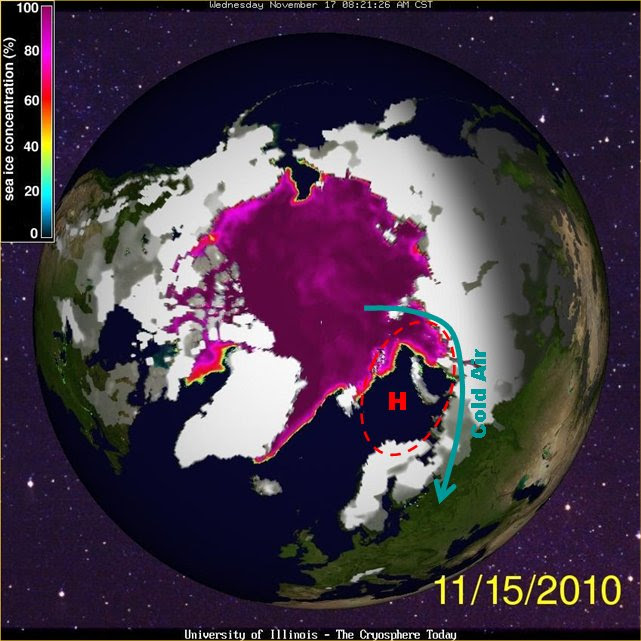 So what's been happening this year?

The Kara Sea has had unusually low sea ice. 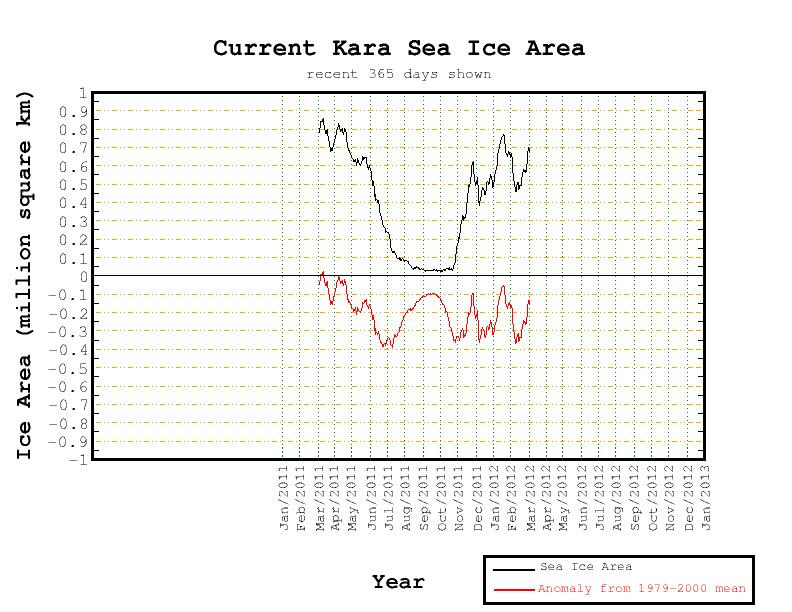 The Barents Sea has had unusually low sea ice. 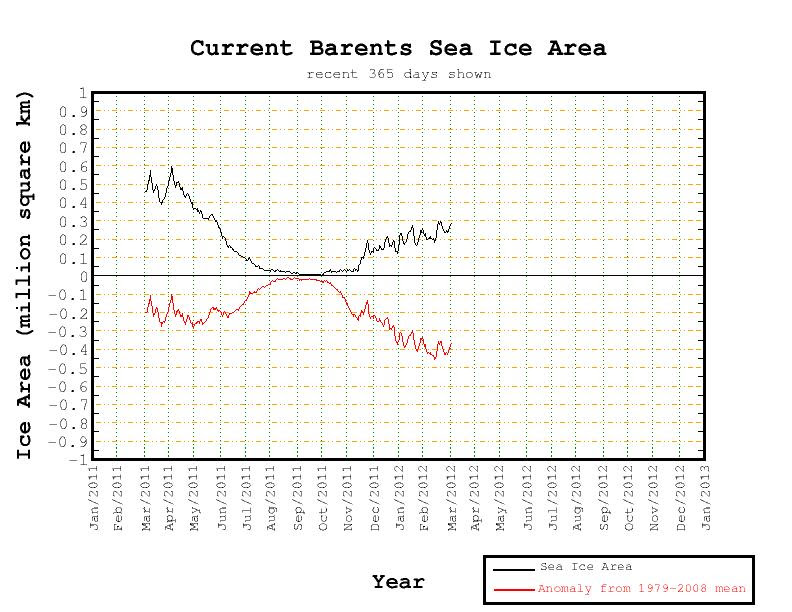 I've previously calculated that Barents and Kara are down to about 75% of their 1979-2000 mean area. From the above graphics my ballpark estimates are Kara -70% Barents about 40%, which makes about 50% for both combined.

Looking at the period 31/1/12 to 7/2/12, there was a high pressure system centred on the coast of the Barents Sea, this had been developing throughout January.

This was substantially different from the climatology for the same period.

High pressure systems in the northern hemisphere cause air around them to rotate in a clockwise manner, so this high pressure was causing air to be drawn out of the Arctic, across the cold of northern central Eurasia and towards Europe. This can be seen by the meridional wind component.

And this synoptic scale pressure/wind situation resulted in cold temperatures across Europe.

Note the agreement between the area of purple cold anomaly and the purple northerly (from the north) and easterly (from the east) winds in the preceding two plots.

Why was there a warm anomaly from the Arctic ocean over to central Siberia? This was associated with the drawing in of Atlantic air to the north of the high pressure system, the area of warmth does however get larger as it progresses east, that's because these are anomalies, so despite the cooling of the air as it progressed eastward it was still relatively warm enough to present a substantial deviation from the average temperature over that area.

My working assumption is that this cold snap was probably due to the low sea-ice in Barents/Kara. So even in a winter when the Snow Advance Index does not indicate a severe winter, cold snaps can be caused by just weather, or by linkages to the reduction of sea-ice. In terms of the loss of Arctic sea-ice we are now firmly in the age of consequences. In the years to come we should see this pattern again.
Posted by Chris Reynolds at 02:35

In the years to come we should see this pattern again.

Yes, this echoes my conclusion. I think we will see more anomalously low sea ice cover in Kara/Barentsz because of heat build-up there during this melting season. So theories put out now will get tested immediately. A very exciting line of research really.