Catch-22, is a logical paradox arising from a situation in which an individual needs something that can only be acquired with an action that will lead him to that very situation he is already in; therefore, the acquisition of this thing becomes logically impossible.

To prompt worldwide concerted action to severely reduce CO2 emissions we need to have such clear evidence of a real and present danger that we are already committed to dangerous climate change. At the stage we have observations of massive climate disruption that is clearly outside of previous natural variability it will be increasingly hard for people to continue to turn a blind-eye to the problem, putting action off until evidence of a disaster is at hand will no longer be an option.

Realclimate have recently posted an important piece by Professor Ray Pierrehumbert on the Athabasca Oil Sands being opened up due to the starting of a pipeline: Keystone XL. The article argues that the opening up of the Athabasca Oil Sands makes avoiding 2degC warming very unlikely. As James Hansen put it with regards avoiding dangerous climate change "If the tar sands are thrown into the mix it is essentially game over [to avert 2degC warming]."

In the comments Prof Pierrehumbert referred to a 2010 GRL paper by Kyle Armour and Gerard Roe this being "Climate commitment in an uncertain world." PDF here. There's also a related set of slides from Gerard Roe on the matter of committed forcing here.

From Gerard Roe's slides there's a useful graphic that shows how relatively well-constrained climate sensitivity actually is. Climate sensitivity is a measure of how much warming you'd get for a change in climate forcing, such as a doubling of CO2. 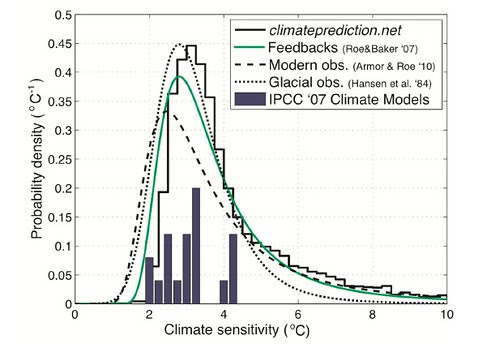 Aerosols are formed by natural and human driven processes, essentially they're droplets of water, however their source determines their nature and this can effect how they act on the climate. Aerosol forcing due to humans is definitely negative because the main action of aerosols on climate is to reflect sunlight back into space, hence cooling the Earth. The following graphic from Gerard Roe's slides shows the climate forcings of various key factors. 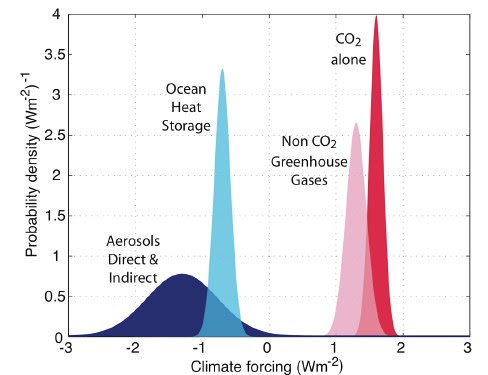 Note how Ocean Heat Storage, CO2 and non-CO2 greenhouse gasses are tall thin bell curves, this is because their values are fairly well defined. However the bell-curve for the direct (reflection of sunlight) and indirect (impact on clouds) effects of aerosols is spread-out because it's not clear what the real value is.

Take the factors in the above graph and add them and you get the overall current climate forcing, the black bell-curve. 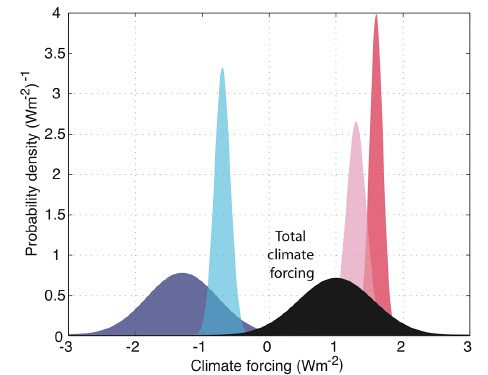 Now what happens if you remove the forcing due to aerosols is that you move the black bell-curve to a more positive position. This reflects the warming that you'd get if those aerosols were to cease. 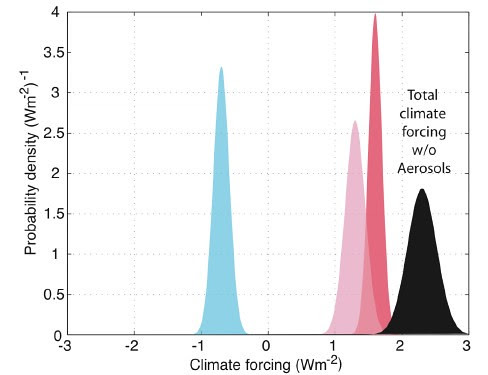 If human burning of fossil fuels were to cease or massively reduce there would not be a cooling, there would be a warming. This is because the CO2 itself is only slowly removed from the atmosphere due to the chemical processes involved. The initial fall would take centuries and would leave a long tail of just under half the peak atmospheric concentration, that long tail would take around 100,000 years to dissipate. However the aerosols would leave the atmosphere within weeks to a couple of years. So upon cessation of fossil fuel burning the full warming of CO2, which is currently hidden by the unknown cooling of aerosols, would be manifest. 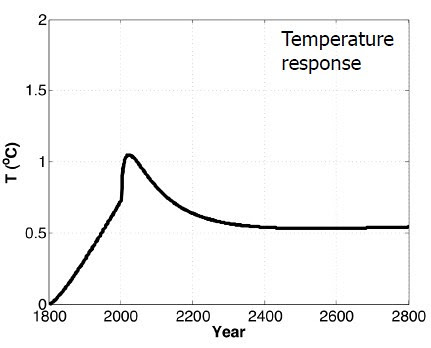 Humanity has a tendency, both on the individual and collective levels, to leave problems until they become serious. Only then are options for action considered and implemented. In the case of climate change this is a foolhardy and dangerous policy. As more of the world becomes industrialised and usage of fossil fuels increases the committed warming the policy of 'wait and see' becomes more and more dangerous.

By the time the majority decide action is needed on climate change it may be too late for action to avert the edge of the precipice.
Posted by Chris Reynolds at 03:30

Chris, nice post. May I repost this in it's entirety over at DailyKos (with links back here and attribution)?

Catch 22, a brilliant and funny book full of black humour that I read many years ago and has left a lasting impression, and where I believe the original phase comes from.

Set in the world of US bomber pilots in WW2, Catch 22, if I recall correctly,was the simple fact that to fly dangerous missions meant you must be mad, but to ask to get out of them because of madness would prove you were sane enough to continue flying them - a no win situation like you describe.

Unfortunately with growing despair I feel that the climate argument is being lost politically, even if it is scientifically sound. You may very well be right that action will only be taken when most damage is unavoidable. A situation I do find black but humourless.

Don't know if you caught it but Panorama's Monday edition will add to the sentiment in the UK against doing anything about AGW. It was claiming that increases in electricity prices are due to measures against AGW. The usual environmental groups and the Grauniad are kicking off about it - the subject doesn't interest me enough to dig around and try to find out. As I've cut my electric use back to the minimum and don't drive the cost of electricity and (particularly petrol) don't concern me too much - my boss has stopped moaning to me about how much it costs him to commute as I just rib him about it. ;)

I find black humour in the situation, particularly in the way that despite the evidence people choose to resort to fantasy and denial to avoid reality, instead of doing something. Humanity reminds me more and more of the Golgafrinchams from 'Hitchhiker's Guide to the Galaxy'.

In the end it's a matter of doing what you can - what the rest of the world does is out of your power. So there's no point in getting too stressed about it.

For myself - when I find things in life get too much I just watch this:
http://www.youtube.com/watch?gl=GB&v=WlBiLNN1NhQ
Bernie, I told them, you'll never make your money back...

Yes I did see Panorama and I'm pretty much with Damian Carrington on this.

To interview people suffering from fuel poverty and then have images of wind turbines and being told how expensive they are makes a clear implication of cause and effect but the reality is subsidies have not increased recently and look set to go down. These people are in fuel poverty because of increases in wholesale fuel prices and profit margins from the power companies.

The programs take on an apparent political gaff about singing up to having 15% of all fuels, not just electric, coming from renewables was interesting but since we are no where near to having 15% of anything, irrelevant.

Not enough emphasis was made of the fact that lack of investment (and policy to encourage it) will lead to future increases in whatever energy mix we have. And as I recall nothing was said at all about price parity which will happen for most mainstream renewables within a generation.

Put simply, fossil fuels will continue to increase in future, no one really expect fuel to be under £1 a litre ever again, and renewables, including wind, will continue to get cheaper as technology improvements and economies of scale always does this. Soon conventional generation will be as expensive as some alternatives, even becoming more expensive. So I know which is the most logical to invest in for the long term.

The strange thing is one of the oft used denier arguments is that we will be smart enough to invent our way out of any future crisis but most fail to see that we already have. Even if they insist that they had some different in mind to alternative methods of generating energy, short of a miracle, it will still cost to develop and implement whatever they are holding out for.

I like the Youtube video - My missus already knows that is what I want played at my funeral along with a certain Queen song.

I had doubts about the Panorama programme. IIRC the UK became a net gas importer sometime in the previous decade (2006) since then the gas price has gone up. Likewise with Oil, the UK's production of oil peaked in aound 2000 (1998?). Globally oil production has been on a plateau since 2005 (+/-4%) with (by my calculation) some 25% of global production by nation decreasing as the oil price has increased - contrary to market theory - as price goes up so should production. Increased oil prices are forcing those users who can to switch to natural gas another bias towards increaing gas price - a major factor in electricity generation. These factors were germane to the programme's subject yet weren't mentioned; which made me think the programme was sloppily researched.

On the subject of sloppy research I'm reminded of the recent programme on cold winters. This concentrated solely on the solar-UV link and failed to mention the equally plausible link to Arctic sea-ice. Overall another disappointing programme.

What you describe with oil production is pretty much the symptoms of Peak Oil, and there is some evidence that we are there now. With increasing energy demand it is going to be very difficult for production, even with Tar Sands, opening in the Arctics etc, to keep apace, and these will be more expensive to extract than current sources in any case.
IMO now is the time to be investing in renewables, cobalt and fission reactors, and even gas in the shorter term.

Last stuff I read in the Peak Oil field was a projection from IEA - they had OECD nations with a static to falling oil demand and increasing demand from the Far East (Chindia etc).

The whole problem about Peak Oil is actually concerned with rates of supply. Not so much running out - which won't happen for many many decades. Indeed running out may not happen at all as the last reserves may prove too difficult/costly to get.