Matters arising from D'Aleo 3: The 1940s and the present.

The warming of the 1940s was not like the current warming. There are differences in observations and the model evidence supports the idea that while the 1940s was an outcome of natural variability, whereas the recent warming is externally forced.


The first thing to make clear is that whilst the global temperature series (e.g. GISS) show a warming peak around the 1940s this warming was actually predominantly a high lattitude phenomena in the Northern Hemisphere. 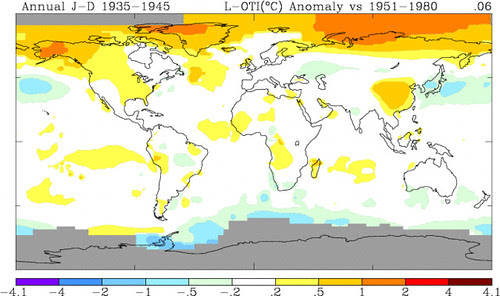 Whereas the current warming is far more marked, of wider spread, and of a different spatial structure. 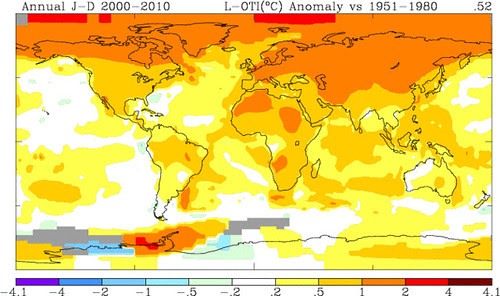 
Johannessen et al use data collected by the Soviet Union to examine the 1940s warming pattern and compare it with the recent Arctic warming. Firstly they examine what models show and note that whilst in one of the 300 year runs they find a warming that is similar to the 1940s Arctic warming period, the 1940s warming is not a common feature of the model runs. This fits with research I have previously discussed, supporting the idea that the 1940s warming was not an externally forced warming but was an outcome of internal climate variability. They also state that: "In contrast, no comprehensive numerical-model integrations have produced the present global warm anomaly without including observed anthropogenic forcing." This I view as a crucial finding, and one I've observed from the papers I've read. 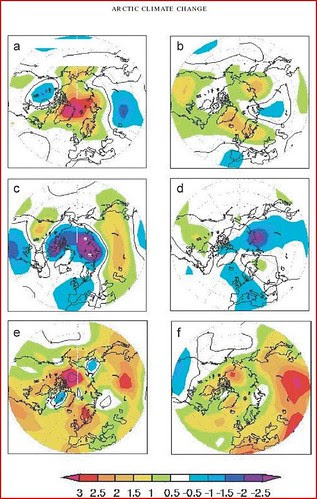 The 1940s warming is clearly regional with a marked spatial structure, as is the cooling following it, whereas the recent warming covers a much larger region and the maximum polar anomaly is concentrated in the area of sea ice loss (Beaufort). This recent pattern is to be expected as the combination of global warming with regional Arctic warming due to the anomalous areas of open water.


In 2008 James Overland and Muyin Wang examined what they call the Recent Arctic Warm Period, they found differences between the 21st century warming and that leading up to the 1940s Arctic warm peak. In that paper they stated: "The winter/spring SLP anomalies for 2000–2007 often have a pressure dipole/meridional geostrophic wind pattern with some resemblance, but different orientation, to the pattern in the 1930s..." They also stated: "This fast track for observed sea ice loss relative to the expected values for ice loss in the IPCC-AR4 climate models relates to the fortuitous timing of the positive AO, recent meridional wind anomaly patterns and ice/ocean feedbacks."

By 2010 their opinion had changed: "Most authors including the present ones considered that the persistent AO and AD patterns were mainly representative of natural variability of the chaotic climate system in the northern latitudes. However, due to recent sea ice loss at the end of summer there is a direct feedback to shifts in the broader atmospheric circulation in late autumn and winter."

These changes are due to the severe reduction in sea-ice, which has lead to the emergence of the Arctic Dipole Anomaly, which is a major driver in recent episodes of sea-ice loss. The Arctic Dipole is now being seen not as just variation in weather but as a positive feedback on the loss of sea ice. There is no evidence to show that sea-ice reductions during the 1940s warming was as great as the severe loss of Arctic sea ice in the last two decades. Given that since 2007 the North West and North East Passages have been largely ice free, it is verging on the inherently improbable to claim that similarly extreme conditions escaped notice in the past.

What is going on in the Arctic now is not like the 1940s. The 1940s warm period was an outcome of internal variability, whereas the recent warming is an outcome of anthropogenically forced change. Now we are seeing a concerted process of warming and ice loss supported by feedbacks, that is not only continuing but is accelerating and will culminate later this century in a seasonally sea-ice free state. There is no evidence that such a state has existed for thousands of years. The last time it may have done, during the Holocene Thermal Maximum, July insolation at 65degN was around 40 Watts/m^2 (almost 10%) higher than at present.