Regarding the Atlantic Multi-decadal Oscillation (AMO). D'Aleo claims it "Looks like an awfully good fit. There is very little, if any, global warming." I've already pointed the following out to him. The Center for Atmospheric Research suggests that the major part of recent ocean warming in the AMO is due to global warming, once the global warming signature is removed the AMO is rather a small effect. So that source suggests that if warmer ocean waters due to the AMO are substantially responsible for loss of Arctic sea-ice, then it is global warming that is causing most of the warming.

However the issue of the AMO is complex. Knight carries out a modelling study and finds that the recent warming is due to a forced response i.e. external forcing like the seasons, or in this case AGW. However Knight also discusses the various methods of removing the AMO. He notes that detrending or similarly removing the AGW temperature signal, carries with it the risk of unintentionally removing some of the AMO signal, as the AMO may contribute to recent global warming. So by that line of reasoning perhaps the adjusted AMO amplitude shown in the previous paragraph could be raised a bit. Knight uses the model data to remove the forced response from observations (figure 8) and whilst the 1940s warming remains a prominent feature, there is very little left of the recent increase of the AMO, what is shown is sugestive of the start of a positive phase, not the mature development suggested by arithmetical removal of the AGW driven Atlantic warming (like the Centre for Atmospheric Research link above). Parker at al use Empirical Orthogonal Functions (EOFs) to extract the signature of the AMO. In their figure 6, in line with Knight's alternate method, they find a pronounced positive AMO in the 1940s but only a very weak positive AMO recently. So perhaps the AMO has even less of a role in the current warming, both global and Arctic, than I'd thought. 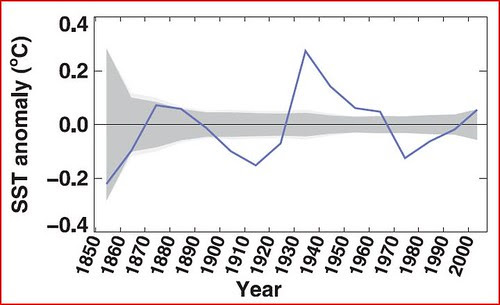 Knight, figure 8. "AMO estimated as the difference between the area-average North Atlantic SST in observations and a multimodel ensemble mean." 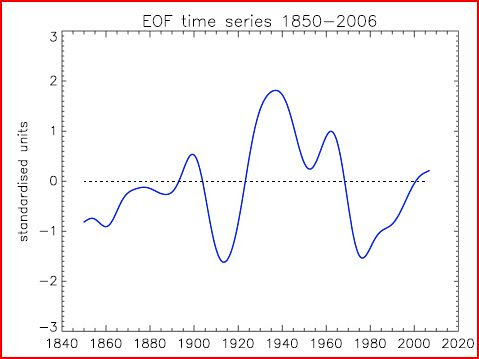 D'Aleo's claims of a role for the AMO are not new. In 2009 Chylek et al published a paper showing a role for the AMO in Arctic warming. They propose a pivotal role in both the 1940s warm period and the recent warming for the thermohaline circulation and find substantially varying polar amplification in different periods. They propose that these variations together with the correlation with the AMO support the role of the thermohaline circulation. Although as I've previously discussed there are many other factors that may explain these changes. With a pseudo-periodicity of around 70 years seeing correlations in a 100 year timeframe is very risky. It would be interesting to see what happens to Chylek's apparent correlation between 1850 (the date Parker and Knight start from) and 1910. 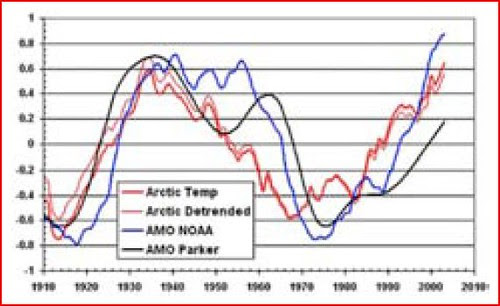 Chylek et al also state "Recent ensemble simulations of several coupled models with the late nineteenth century forcings failed to detect the observed AMO." referring to Knight 2009. However Knight's figure 2 shows the output of various models over the relevant period and clearly several do exhibit mid-century(20th) warmings, athough not to the observed degree. Knight's point is that the ensemble mean should only show the forced response, that the various means discussed do not show the 1940s warming suggests that it is not a forced response but an example of internal variability. If you have various model runs with their own 'internal' variability those instances of variability, like instances of positive mode AMO, will happen at different times. Average those runs and the events happening at different times will average out, i.e. won't appear in the final average. However forced responses, like the current global warming, will happen in all the model runs. Upon averaging they will reinforce each other and appear as a common feature of the multi-model mean.

Given that the 1940s warming seems to be an outcome of a mode of variability in the Arctic, that the AMO should be a key player seems reasonable. However as I've discussed recently, the recent changes in the Arctic are not reproduced by models unless they include anthropogenic forcings, supporting the conclusion that the recent warming is different from that in the 1940s. More about that in the next post.

So although the AMO may be portrayed as a simple explanation, regretably, the reality is far from simple.

As Francis and Hunter 2007 shows and Chylek et al suggests, it is not unreasonable to see a role for the AMO and PDO in the Arctic warming, given that both modes imply changes in wind directions and could therefore increase atmsopheric and ocean heat transport into the Arctic. By the same argument increased ocean heat transport could result. Although on the issue of increased atmospheric heat transport Smedsrud et al, using NCEP/NCAR reanalysis, suggest a reduction of atmospheric heat transport since 1980. And the study by Graversen et al that showed inward atmospheric heat flux as explaining much of the recent Arctic warming has been shown incorrect, most recently by Screen & Simmonds, they find the recent warming to be due to reduced sea-ice. It's worth noting that Screen and Simmonds 2010 find an increase in humidity at low levels in the Arctic due to increased open water. This tallies with Francis & Hunter's 2006 finding that increased downwelling infra-red due to increased humidity plays a role in the reduction of the sea-ice.

Regarding the Pacific Decadal Oscillation (PDO). If the PDO is a major player it seems likely to be tested as the current PDO warm phase seems to be waning (it's hard to say how this will play out as the PDO mechanism is not known).

The PDO is claimed, along with the AMO, to show a good correlation with Arctic warming from 1948 to the present. D'Aleo presents some plots from NCEP/NCAR reanalysis showing this. However this correlation is found during a period of increase of the PDO, and most of that period shows an increase of the AMO. This all happens against a background of increasing Arctic temperatures. So it is to be expected that these two series, trending upwards as they do, show a correlation with Arctic warming. As I've recently been reminded, correlations between series with strong trends are meaningless.


So is it possible that there is some misinterpretation going on with regards the AMO and Arctic temperature? It's notable that the most recent (2000s) warming is concentrated in the Pacific sector of the Arctic (Beaufort/Chucki). Yet the AMO would seem to imply increased ocean heat flux into the Atlantic Sector, where the sea ice edge has not receded as much as the Pacific. Furthermore the AMO's fit with the 1940s warm peak is not close. If the 1940s warm peak was due to the AMO then there seems to be a second peak (NOAA, Parker) or 'porch' (Knight) around 1960 that does not have a complement in Arctic temperature, which decreased monotonically. This apparent problem may be solved if the 1940s warm peak was driven mainly by internal processes, with the AMO (another mode of internal climate variability) possibly being the trigger. Then again if the AMO is due to changes in the Atlantic thermohaline circulation, perhaps internal climate variability in the Arctic drove the AMO - areas of deep water formation are in the Arctic.

This question is most pertinent with regards the arguments of Carl Wunsch. Wunsch, an oceanographer, asks if major past climatic changes are actually driven by changes in atmospheric circulation, not the thermohaline circulation affecting the atmosphere. I really need to read more recent research on this subject, but at present I am persuaded by Wunsch. The thermohaline part of the circulation is actually occurring in small areas of subduction around the Atlantic sector of the Arctic, this requires that the cooled salty water from the tropics be transferred to the Arctic. However the flow is not happening in a pipeline, at each stage of flow localised processes (e.g. the Atlantic Gyre) act to move the warmer water northward. As the wind (combined with the corriolis effect) is the dominant driver of flow in the upper ocean, the Ekman spiral transferring surface drag to the lower layers of the upper ocean, changes in the wind can change the volume of water that is moved up to the subduction zones in the Arctic. Those subduction zones cannot 'pull' ocean from the Caribean to the Arctic. so the answer to how the AMO can correlate with Arctic temperatures may lie in wider shifts in atmospheric circulation.


So whilst attractive, it seems that increased atmospheric heat transport is not a good candidate to explain away the Arctic warming and consequent loss of sea-ice. And whilst inward oceanic heat transport has been a factor in the loss of Arctic sea-ice, with regards these modes (AMO/PDO etc) even if they did not exhibit variations that act in favour of Arctic warming and the loss of sea-ice, they are moving around atmosphere and ocean that has warmed due to global warming.