The AD is a meridional pattern, this means it draws air into the Arctic as the pressure gradients go across the region. In contrast the AO is a zonal pattern, this means that the AO circulates air around the pole so has less of a tendency to draw warmer mid lattitude air into the region. In models the AO is found to go positive in response to increased greenhouse gasses, in the sea ice loss of the 1990s the AO was very positive. However since then the AD has become more prominent and in the last two years there have been winter periods of unusually low AO index which may be due to decreased Arctic sea-ice. The emergence of the AD has been a long term process, the AD has been detected in data covering the 1960s, however it has become a more and more prominent feature of the Arctic climate in recent years. Xiandong Zhang sees the AD as essentially a shift in the center of action of the AO, this shift may be due to decreased sea-ice, so the AD, with it's ability to further promote sea-ice loss, may be a positive feedback on the changes in the Arctic.

Kwok's study of 2009 (figure 2b), whilst examining sea-ice thickness, shows a similar pattern to this latest Maslanik paper. You can see this figure under the heading "Decline in Arctic Sea Ice Thickness" here. As explained in my earlier post Nghiem 2007 is really measuring the fate of the mass of coherent MY sea ice, so it's not directly comparable to Maslanik's findings, although numbers are in the same 'ball park'. Having addressed one part of volume - extent, I went on to look at the other element, thickness.

In Bitz & Roe 2004 they find a similar relationship between thickness of sea-ice and rate of thinning in model studies. Yet in these studies they note that the wind changes have weak trends, and one model has motionless ice! This strongly suggests that the relationship between thinning and thickness has it's roots not in basin wide movement of ice, but in the basic thermodynamical properties of the sea-ice.

So whilst MY extent is telling us that atmospheric configuration and the resultant winds are a factor, the relationship between thickness and thinning is telling us something else. It is true that changes in extent and age will impact thickness. But those changes don't on their own explain the fact that thicker ice has melted more. Only Bitz & Roe's account of the thermodynamic processes can account for that observation.

Furthermore most of the reduction in thickness has occurred in the period 2002 to 2011 at -200,000km^2 per year. What this general statement hides is the detail, from figure 2 it is clear that most of the loss in that period was in 2007 alone as a result of the massive crash in that year, when a quarter of the area was lost. 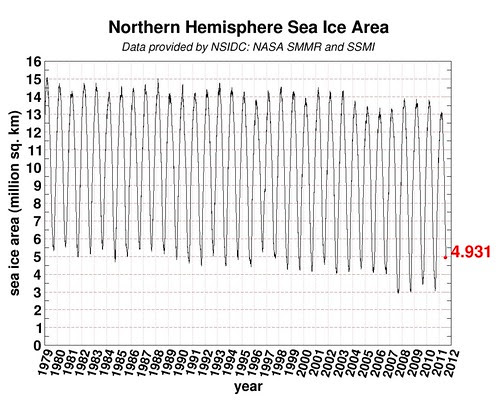 July 21 Sea Ice Area, from Cryosphere Today. Note that at present, in the latter part of July 2011, the sea ice area is less than one would expect for September in the 1980s.

Treating the changes in the sea ice as a trend plus noise, the following can be said about the trend: Sea ice experiences net melt when it's thickness is above the equilibrium thickness and net growth when it's thickess is below equilibrium thickness (Bitz 2008). Obviously this is not necessarily true for year to year changes, where weather is dominant to a large degree, but it can be said with regards the trend.

We are currently in a position where the ice is subjected to a continual and increasing positive forcing due to various factors under the term anthropogenic (human caused) warming, the main one being CO2 increases. This is magnified by feedbacks within the region, making the Arctic the 'canary' of climate change. The changes in MY sea ice extent have in part been driven by phases of change in wind driven circulation, but the equilibrium is constantly being shifted to warming by the anthropogenic factor, the sea-ice is chasing the equilibrium point, which humanity is moving inexorably upward. This explains the dependence of thinning on thickness, i.e. thicker ice thins most.

The process will continue as long as we continue to warm the planet. In light of current emissions rates this suggests that the Arctic will transition to a seasonally sea-ice free state during this century.


Bitz & Roe, 2004, "A mechanism for the high rate of sea ice thinning in the Arctic Ocean." http://www.uwpcc.washington.edu/documents/PCC/bitz_and_roe_preprint.pdf.
Bitz, 2008, - "Some aspects of uncertainty in predicting sea ice thinning." http://www.atmos.washington.edu/~bitz/Bitz_2008.pdf
Maslanik et al, 2011 - "Distribution and trends in Arctic sea ice age through spring 2011.
Posted by Chris Reynolds at 06:20