The Autumn Inflection, and a Digression into Early Summer

Last week while updating my spreadsheets for the first time since September* and generally catching up I realised that there is a feature that I've not addressed before, the change of rate of sea ice gain in Autumn. *The PIOMAS data is now updated, last updated in August, see top box on the right of the page, top link.


Looking at the charts from the University of Bremen the inflection can be seen. 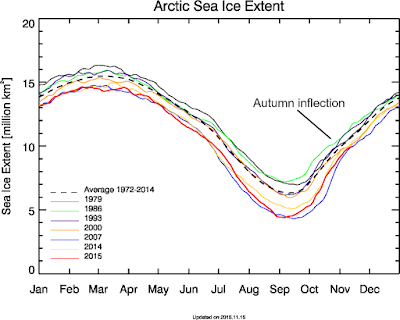 This is also apparent in NSIDC derived data, so it is not an artefact in one dataset, I have said for some years that it is due to the transition from ice extent growth within the Arctic Ocean to growth outside becoming dominant as the Arctic Ocean fills with ice. But I have never shown that this is the case.

I have taken regional sea ice data from Wipneus and calculated the average seasonal cycles for two 9 year periods, Pre 2007 is 1998 to 2006, Post 2007 is 2007 to 2015. The data for 2015 is only updated to 14 November, but that has little impact. The following graphs show the seasonal cycles of extent for regions outside the Arctic Ocean (green), the Arctic Ocean (red), and total Northern Hemisphere extent (black line). Sea ice extent is given in million kmsq. 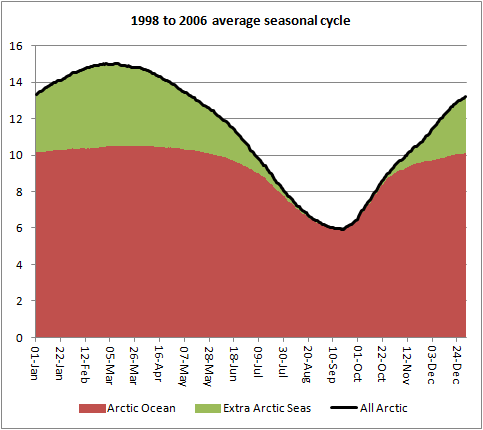 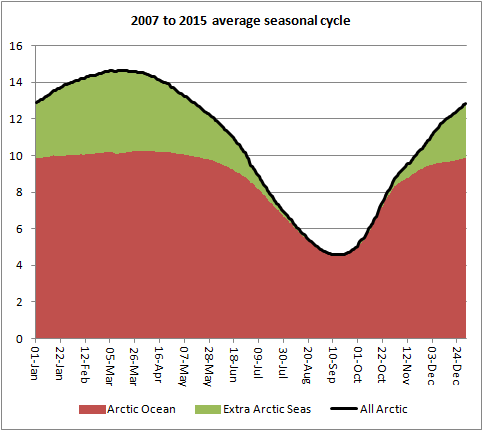 The deeper 'cut' into extent is visible during summer, but what is clear from the above is that for both periods the inflection happens about the same time and is at the point at which Arctic Ocean extent starts to level out towards its peak extent and gains outside the Arctic Ocean start to take over. 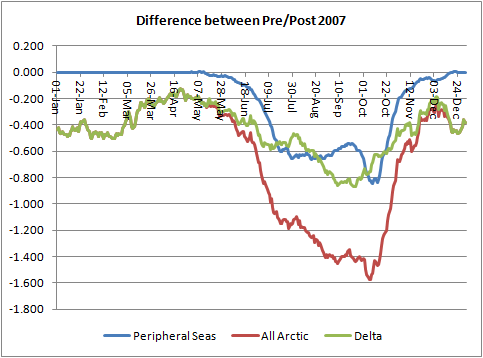 The All Arctic plot shows the same behaviour as anomalies from the 1981 to 2010 baseline do, a steep decline in early summer, a levelling in the rest of the summer into early autumn, then a very steep rise in the late autumn. The green plot is the difference between the red and blue plots, so it shows the effect of taking out the extent in the Peripheral Seas.

What is clear is that when one takes out the Peripheral Seas (blue) autumn's rapid rise in extent is far more muted (green), therefore the increased rate of sea ice extent formation in the 2007 to 2015 period is due to activity in the peripheral seas. This is a result of rapid icing over after the sun sets for the winter across the larger tracts of open water that have dominated the Post 2007 period as compared to the Pre 2007 period.

However, whilst I have this graph it is worth turning to early summer. The same set of calculations also reveals that when one takes away the earlier melt of the peripheral seas, as shown by the drop in the blue plot from late May to early July, the difference plot (green) loses the steep drop shown in All Arctic extent. This is for extent, so can be taken to be indicative of the area behind the ice edge, excluding the impact of melt ponds. So since 2007 there has been a massively more aggressive retreat of the ice edge in early summer within the Peripheral Seas, something we probably all knew but I haven't explicitly shown like this before.

So how fast is this early melt proceeding in the Peripheral Seas? I have calculated the extent loss from 1 June to 31 July and plotted below as a timeseries. 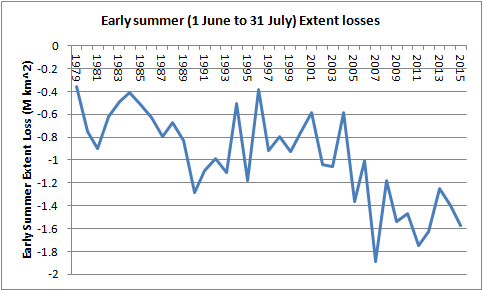 The overall impression from this is of a fast transition of sorts from around 2004 until 2007 when a new steady state seems to commence. I started writing this blog post a week ago but still have no straightforward answer for this behaviour. However it looks more like a new regime from 2007 onwards, not a slide to greater early summer extent loss, and given that we now have nearly 1/4 of the data representing the post 2007 period this is significant.
Posted by Chris Reynolds at 06:54

I think the state of the progress this year gives us a good clue as to what is happening during the inflection.

On the Pacific side of the Arctic, the available perimeter for ice growth is small as the Chukchi growth rate is slowed by the narrow corridor through the Bering Strait. The shallow waters along the Bering Coast are only now starting to form ice. Hence, there isn't a developed perimeter in the Bering yet and those points are offset in Latitude and insolation sufficient to lag.

During the initial rapid growth, the perimeter for ongoing growth is very large. The progress is simply at a point where the perimeter is temporarily restricted on the Pacific side.

It's interesting to see that it happens at about the same time every year.

The issue of Chukchi is inteteresting and is something that didn't occur to me. While some of the slower growth will be on the Atlantic side, Chukchi probably also adds to that slower rate of growth most years, hence the gradual approach to the winter maximum.

I'm interested to look at whether it is possible to reliably and consistently determine a rough date of inflection, I suspect a small trend to later dates with time. But I couldn't crack it yesterday and I've run out of time this weekend. Maybe I'll get the time in early December.

Do you think export has anything to do with this? It seems that export thru Fram Strait has a seasonal cycle, e.g. see fig 5 in this paper
http://onlinelibrary.wiley.com/doi/10.1029/2011JC007004/full. Export seems to rapidly increase from Sept thru to Dec at which point it levels off thru the rest of the freezing seasonal, before begining to decline thru the melt season. I dont know if the magnitude is sufficient to partly contribute to the slowdown (infection) in ice growth at the point you indicate.

I think that the rate of growth of thin ice across large areas far exceeds the export. As is shown in the paper you linked to (thanks, not seen that one), in figure 5: Export increases (thick black - observed) about 0.05M km^2 (1/20 of 1 million km^2). This is against (my first two plots) a massively larger growth of ice with the inflection happening at a specific time. And, as I show, this is about the time when the fast growth filling the Arctic Ocean levels off as it fills with thin ice extent and slower growth outside the Arctic Ocean takes over.

I will try to make time before Christmas to look at the timing of this inflection, I suspect there may be a stronger trend than I had thought at first.

PS, interesting to see the Taylor Diagrams used in that paper. I recently used some at work and it just confused the hell out of everyone. :(