Is Arctic Sea Ice Like a Cup or a Ball?

As posted at Neven's blog, Wagner and Eisenman have recently published a paper building on an active area of research into whether the loss of sea ice will be linear or non linear. Thanks to Neven for bringing my attention to this paper and to HotWhopper for the link to a pre-print of Wagner & Eisenman. Although HotWhopper almost negates the provision of the actual paper by giving a guided tour of some comments at Dumbass Central. ;)


There has been a puzzling discrepancy, which I think this paper gets the scientific community close to resolving. General Circulation Models (GCMs), the sort of highly complex physical models used in projecting climate change, show a linear relationship between sea ice extent and forcing due to human activities. This is in contrast to the more simple energy balance models and single column models otherwise known as 'toy models', which suggest that there is the possibility of a non linear collapse of sea ice.

Such a non linear collapse is often associated with a bifurcation. Understanding a bifurcation is easy in a non mathematical way using something that is probably with you as you read this on your computer; an empty cup, this works with a full cup but liquid spillage is an unnecessary complication. In its stable, and typically desired state, the cup sits comfortably on it's base, if you apply a forcing to it with your finger it can be tipped to an angle, remove the forcing and the cup tips back onto its base. But there is a point at which the forcing causes the cup to tip over and fall on its side, that is the point of bifurcation. At that point the system (the cup on the table) transitions from one stable state, on its base, to another stable state, on its side. There are two 'energy wells' surrounding the stable states, try pushing the cup a little so it's leaning but not falling over, now take your finger away quickly. The cup falls back to its base and may even wobble as it overshoots, rises up the energy well on the other side and falls back again before coming to rest on its base. If you're old enough to remember Weebles, they only have energy well, it's why they don't fall down.

Crucially both states for the cup on the base and on the side are the lowest local energy states for the cup. By applying force from your finger you are pushing the cup up an energy potential slope into higher energy state, then at the 'tipping point' the cup takes over and rapidly shifts to the nearest stable low energy state; on its side.

This bifurcation of the state of a cup has another feature often associated with bifurcations: it takes less energy to push the cup on its side than to raise it back on its base again. This is called hysteresis.

Try the same 'forcing' with a ball and you merely move it around the table proportionate to the forcing, but without any abrupt changes of state. And if you want to move the ball back to where it started it takes the same amount of forcing, there is no hysteresis. The system of the ball and table is a linear system with no bifurcation type behaviour.

So the question is: Is the Arctic sea ice like a cup, or is it like a ball?

Mahlstein and Knutti published a paper in 2012 entitled "September Arctic sea ice predicted to disappear near 2degC global warming above present." PDF Obviously, from the title, they found that at around 2degC of global warming Arctic sea ice disappears, in the summer. They used a set of GCMs and observations of global average temperature and sea ice extent. 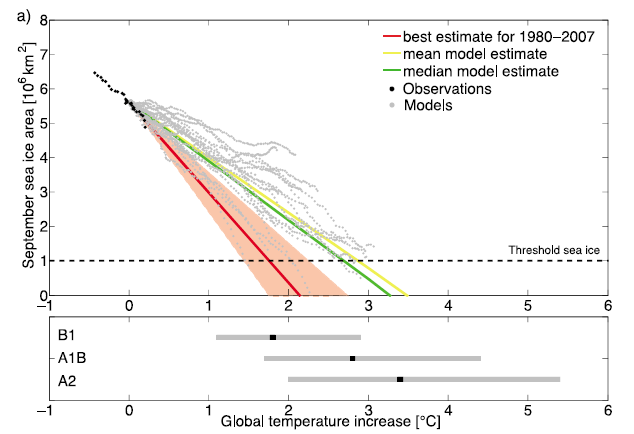 'Threshold sea ice' is the threshold at 1 million kmsq below which virtually seasonally ice free in the summer is typically defined. Here the models seem to predict a higher temperature (later date) which is because real world sea ice loss seems to be happening faster than in the GCMs. The temperature ranges are for the IPCC emissions scenarios stated (B1, A1B and A2), and temperature ranges shown are for the end of this century. I have chosen the case where the uncertainty is worked out using the internal variability from the models.

Anyway, the above graphic shows the roughly linear relationship between global average temperature and sea ice extent in September in both GCMs and observations. Yet studies using the simpler toy models, which incorporate basic physics suggest there may be a non linear relationship in future.

Wagner and Eisenman have published a paper entitled "How Climate Model Complexity Influences Sea Ice Stability." PDF In that paper it is found that seasonal and latitudinal forcing variation, and sea ice thickness changes acts to reduce non linearity. The sea ice thickness factor may partly be a result of winter ice growth acting to stabilise the loss in summer. However a major factor is atmospheric heat transport into the Arctic. Wagner & Eisenman follow a paper by North in which it is found that the poleward heat transport is approximately proportional to the temperature gradient from north to south. Thus as the pole warms faster than the equator the poleward heat transport reduces and this acts as a negative feedback.

Figure 4b of Wagner & Eisenman is shown below. 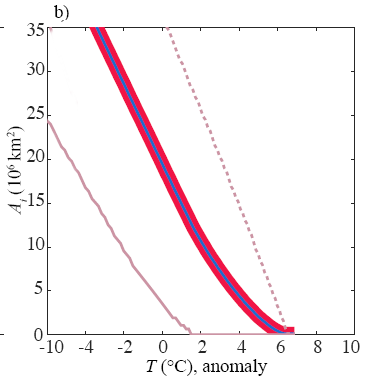 The thick red line is for warming, the thin blue line for cooling, both for hemispheric annual average temperature and sea ice area. Both follow the same path and are largely linear, which agrees with GCM results, no bifurcation and no hysteresis. Were there hysteresis one would expect the two solid curves to follow different paths in the above graph. For completeness; the solid faint red line shows summer area, and the dashed faint red line shows winter area. (I suspect this graphic was changed shortly before printing as the text in the paper seems to be wrong)

So the models are likely correct in not predicting a rapid collapse of sea ice because the 'toy models' that show rapid crashes are doing so because of lack of seasonality and latitude in the seasonal cycle, and lack of heat transport response to warming. The Arctic sea ice seems to be a ball that can be pushed one way then another, not a cup that rapidly transitions to a new stable state.

To answer original question: The Arctic sea ice is more likely to be like a ball than a cup.

In theory loss of sea ice is a reversible process without substantial hysteresis, the practical part of enabling a recovery of sea ice is the hard part, because that involves reducing human forcings upon the planet that drive global warming. So for myself, from a practical point of view, we're still on a trajectory to a seasonally sea ice free state.

There is one final detail, but it is probably just a coincidence. Mahlstein & Knutti find that at around 2degC global warming the Arctic Ocean becomes seasonally sea ice free in summer. In Wagner and Eisenman's study they state:


The model becomes seasonally ice-free at 2degC of warming, and it becomes perennially ice-free at 6degC. These values compare with comprehensive GCM results from Armour et al. (2011), who find the complete loss of winter and summer ice to occur at 4degC and 7degC, respectively.

Regardless exactly what global mean temperature we can expect a totally ice free state in late summer in the Arctic Ocean, the models tell us it will likely not be soon.
Posted by Chris Reynolds at 13:32

Yes they may well do so.

However whilst there is surviving ice at the end of the summer there will be compaction of ice against the Canadian Arctic Archipelago. This keep a remnant of thick ice there, which will be more resilient to melt. Wave action may break up such ice but there will still be enough mass to present a barrier to melt.

Furthermore, stronger storms will have the potential for deep mixing bringing some of the heat of the Atlantic Water layer into play at the surface. But once again this will be working on ice volume many metres thick.

So the claim that a sea ice free or virtually ice free state is here may turn out to be premature.

What counts for the trend in summer minimum, and winter maximum is the amount of forcing from AGW.