The decline in sea ice volume can reasonably be viewed as a process of net energy gain in the Arctic Ocean's ice/ocean system. How can it be possible for the rate of volume loss to reduce, against the trend of past energy gain?

Using the enthalpy of fusion for water as 335kj/kg, the density of ice as 905kg/m^2, and calculating the cumulative sum of interannual differences in daily minimum sea ice volume for each year from 1980 to 2014, I have calculated the energy gain implied by the loss of ice volume over that period. Note that this does not account for ocean and atmosphere warming, merely the energy imbalance implied by sea ice loss. 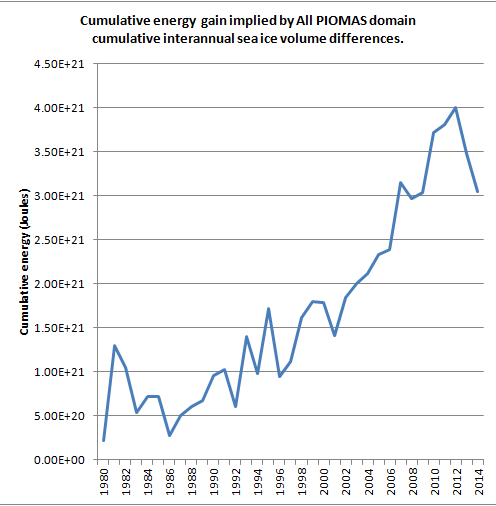 The decline in volume between the daily volume minimae of 1980 and 2012 was 12.5k km^3, this was of a similar magnitude to the average melt season volume loss from 1980 to 2014 (16.82k km^3), around 3/4 of that average summer melt. In short, the total energy imbalance implied by losses since 1980 is almost as large as the energy that goes into melting sea ice during the summer. The energy gain since 1979 is only around 2% of that implied globally due to ocean heat content uptake over roughly the same period (e.g. Nuccitelli et al).

The above figure can be reframed in terms of a metric that has gained traction for looking at ocean heat uptake, that being numbers of Hiroshima atomic bombs. Skeptical Science have done this for global ocean heat content gain using the basis that the Hiroshima bomb had a yield of 6.3 x 1013 Joules. I've used that basis to calculate the SkS Calculation equivalent of Hiroshima bombs, but I have also used the finding from Los Alamos (pdf) of 15ktons yield and Wikipedia's conversion factor of 4.184Gj per kton yield, link. The parallel calculations yield essentially the same result, as is to be expected. 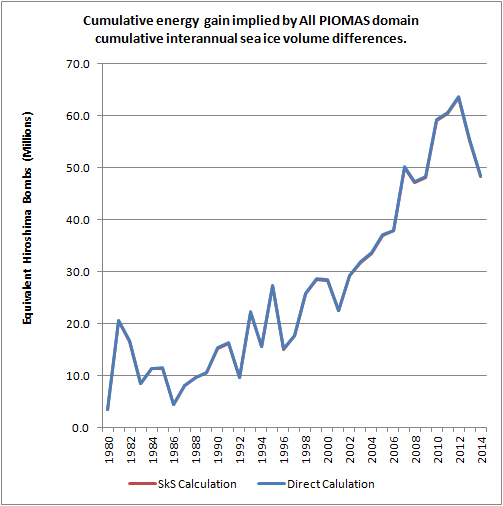 The energy gain involved amounts to 0.78W/m^2 applied over every year from 1980 to 2012, and this cumulative power reduces to 0.56 per year for 1980 to 2014, both based on the Arctic Ocean winter peak extent of around 9.8M km^2. To reduce volume by the total amount lost in one year would require the application of 19.63W/m^2, in contrast the melt season (March to September - 6 months) volume loss implies an average 35.6W/m^2 applied through the melt season. This may seem low in terms of peak insolation, but the ice has relatively high albedo and the seasonal peak is high compared to far lower lead-in and lead-out insolation through the melt season.

How can it be possible that this immense gain of energy can come to a halt?

My argument is that increased growth of ice and loss of heat into the atmosphere both through cooling of warmed open water in autumn, and release of the latent heat involved in the phase change from liquid ocean to solid ice are pivotal energy shedding mechanisms in terms of the ice/ocean system. However the increased volume growth of ice due to the growth/thickness feedback is the process that is already generating greater volume gains in years with lower end of summer volume (or extent).

The following plot shows autumn/winter volume gain as a function of the September extent for the preceding September. 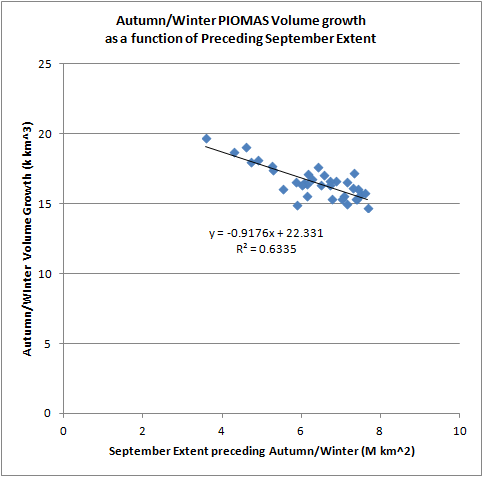 Despite random variation due to weather, there is a reasonably strong relationship between autumn/winter volume gains and the preceding September extent. The relationship is such that as September extent decreases the autumn/winter volume gain increases. To check whether this really is dependent on the preceding season's September extent I have offset the data by -3 years to +3 years to see how this affects the resultant R2 (R^2). These are all done for 34 year periods due to truncation of the data in timeshifting. 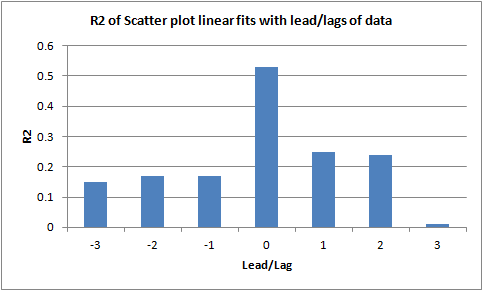 The resultant R2s of the linear fits clearly show that the effect is dependent upon using the correct pairing of autumn/winter volume gain with the preceding September extent. (R2, actually 'R squared' is a measure of how well the trendline accounts for the data points, 0 is not at all, 1, is where every point is on the trend line.)

So as the end of the season results in more open water there is a greater volume growth in the following autumn/winter. It is this growth of ice that has the potential to put an end to the seemingly unstoppable energy gain implied by the drop of volume from 1995 to 2012. It is a negative feedback termed the thickness/growth feedback. 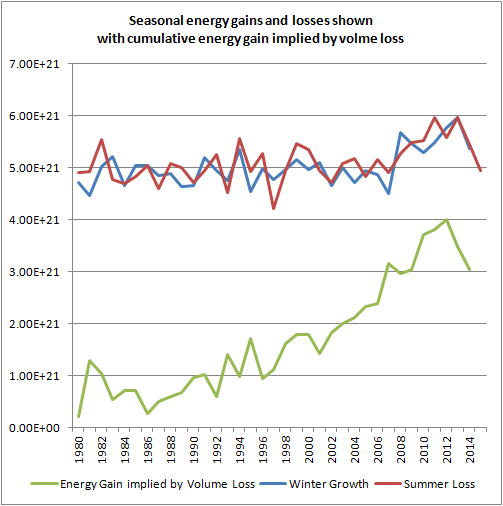 In the above graph I show the cumulative implied energy gain against the seasonal energy gains and losses implied by spring/summer volume loss and autumn/winter volume gain. It is clear from this that the annual increments of total energy gain are very small compared to the overall seasonal losses (red) and gains (blue), whose net imbalance gives rise to the green curve of energy gain.

Lindsay and Zhang have shown that the overall loss of volume in PIOMAS from 1995 to 2004 was driven by the ice/ocean albedo feedback, as discussed here. This is a self-accelerating process in which loss of volume thins the ice and this in turn leads to greater open water formation efficiency, the ease with which open water can be formed in the melt season (spring/summer). However all of the decline in winter volume has come from loss of thick multi-year ice (MYI), with first year ice (FYI) actually countering that loss. PIOMAS doesn't explicitly model MYI, but ice that is over 2.2m thick in April is probably mechanically deformed older ice, that which is less than 2.2m is probably first year ice, this split is shown for the Arctic Ocean below. 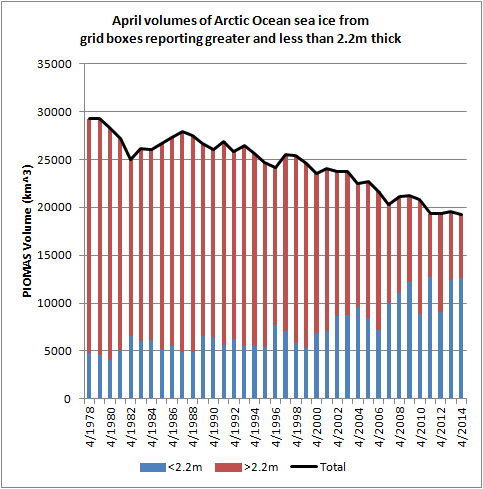 2014 has increased the amount of MYI in the Arctic Ocean, but if this consequence of the summers of 2013 and 2014 is to be interpreted as weather driven and not a semi-permanent shift in spring/summer atmospheric state (this is the conservative view without more years of data), then we will shortly reach a state where MYI gets about as low as it can go without a fully seasonal ice state in the Arctic Ocean. Because MYI is formed by ice circulating within the Arctic Ocean, survival of ice through summer guarantees a residual level of MYI.

Once this state is reached, autumn/winter volume gains will oppose the continuing ice/ocean albedo feedback, and as I argue has happened in from 2010 to 2014, winter volume will peak out to the expected for ice of around 2m thick. A mainly first year ice pack will then decline at a slower rate than previously, with April volume being held high by autumn/winter ice growth, and the thermodynamic thickening of ice through the autumn/winter dictating April volume, and in turn dictating open water formation efficiency through maintaining April volume and stopping the long term decline seen in recent decades.

The continued volume loss would then be determined by winter temperatures, not by summer ice/ocean albedo feedback, and will decline at a slower rate. It is winter temperature which determines thermodynamic growth of sea ice, critical to this is the concept of Freezing Degree Days, which I am working on at present.

Note: I have previously tried to explain this issue in terms of memory differences between MYI and FYI, but it just seemed to confuse the hell out of people, those that got it objected to the use of the term 'memory' in relationship to sea ice. For those who are interested in this angle I suggest reading Section 5, discussion, on pages 8 & 9 of Armour et al 2010, "Controls on Arctic Sea Ice from First-Year and Multiyear Ice Survivability", PDF.

From which I quote:


Given the strong thickness–growth feedback of sea ice (Bitz and Roe 2004), where in a warming climate we can expect the thicker MY ice to thin at a greater rate than the thinner FY ice, and the fact that the ratio of MY to FY ice entering into the MY ice category each year is decreasing, it is likely that the difference between FY and MY ice survival ratios will decrease in a warming climate. If this occurs, the Arctic sea ice system would move toward a regime of decreased memory and decreased sensitivity to climate forcing...

In other words, MYI remembers the insults upon it. FYI forgets each freeze season. Therefore as the pack transitions to a FYI state the memory declines and the persistence of volume loss declines, the trend of loss relaxes.
Posted by Chris Reynolds at 13:49

Hi Chris, I'm trying to figure out the secondary implications of your fourth chart, R2s of the linear fits. Does the correlation in years +1 and +2 mean that the effect of preceding September extent persists (to a lesser degree) beyond the first re-freeze season? Any interpretation of the smaller but seemingly consistent correlations in the minus years?

btw thanks for the quote from Armour et al 2010. It would seem that a decreased level of system memory, during a decadal-scale gradual decline in sea ice, will likely lead to increasing y/y and maybe also seasonal variability.

Maybe your interpretation is worth digging into. However the -ve year lag R2s would imply a forward acting effect, I can't get my head around that right now, so I'm minded towards my initial reason for posting that, just to show the spike at no lag implying the effect between minimum and the following autumn growth is proximate.