Rather than just do a PIOMAS post, this post presents a few reflections on ice state in October as the refreeze progresses using various sources.

PIOMAS shows the pattern typical of the post 2007 period. A central core of thicker ice at the end of the summer, with thinner ice growing to fill the Arctic Ocean. The reason I've done this as an animated blinnk comparison is to show the activity near Beaufort (lower left quadrant). Here the Beaufort Gyre has strengthened and is moving ice away from the Canadian Arctic Archipelago. Will this drive an over-winter export into Beaufort, thence Chukchi and the East Siberian Sea?

Also relevant here is in the lower right quadrant off the eastern coast of Greenland, there seems to be a resumption of export through the Fram Strait.

Both of these factors could play a role in exporting some of the increased volume of ice in the Central Arctic. Relevant here may be that the Met Office has forecast windy and wet conditions for the UK (The Times), this may indicate a low index AO which indicates high pressure dominance over the Arctic Ocean implying a possible strong Beaufort Gyre and enhanced Fram Strait export of sea ice. Scrub that, late at night got high and low index mixed up, the Met Office prediction suggests a high index AO, with low pressure tendency over the pole.

Looking at ASCAT (source) it is possible to see the multi-year ice dominant regions because first year (new growth) ice has different dielectric properties compared to multi-year ice. This results in ASCAT images showing first year ice as grey and multi year ice as white because multi year ice has a stronger radar return. A similar effect can be seen looking at Europe on those plots, see the end of the post, corners and planar surfaces give a good return, cities are replete with such features.

Using the latest ASCAT image (for day 313) I have outlined the strongest white regions for both 2014 and 2012 (brightness and contrast adjusted). 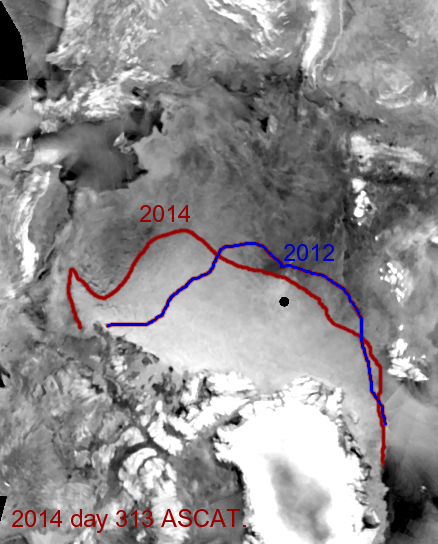 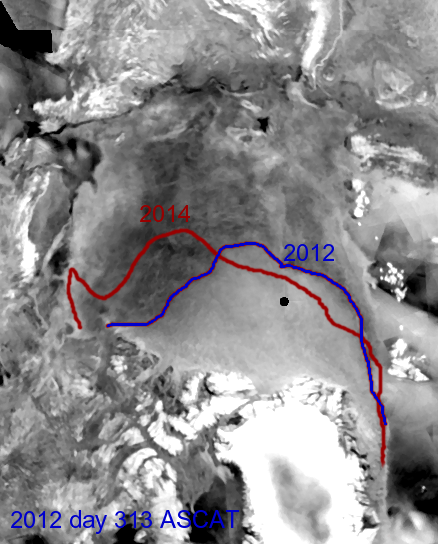 The Drift Age Model (Fowler/Maslanik/Tschudi) supports this view. Again I have taken the most recent plots available and below are week 44 for both 2014 and 2012, note that this is after the annual increment of ice surviving those year's melt seasons becoming year old ice. 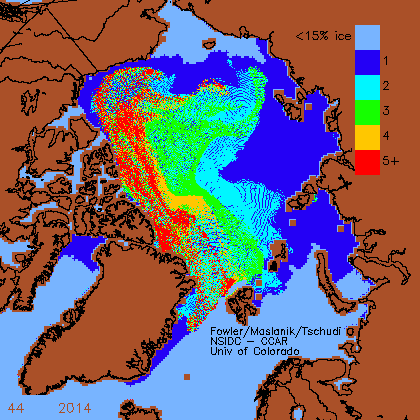 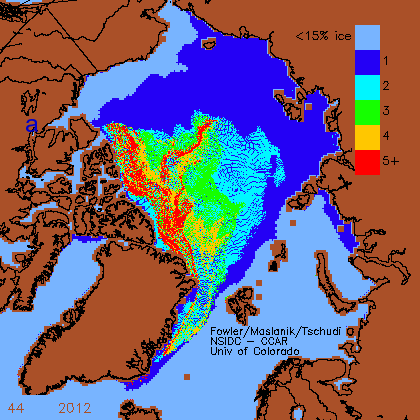 Upon seeing these I recognise that there is also a large amount of multi year ice towards Siberia. Even with a large Fram export, and considering the transpolar drift moving much of that ice away from Siberia, 2015 looks likely to be another rather tedious summer due to thicker older ice and reduced open water formation efficiency.

Returning to the autumn, I have repeatedly posted about research (proper research by proper scientists), and my own (amateur) work, showing the autumn warming due to venting of ocean heat gained during the summer into the atmosphere. NCEP/NCAR reanalysis seems to be slowly getting back to normal, so I have taken timeseries of air temperature for the region north of 70degN and from 90degE to 240degE, an area preferring the peripheral seas of the Arctic Ocean. Timeseries have been obtained from here for three pressure levels, 1000mb (~surface), 850mb and 500mb. 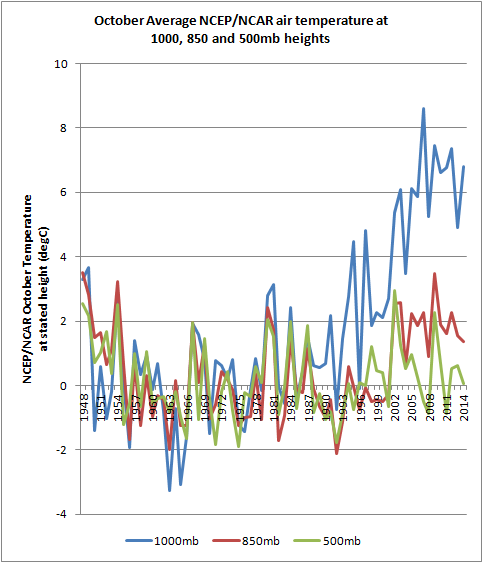 It is clear that in recent years the warming higher up in the atmosphere has been limited, with massive warming at the surface. To examine the relationship between open water during the summer and the amount of heating at 1000mb I first started with a moderately complex method, then found a simple method worked just as well, so I'll first graph the simple method.

Below is a graph of 1000mb temperature anomaly (baseline 1951 to 1980) of NCEP/NCAR 1000mb temperature with a vertically (visually) matched plot of 31 August sea ice extent. Note that 31 August extent covers the whole Arctic Ocean, which is different from the region covered by the atmospheric data. 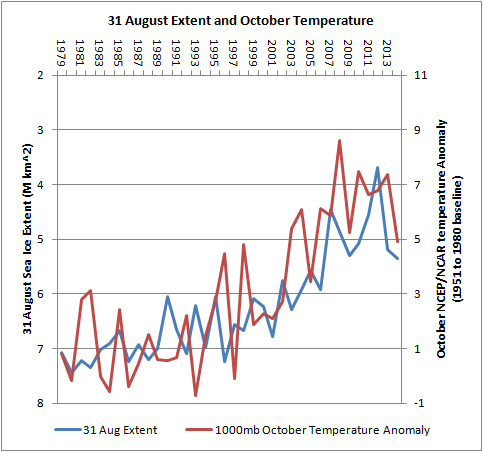 A scatter plot linear fit between the two indices gives an R2 of 0.54, with a negative slope of -2.1degC/Mkm^2 (as the 31 August ice extent goes down the temperature in October goes up).

The more complex method is something I've been pondering for a few years, but has some to the fore of my mind due to pondering Freezing Degree Days. This is a measure I've termed Summer Open Water Days and is simply calculated here as follows: Average extent for March for the Arctic Ocean is calculated from 1980 to 1999, this being 10.612M km^2. The open water for every day from 1 June to 31 August is then calculated as the extent on the given day subtracted from that average March extent. This gives a series of open water figures for each day of the summer from 1979 to 2014. For each year the sum of all days of open water is calculated, this being the Summer Open Water Days, intended to be an indicator that includes the impact of earlier open water.

This is far from perfect, but if I get round to it I intend to switch to calculation based on NSIDC gridded concentration data and factoring in the variation of insolation with time and latitiude, so as to better represent the potential for insolation absorption by open water and resultant ocean heat gain potential.

However using the, admittedly imperfect, Summer Open Water Days calculation, and acknowledging the different areas covered as noted above for the 31 August approach. Here is the resultant manually scaled plot pair. 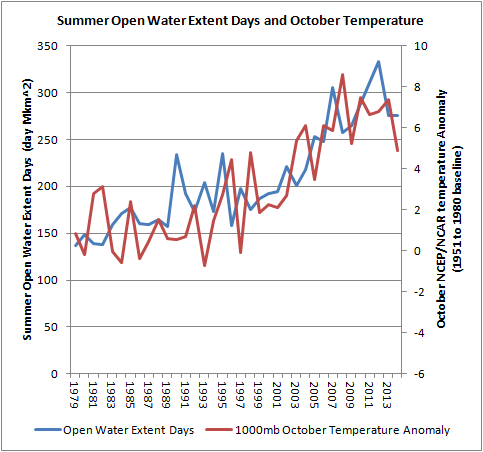 In this case a scatter plot linear fit gives an R2 of 0.51, marginally less than using 31 August data (0.53), though probably not a statistically significant difference. So no gain in using this simple approach, but a more complex approach using gridded data might improve the R2, and in the decades to come with earlier, larger, open water factoring in all summer insolation may mean the approach based on calculated insolation and gridded concentration data may prove useful.

However both of the above two plots imply that there is a strong relationship between the increasing open water throughout the summer and increasing October lower atmospheric warming.

The regional PIOMAS data I provide based on gridded PIOMAS data is now updated to cover October, except the daily data (which doesn't matter because I don't think anyone uses that!).

Data is available via this page as usual. 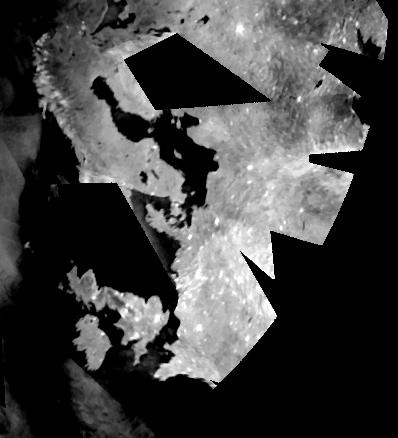 2015 looks likely to be another rather tedious summer due to thicker older ice and reduced open water formation efficiency.

That says it all, really. Nothing worse or more "tedious" than "thicker ice," eh?

That says it all, really. Nothing worse or more "tedious" than "thicker ice," eh?

To watch, certainly. It's a bit like a goalless football match.

Or would you disagree? Do you find a slow melting season more spectacular than something like 2012?

Still got some posts to come on this 'slow transition' issue. But I keep getting diverted onto other (non sea ice) things.

Don't be so infantile.

Don't forget that the Drift Age Model also had a protrusion of older ice in that area during the winter of 2011/2012, and yet 2012 went on to obliterate most of that ice.

I'm not convinced that that ice could withstand 2015 if the weather favors melting.

Agreed, I just think we have to rely on what seems to be typical (given that since 2007 we have a very short dataset), and let the 'black swans' do what they will do.