James Screen has released a lot of important papers on Arctic sea ice loss and the atmosphere, he's done it again, in "Influence of Arctic sea ice on European summer precipitation.", not paywalled.

I'm particularly excited about this because it goes some way to supporting something I've been going on about for two years now. I should point out at the outset - it is very unlikely that Dr Screen is aware of my persistent blogging on this subject!


On 21 September 2011 I posted a blog post entitled Summer Daze, in it I examined a new atmospheric circulation post 2007 that could explain the cool wet summers we've been having in the UK, as seen in the Central England Temperature Series (CET). Using CET max (the record of daily maximum temperature) for the June July and August average it can be seen that after 2007 there is a deviation from the 1975 to 2006 trend, and the deviation has all been downward until 2013. 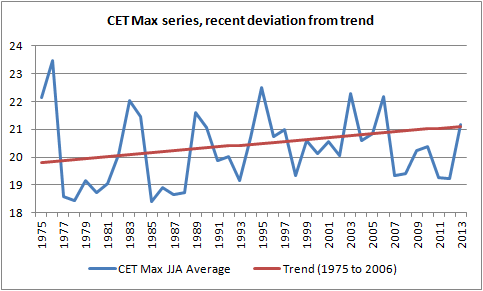 In the process of investigating this I found that the average sea level pattern for 2007 to 2011 had a rather unusual pattern, this behaviour continued into 2012. 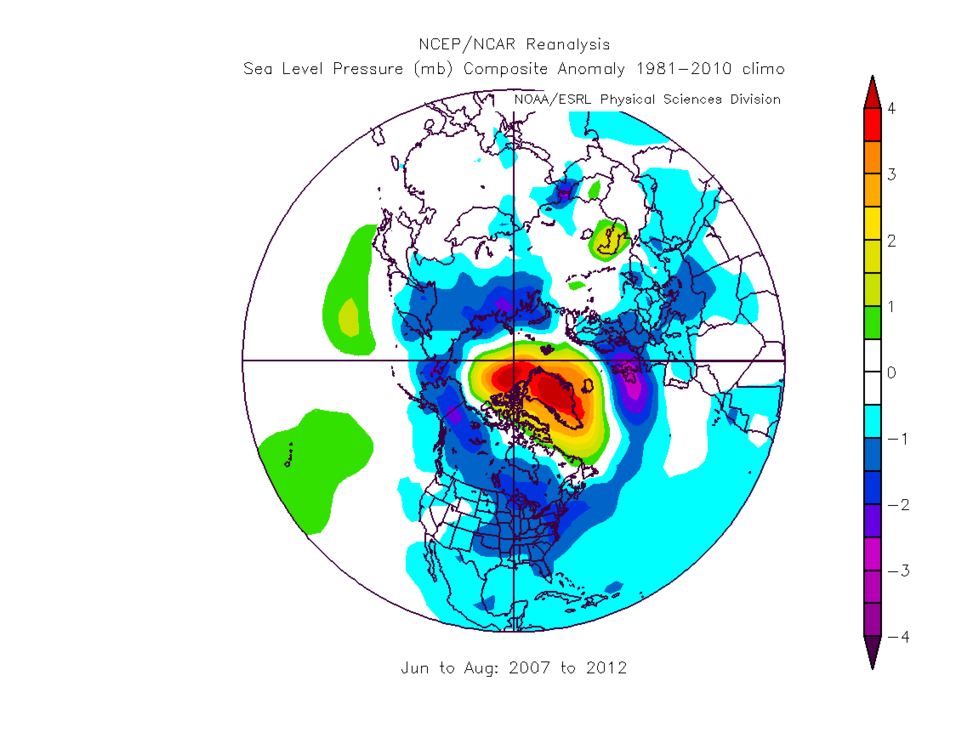 As can be seen from the above image, the pattern has a bullseye of high pressure over Greenland and the central Arctic Ocean, with a halo of low pressure tendency around it. Sea level pressure (SLP) over Greenland doesn't really make sense, however the same pattern can be seen in geopotential height, although it's stronger in SLP. This pattern causes an Arctic Dipole pattern within the Arctic, as discussed here. What initially struck me though was the strong low pressure anomaly over the UK, which tied in with my looking at our string of cool wet summers from 2007, until 2013 which broke the pattern. I've recently shown how odd the post 2007 behaviour is using an index of pattern correlation with the summer pattern and monthly SLP from 30 degN.

Anyway, 2007 is significant as a starting year because that year was the year of a massive sea ice crash from which the ice has not recovered, even in 2013! 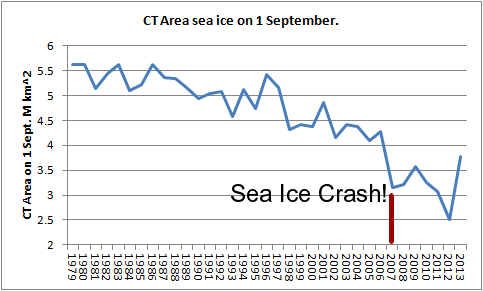 So James Screen is the latest scientist to have noticed the impacts of the loss of sea ice post 2007 and he has asked the question - is there a link to precipitation in the Europe?

The England and Wales precipitation anomalies show the significance of the post 2007 wet summers as seen in figure 1b of Screen 2013.

As is noted in the paper, the post 2007 wet period is the most protracted period of high precipitation anomalies in the summer since 1900.

By grouping together the wettest and driest years and looking at the low of air at the 300 mbar pressure level in the atmosphere Screen is able to show the proximate cause of the wet and dry weather, changes in the jetstream. Note that the box over the UK and north west Europe is the study area.

The 300mb flow around the earth (meridional flow) is able to show the jetstream, in wet months and dry months, see the paper for details. This shows that the dark green of the jetstream flows across the study region in wet years (a) and above the study region towards Scandinavia in dry years (b), diverting low pressures away and allowing high pressure to bring stable dry weather.

There is significant similarity between the two plots. The significance of this similarity is even stronger considering that the above plots show northward (red) and southward (blue) flow at the height of the jetstream, so this plot is effectively showing the ups and downs of meanders in the jetstream, or Rossby waves around the earth on the polar jet. So the similarity between these two patterns amazes me. But what it going on is that by whatever means, the loss of sea ice is driving a large scale atmospheric behaviour similar to that which typically causes wet summers in north west Europe.

The end result of all this is that the recent wet period is shown to be related to the loss of sea ice, Dr Screen would probably want a qualifier in that statement, but I'm drawing on the coincidence of the 2007 sea ice loss event and the start of cool wet summers in the UK and wet summers across the region of study in this paper. That's just too big a coincidence for me to swallow.

As for what is causing this, Dr Screen has a whole section on that, as the paper's open access you can read it for yourself. Which is my get out - there's a lot in there and it will take me some time to digest. But to sum up, something about the post 2007 sea ice loss is causing the jetstream to be deflected south bringing cooler wetter weather to northern Europe. But this effect is small compared to overall variability, as the paper notes this means other factors can intervene and overcome the small signature of sea ice loss, which makes me think of the puzzle of why the summer pattern failed to appear in 2013. This may also be part of the problem with the Francis & Vavrus paper I've blogged on recently. However when forced with sea ice changes the model picks up the same signature as is common to wet years in the study area.

This is mainly a sea ice blog, what does this mean for sea ice? The relatively muted losses of 2013 can now more strongly be viewed as a one-off, with the 2007 to 2012 behaviour looking more like a new normal. The model brings out this remote response in Europe, which I still see as part of a wider behaviour. This is exciting news because it suggests that rather than facing more summers like 2013 in the Arctic, we're likely to see a return to the 'new normal' next year and thereafter, with the Arctic wing of the pattern causing a dipole, which is conducive to sea ice loss.

As for the UK and north western Europe, both regions were the seed bed of the industrial revolution, it is deeply ironic that they should be some of the first parts of the world to experience both colder winters and cooler wetter summers as a result of sea ice loss, which is of course due primarily to human activities*.


*I have noticed the traffic from Judith Curry's ClimateEtc, no problem if Dr Curry wants to refer to any of my posts it's all public domain, but I'm not having my time wasted by people who deny anthropogenic climate change and its primary role in sea ice loss. There are places for such views, such as WFWT and ClimateEtc. This is not such a place.
Posted by Chris Reynolds at 14:30

Matt Owens (of the Fairfax climate watch blog) flagged the possibility an interesting connection between the recent decline in sea ice extent and a large uptick in the number of insurance losses being reported in the United States - which Prof. Kerry Emmanuel had presented.

Here's the right one:

Rarely comment here, but you will have noticed my loquacity @neven's, where I answer to idunno.

There, in a comment, and above,you have asserted that ASI loss is primarily due to CO2.

I think that your take on this would merit a full post here, possibly with a crosspost at ASI.

Curry has added you to her sidebar; quite why, as ever, idunno.

If her readers are coming here, I think this might be an interesting educational opportunity for (some of) them.

I did a post on CO2 and sea ice loss early last year, here.

I'm similarly clueless as to why Dr Curry has linked to this blog, but it's public domain so I am not objecting. As for educating denialists - I don't intend to waste my time trying that. ;)

I asked Curry to remove the link to the ASIB, but she never did. I'll sue her once I have enough money. ;-)

I don't object to anyone linking to this blog, although I do sometimes shake my head at the uses posts are put to.