The Spread of Downwelling IR in models.

In "On the reliability of simulated Arctic sea ice in global climate models" Eisenman et al examine the interplay of infra-red (IR) radiation in GCMS and albedo adjustments used to 'tune' the output of the models to better fit with observations.

Eisenman et al examine the 40W/m^2 spread in downwelling long wave (or infra-red) in a large sample of models. 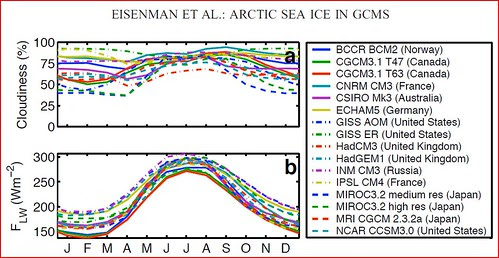 Jakobsson et al find that the change in July 65degN insolation that lead to near ice free conditions in the Arctic around 6 to 8k years ago was around 40W/m^2. This gives an indication of the significance of the 40W/m^2 spread of IR radiation in GCMs, especially when you consider that July insolation isn't being applied year round, as the spread in IR is.

Using two mathematical models, less complex than GCMs, Eisenman et al find that this spread in IR implies a substantial range in equilibrium sea ice thickness. They note that most of the ice in the North American sector (off Greenland and the CAA) has a residence time of at least 5 to 10 years, this was based on research in 2004. I'm confident it is much less now, from Maslanik's work, probably a bit over 4 years. This long residence time gave the ice ample time to reach equilibrium thickness of an average of about 3m. This is borne out by PIOMAS gridded thickness data. The reduced complexity model runs from Eisenman et al find that the IR spread implies a spread of equilibrium thickness from 1 to 10m, far in excess of the observed spread of equilibrium thickness.

So what do the modellers do about this problem? As Eisenman et al state: "A frequently used approach in GCM sea ice components is to tune the parameters associated with the ice surface albedo." Tuning is a common feature of all complex models where the problem being studied has patchy data with which to analyse it. Patchy data can imply that some aspects of the model physics are not properly constrained by observations. So adjusting internal parameters to make the overall model output fit more closely with a parameter that is a result of the model is done where those internal parameters are not closely constrained by observations. I should stress here that the 'result' of the model I'm talking about should be chosen such that it depends on a wide spread of model parameters including the ones not properly constrained. PIOMAS has been tuned in a similar manner, with model output being matched against a subset of the DRA submarine data, a subset that is not then included in subsequent validation intercomparisons.

Eisenman et al find that in many models the adjustment used is to adjust surface albedo. In my previous post I've covered research into the substantial albedo impacts of the transition to a largely young ice pack, and what this means for energy gain. The adjustments in albedo that Eisenman et al discuss are small, less than 10%. Is there an equally large spread of downwelling long wave (DLW) in CMIP5? I don't know, I've been unable to find anything on this in the literature.

Eisenman's main point is that the projections made by models need to be considered with care. This doesn't mean that the models are of no use, as I've discussed several times before, models show behaviour of the atmosphere that plays a role in recent ice loss. Furthermore they're crucial for diagnosis and attribution of AGW and its consequent impacts, even within the Arctic where their performance with regards sea ice is arguably poor.

More interesting to me is the implication of DLW and ice thickness. Eisenman use two basic models of less complexity than GCMs, but their work also implies that GCMs show the relationship between DLW and sea ice thickness. This implies that while other factors, such as changes in ice export through the Fram Strait may have contributed to thinning, increased DLW would be continually driving the equilibrium thickness downwards. Eisenman et al note that the changes of DLW involved could be too small to detect using current instruments. Need I mention Bitz & Roe again?

CO2 increases drive a continual increase in the amount of downwelling IR. However it is not as simple as pointing the finger at CO2 and letting the matter rest there. Francis & Hunter 2006 find that changes in DLW play a significant role in ice loss during spring. The authors state in the opening of the paper.


Limited data have hampered attempts to identify which culprits are to blame [for sea ice loss], but new satellite-derived information provides insight into the drivers of change. A clear message emerges. The location of the summer ice edge is strongly correlated to variability in longwave (infrared) energy emitted by the atmosphere (downward longwave flux; DLF), particularly during the most recent decade when losses have been most rapid. Increasing DLF, in turn, appears to be driven by more clouds and water vapor in spring over the Arctic.

They find that anomalies in surface insolation are negatively correlated with ice retreat, meaning that variation in insolation isn't the driver of the trend in ice area loss. However DLW is consistently positively correlated, supporting the idea that it plays a role in the trend of ice loss. I had thought before when reading Francis & Hunter that perhaps cause & effect were getting mixed up. They show significant contribution of DLW from around mid June (the earliest period considered) to the sea ice minimum over much of the Arctic, so maybe the correlation is due to open water venting more water vapour and warming the atmosphere. However upon re-reading it's occurred to me that I was thinking with a post 2007 mindset, over regions considered there was much more ice cover, especially towards June. In any case, just because more water vapour is a consequence of reduced sea ice, that doesn't mean sea ice can't be further affected by the resultant increase in DLW, as Eisenman et al shows.


Increased temperatures, cloud amount, and water vapor—consistent with global-scale anthropogenic effects—enhance the atmosphere’s infrared emission, which reduces the thickness as well as the extent of the thinner ice cover.

So the increase in DLW is mainly due to water vapour feedback on temperature and increased influx of more humid sub-arctic air. It remains at the global scale that CO2 has its small but persistent effect. But CO2 driven AGW remains the base driver for the loss of sea ice in the Arctic, see here, whatever intermediate processes come to play.


PS. While looking for CMIP5 work on DLW I came across this:

As it's only submitted, I can't get access, but from the title, and having read the author's previous work, it looks like it has the potential to be very interesting indeed.

Interesting stuff, if a bit over my head. Thanks!

Chris, cloud parameterization in an evolving arctic seems to be at the heart of the problem and brings back to mind The Boundary Layer Response to Recent Arctic Sea Ice Loss and Implications for High-Latitude Climate Feedbacks, Kay, Raeder, Gettelman, & Anderson, Journal of Climate, 2011.

If you recall, Kay et al found unrealistic arctic cloud formation in response to decreasing arctic sea ice in global models. This led to an unrealistic reduction in the net energy into the system.

It appears that the inter-model spread was huge; 1 meter equilibrium ice thickness vs 10 meter thickness! That's an almost unbelievable spread. Obviously what this means is that to get these models to match historical data a parameter had to be tuned - and albedo seems to have been the most common parameter of choice.

I'm sure that most of the CMIP5 models now incorporate more accurate cloud formation physics for the arctic, but as we've seen with the melt pond formation and evolution papers there is a lot of work to be done regarding albedo effects.

On an unrelated topic, remember the anomalous ice extent in the Bering Sea last spring? I wonder if the WUWT crowd or Steve Goddard spend any time reflecting on how absolutely wrong they were (and still are)? They might as well dump a tray of ice cubes into the ocean off Bermuda, take a picture, and then claim:

Sea Ice Found In the Tropics!

Sorry for not being as clear as I might be, if you have any questions just ask.

To be clear - the 1 to 10m is for the reduced complexity mathematical models. Although this finding combined with albedo adjustment might be part of the reason for the differing sizes of GCM seasonal cycle and thickness.

From my reading Kay et al is interesting in comparison to Boe et al "Current GCMs’ Unrealistic Negative Feedback in the Arctic", PDF: Kay find that the September 2007 response of the atmosphere isn't unrealistic, due to a well mixed boundary layer there does seem to be a strong cloud response. But earlier in July the cloud response is too much because the boundary layer is more stratisfied.

Whereas Boe et al find that the boundary layer inversion during winter is too strong in models. This leads to excessive low temperatures above the ice, and too much IR loss, overly thickening the modelled ice.

WUWT? Their predictions will continue to be wrong because they've backed the wrong theory explaining what's going on in the Arctic. I doubt they spend any time reflecting how they're wrong, a belief driven agenda argues against that, when they're wrong they just forget it and move on in search of evidence in support of their ideas.

Oh, that wasn't criticism, at all. Just acknowledging my limitations.

"The Gulf Stream is an ocean current that modulates climate in the Northern Hemisphere by transporting warm waters from the Gulf of Mexico into the North Atlantic and Arctic oceans1, 2. A changing Gulf Stream has the potential to thaw and convert hundreds of gigatonnes of frozen methane hydrate trapped below the sea floor into methane gas, increasing the risk of slope failure and methane release3, 4, 5, 6, 7, 8, 9. How the Gulf Stream changes with time and what effect these changes have on methane hydrate stability is unclear. Here, using seismic data combined with thermal models, we show that recent changes in intermediate-depth ocean temperature associated with the Gulf Stream are rapidly destabilizing methane hydrate along a broad swathe of the North American margin. The area of active hydrate destabilization covers at least 10,000 square kilometres of the United States eastern margin, and occurs in a region prone to kilometre-scale slope failures. Previous hypothetical studies3, 5 postulated that an increase of five degrees Celsius in intermediate-depth ocean temperatures could release enough methane to explain extreme global warming events like the Palaeocene–Eocene thermal maximum (PETM) and trigger widespread ocean acidification7. Our analysis suggests that changes in Gulf Stream flow or temperature within the past 5,000 years or so are warming the western North Atlantic margin by up to eight degrees Celsius and are now triggering the destabilization of 2.5 gigatonnes of methane hydrate (about 0.2 per cent of that required to cause the PETM). This destabilization extends along hundreds of kilometres of the margin and may continue for centuries. It is unlikely that the western North Atlantic margin is the only area experiencing changing ocean currents10, 11, 12; our estimate of 2.5 gigatonnes of destabilizing methane hydrate may therefore represent only a fraction of the methane hydrate currently destabilizing globally. The transport from ocean to atmosphere of any methane released—and thus its impact on climate—remains uncertain."

Thanks for that, I've replied at your blog.
http://theidiottracker.blogspot.co.uk/2012/10/gulf-stream-destabilizing-methyl.html

Due to ill health I'm putting comments on moderation for a while.