Statistical extrapolation of volume loss has been used to make the claim that the Arctic sea ice faces a rapid decline to a state of summer open water within a few years, or at least this decade. Is this technique likely to give expectations that will be disappointed?


Wieslaw Maslowski has produced trend extrapolations based on the NAME model, one such is seen in the paper "The Future of Sea Ice" (PDF) of which Dr Maslowski is lead author. Dr Maslowski has argued that model resolution is a key issue in correctly modelling the substantial volume decline since 1995. I don't intend to pursue that in this post. The following graphic is figure 9 of the above cited paper, it shows a trend extrapolation that has been one of the extrapolations popular amongst amateurs following sea ice and activists.

Perhaps a more common presentation is the extrapolation presented by Wipneus based on PIOMAS data. Wipneus has cautioned frequently about the risk of incorrect expectations when considering trend extrapolation. The Arctic Methane Emergency Group (AMEG) have used such graphs to claim that the sea ice faces a rapid crash, ref, in support of related claims of imminent climate catastrophe (of which I am sceptical, but that's another story). In the function fitted on that page a crash to zero is an outcome of the mathematical function, this tells us nothing about future behaviour in the real world.

Wipneus has produced a graph of the fit of a variety of functions (with the recent years included), not all functions crash to zero. 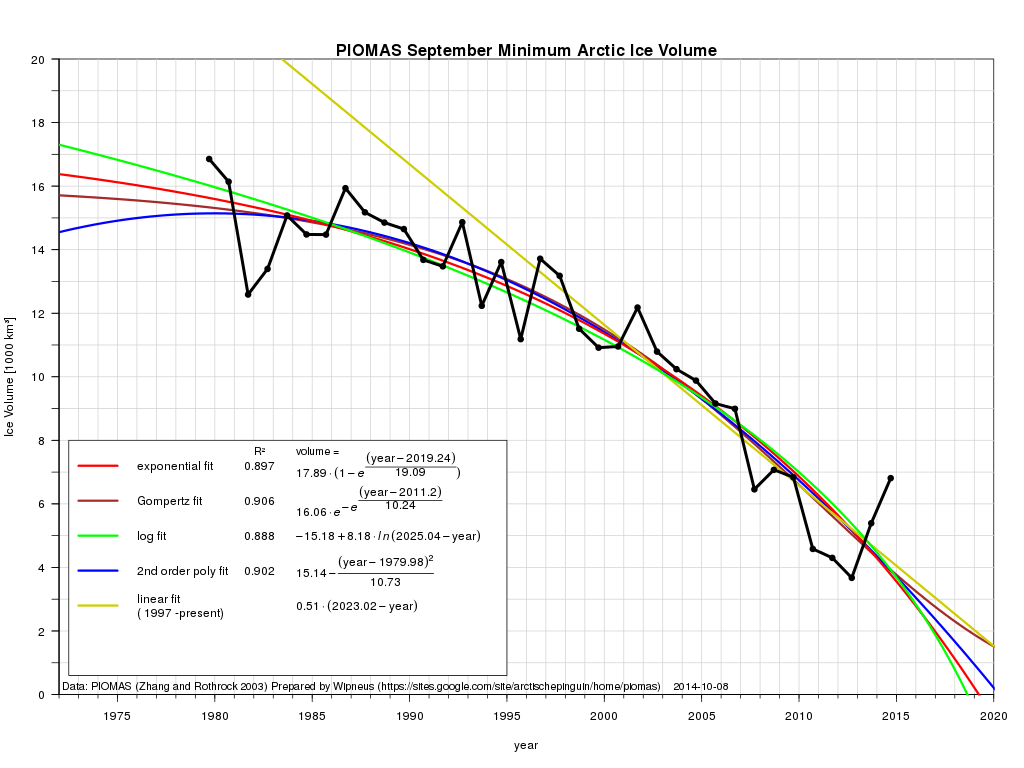 However this is still not a guarantee that any of those extrapolations are what will follow throughout the rest of this decade and thereafter.

It is worth noting that O&W 2013 find that: "At present, it is not possible to completely choose one approach over another as all approaches have strengths and weaknesses."

However I have always been deeply sceptical of 'trendsetters', or rather of the application of the technique of extrapolating statistical fits to curves and drawing conclusions of an imminent rapid crash of sea ice. My previous view that we faced a rapid crash was not based on statistics, rather it was based on the implications of a thinning of the winter sea ice and the behaviour of open water formation as a function of April thickness. This view was explained here, but since then I have come to the conclusion that winter sea ice will not continue to thin rapidly due to increased autumn ice growth, and that as a consequence a rapid crash is very unlikely.

I have been challenged by a claim that curve fitting is a strong technique due to the strength of fit to past data giving strength to the predictions from extrapolating the curve. It matters not who has asserted this, what matters is that this is a common misconception. My reply to that point was to post the following graph, with quadratic fit and extrapolation to zero. 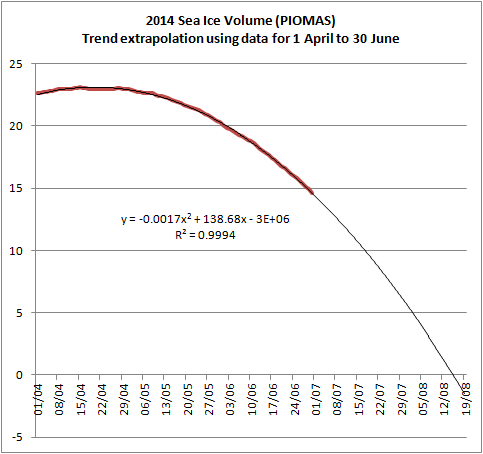 Obviously fitting a trend and extrapolating to zero based on spring volume losses is daft, this could be attacked as an exercise in reductio ad adsurdum. But there is a serious point behind this.

The fit of the curve to 'historic' data is excellent, with an R2 of 0.9994 this is the best fit I have ever seen to 'real world' data (OK, PIOMAS is a model but it is the best long term proxy for sea ice volume that we have). R2 (R squared) is a measure of how well the fitted function represents the data, 0 means not at all, 1 means a perfect fit.

The serious point is as follows. Let's suppose that sea ice had only been discovered in the winter, and by March a massive effort was put into establishing and monitoring its volume, so the only data we would have had by late June would be that shown in the red line above. Given how good the fit is, would it be so unreasonable to allow the excellent fit of a simple quadratic to that data to persuade us into thinking that the fit was reliable for future prediction by extrapolation? The resulting conclusion would be that by mid August easy navigation over the Arctic Ocean would be a certainty, that could prove a costly mistake.

We face a similar situation when fitting an exponential function to the year on year decline of September volume, or indeed for any other month. We know that the Arctic Ocean has been seasonally sea ice free in the past, but we do not know how fast the past transitions occurred because paleo-proxies don't give us that information. Our set of data shows a decline of volume that fits an exponential, it is in the nature of such an exponential to crash to zero, and people take the past fit as meaning that a crash is imminent.

However despite the staggeringly good R2 of 0.9994 here is what subsequently happened as the data rolled in for the summer. The blue line showing the continuation of summer volume through to late August. 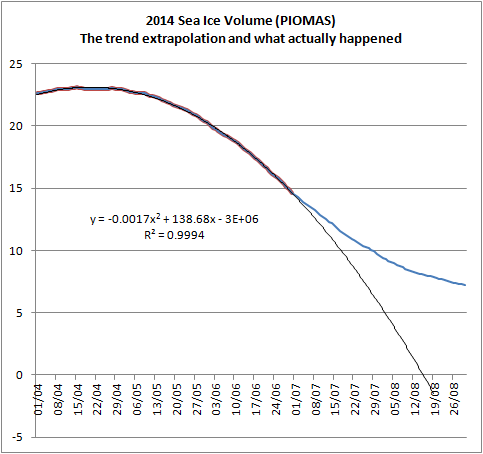 For every instance in which curve fitting produces a fit that continues to track the data as new data comes in it may be possible to cite an instance in which this does not happen. To get a more reliable idea of what happens next we need physics.

The best representation of physics are the sea ice models. I am not alone in having doubts about the climate models, although it seems to me that the assimilating models (that incorporate observations) are doing a much better job. A major reason for scepticism are graphs like the one below. 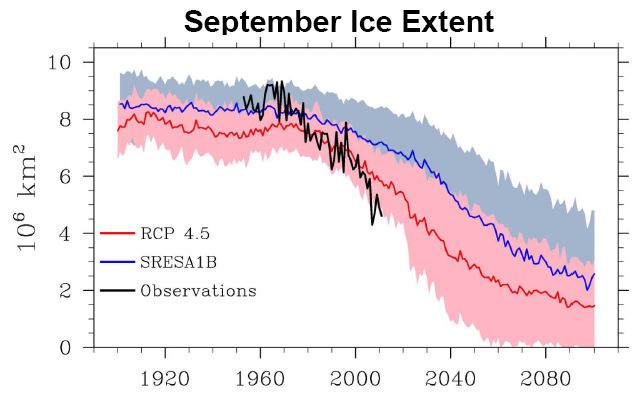 From such graphs the impression of poor performance of climate models is gained, I suspect that this is part of the reason for the popularity of the trend extrapolation to zero. However it seems to me that there is an implicit, and possibly incorrect, assumption here. That assumption being that because current extent and volume losses are greater than in the suite of sea ice models used in IPCC projections, this means that the declines will continue to be as severe as in the past. This conclusion does not necessarily follow from the observed difference. Rather, it is quite possible that the overall form of the climate model projections, a sigmoid form, will emerge in the real world behaviour of sea ice, and a major reason for this to be expected is enhanced autumn/winter ice growth in response to the decline in summer extent, and summer thickness.

I expect that the trendsetters, with expectations of a fast transition to a seasonally ice free Arctic Ocean by around 2020, are likely to be disappointed. The reasons for this lie in some basic physics of sea ice, which I will try to demonstrate over the next few weeks.
Posted by Chris Reynolds at 11:44