In this first monthly status blog post of 2015 I'll be using a technique used last year in this post. But I will explain, so no need to go reading that post before you read this one. To be frank there isn't a great deal of demand from the data for anomalies, but it's as well for me to start using the technique as I will throughout this year.


January NSIDC Extent is the third lowest on record for the NSIDC Sea Ice Extent dataset at 13.62M km^2. Note that data for 1987 is missing due to a gap in satellite coverage. 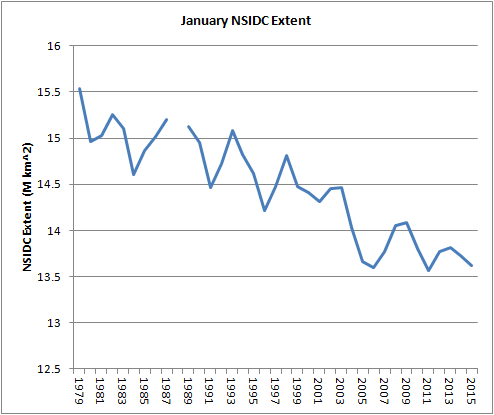 This continues the long term trend of sea ice extent decline, however the difference between the lowest four years is so small they can be considered practically equal (due to the uncertainty involved in assessing actual sea ice extent).

As I will show this low extent is coming from seas bordering the Atlantic and Pacific Oceans. But before I do so I need to define some regions which I will use throughout the year. The regions Wipneus and myself use in our calculations (of extent/area and PIOMAS volume respectively) are from the Cryosphere Today website. I've amended their regions to make some sectors that in my experience best represent regional weather conditions and long term climatological factors. 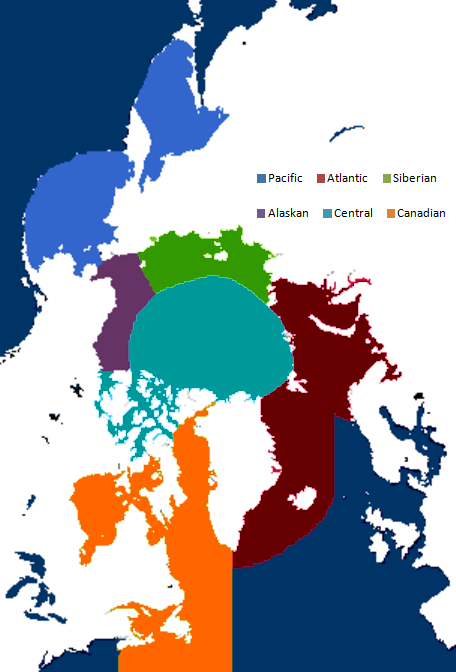 I've tried to match the above colours to the colours in the graphic below for ease of viewing, it's almost right but not quite. 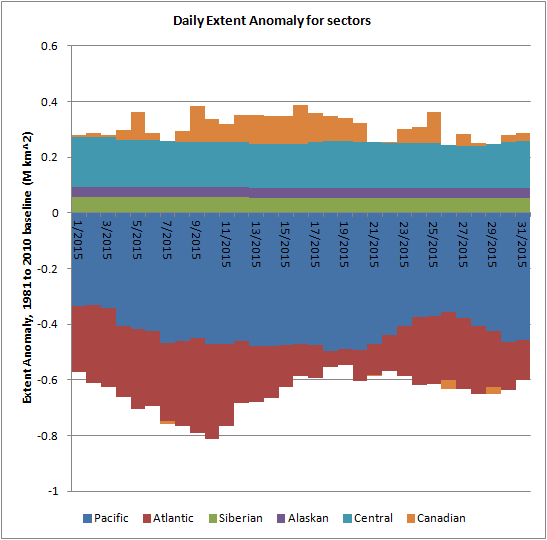 From the above it can be seen that the Atlantic and Pacific sectors account for all of the deviation below the long term average. Siberian, Alaskan and Central are 'topped out' and have slightly more sea ice extent than average. The Canadian sector has generally more ice than average, both Baffin Bay and Hudson Bay have above average extents for January, the Gulf of St Lawrence is marginally below average. 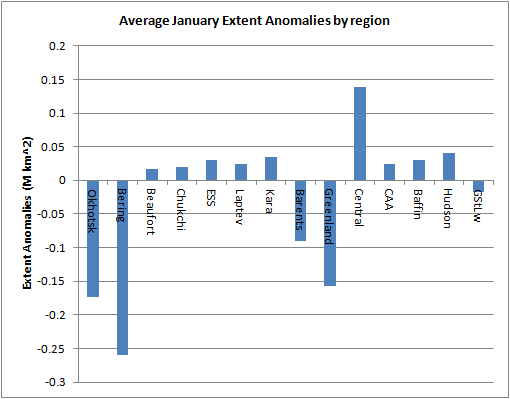 As I am working in anomalies that are the same as the NCEP/NCAR anomaly period, using plots of anomalies of various indices of weather should allow the causal factors to fall into place in an obvious manner.

The anomaly of surface temperature does indeed show warmer temperatures in the north Pacific and around Svalbard and eastern Greenland. Referring to the above plot of average January anomalies shows that the Barents and Greenland Seas have low extents. However Laptev has a high extent and from the plot below it can be seen that Laptev is mainly cooler than average.

However caution in interpretation is needed here: absence of sea ice will reveal ocean that is warmer than the surface would be were it ice covered. So the temperatures may simply reflect the lack of ice. To try to disentangle this complication I've moved upward to the 500mb pressure level, about 5km above the surface.

At this height over the Pacific a strong warming is seen, which suggests a greater depth to the warming there than I would expect due to the effect of lack of ice. Over the Atlantic sector the situation is different, here there is a cooling aloft, so lack of ice may be causing the warming in this region.

Sea Level Pressure (SLP) below helps to explain some of what is going on, in the Pacific sector a weak dipole formed by a high over the Bering Sea and a low over Okhostk may be drawing warmer air northwards. In fact the vector winds shown below suggest this is rather weak, with a lack of strong coherent flow over the region from the south. The northernmost Atlantic has a dominant low pressure tendency, this is drawing in air from Scandinavia, which had a warmer than average surface temperature through January.

Note that the warm patch around Svalbard and the north of Greenland is co-located with the dipole bwteeen high pressure over the Laptev Sea and low pressure over Iceland, this might suggest a role for either compaction of ice due to winds blowing onto the ice from the Atlantic, or air and ocean heat being transported to the ice edge from the south. In reality I suspect both are acting.

The surface vector wind anomaly shows the strength of winds in the Atlantic sector, with winds north from Svalbard. In the Pacific sector there is less of a clear pattern, however the low tendency in the north Pacific seems to be entraining southerly air and drawing it into the vicinity of the Bering Sea.

January has been rather uneventful, the lack of ice noted in early January has ended up with Bering Sea January average extent being the lowest since 1979. This is indicative of low ice extent in the Pacific sector which seems to be due to anomalous warmth. The cause of the low extents in the Atlantic sector is less clear but seems to be a result of low pressure in the region, which may imply wind driven compaction, wind driven influx of warmth from the north Atlantic (relatively speaking; it's still damned cold up there), wave action impeding ice formation, and possibly increased downwelling infra-red radiation from clouds.
Posted by Chris Reynolds at 12:27