PIOMAS August data is now out, this is the last monthly status post for 2014. More analysis of this highly unusual year will follow, and occasional commentary on the coming freeze season will follow. But now that the melt season is essentially over there are other sea ice related matter I want to get onto.

2014 had an anomalous spring melt, however it was muted and once it ended losses were substantially below the 1980 to 1999 average losses resulting in a climb in anomalies, as a result by 31 August 2014 PIOMAS volume is at 1990s levels. 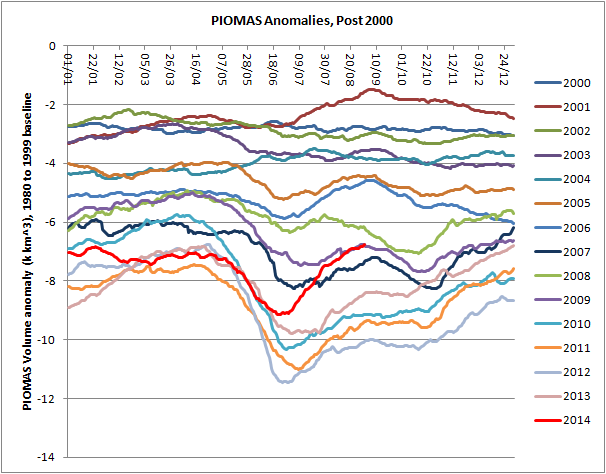 The following PIOMAS gridded thickness graphic shows the thicker ice in August 2014 which can be compared with the August 2012 thickness. 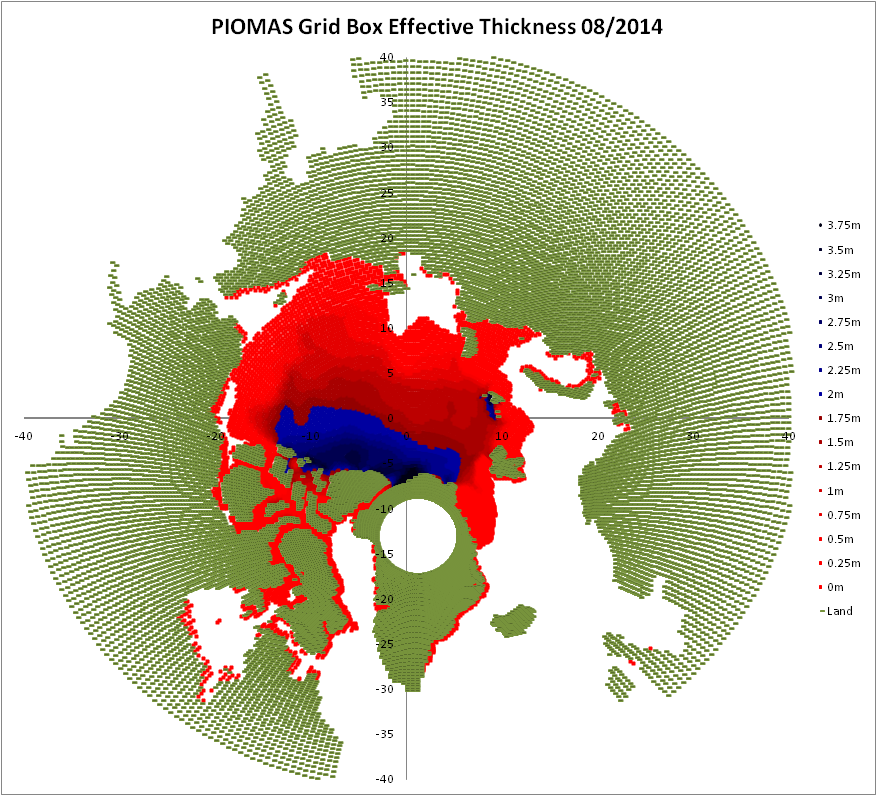 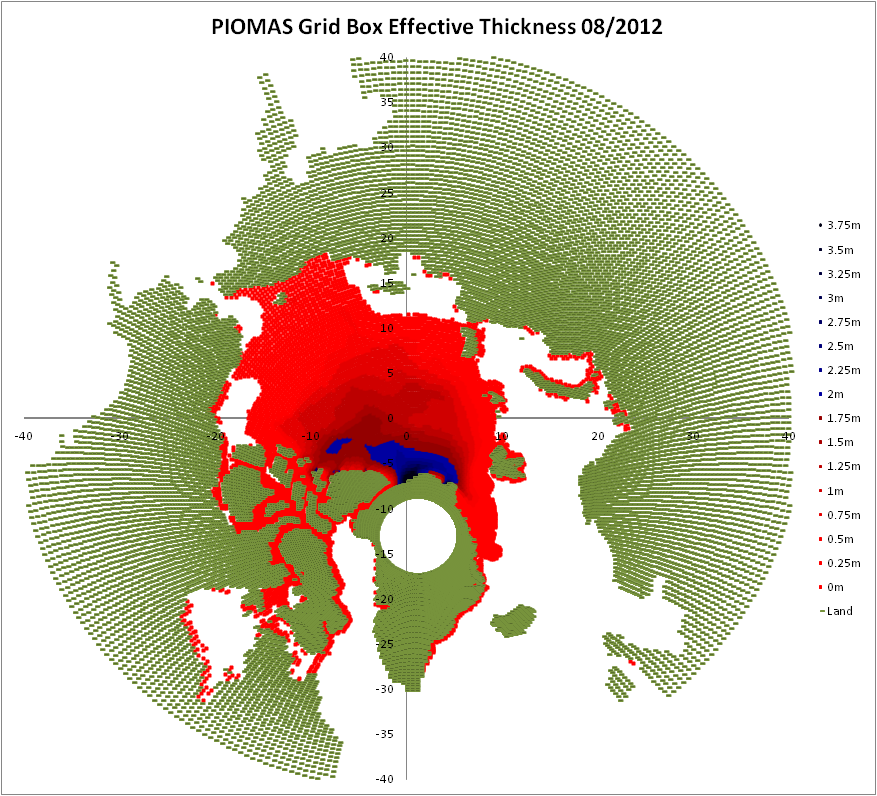 However as the above two plots show, the increase in volume in August is almost totally due to the Central Arctic, something has retarded ice loss in this region in 2014. 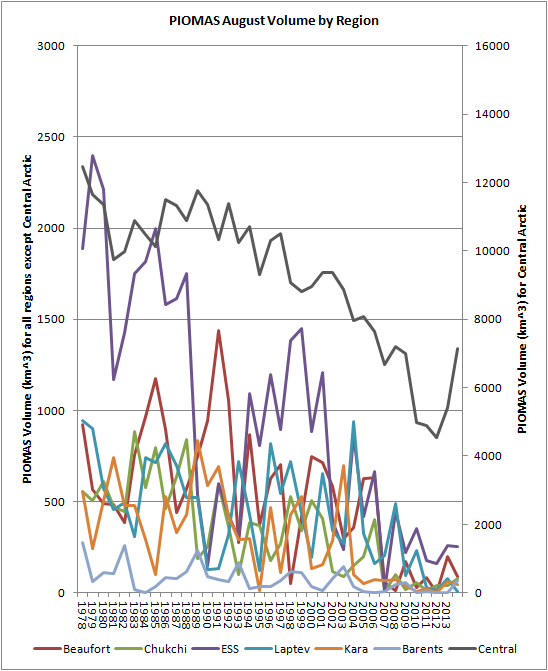 Turning to the regions of the Arctic Ocean, as usual I'll start with Beaufort.

Beaufort volume remains low, in terms of volume it is clearly not showing an increase on recent years. 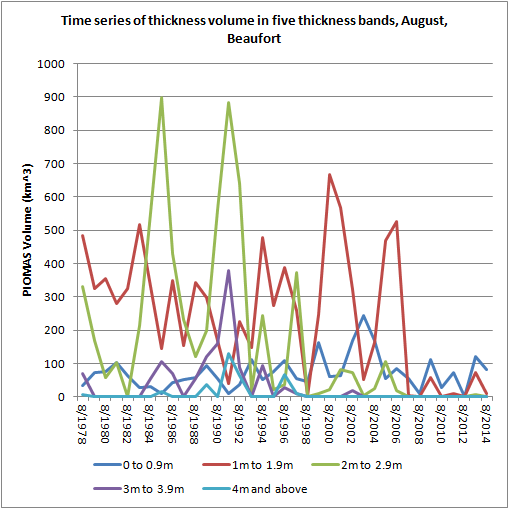 The thickness distributions for post 2010 years shows that Beaufort is more like 2011 than 2013, 2012 is visible as a flat line at zero (apart from some very thin scattered ice). 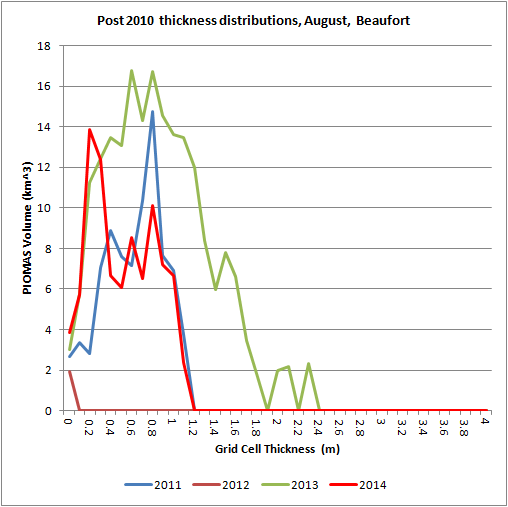 Looking at the progression of thinning through 2014 in Beaufort and a normal progression is seen, the initial mono-modal spikes around 2m thick being first year ice, which thins through to June, after which the spikes spread and crash in peak volume in July and August. 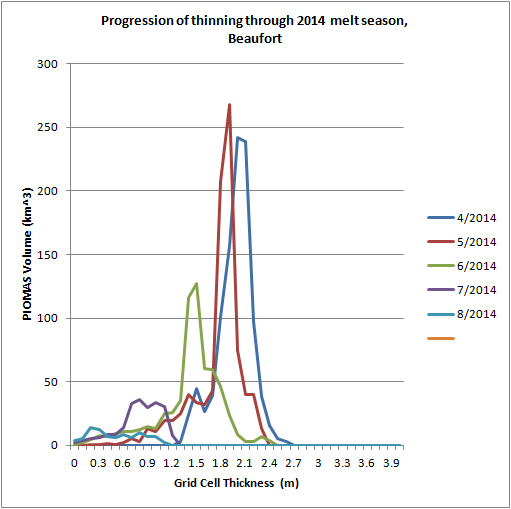 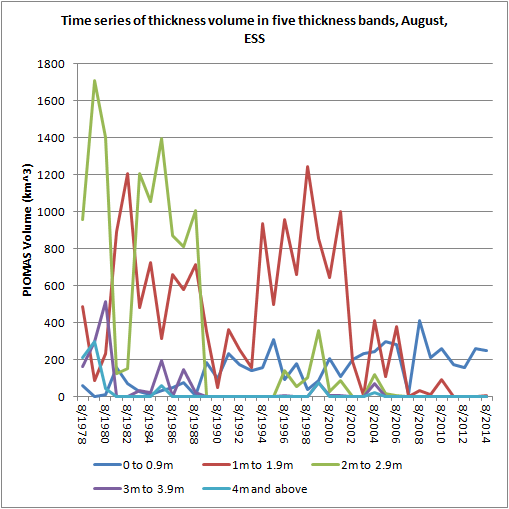 And again the thickness distribution is similar to the other post 2010 years, although it is on the thicker side, which is probably due to the persistent extent in the ESS. Note that the ESS does not show the export of thicker ice that is shown in HYCOM, however PIOMAS does not explicitly model a multi-year ice category. 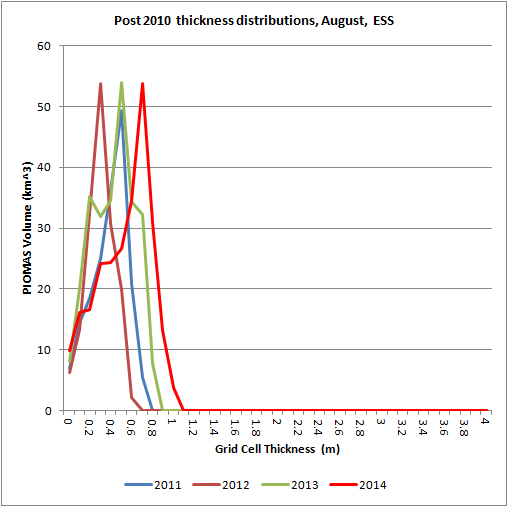 And the progression of melt is normal. 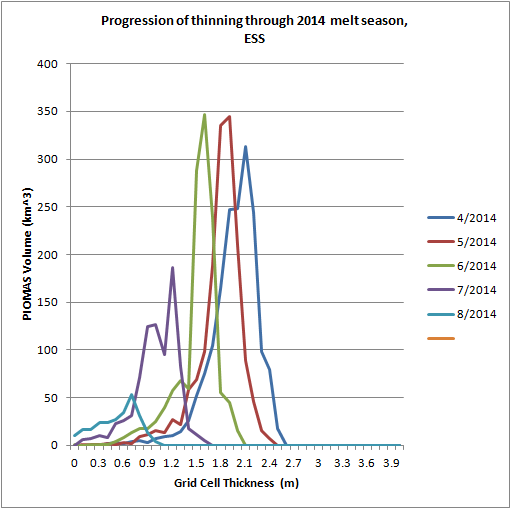 Before going on to the Central region, it is worth looking at Laptev. The Laptev Sea has had record low levels of ice for some 90% of the time for summer 2014 (June, July, August). The implication of this in terms of long term volume/thickness distributions is quite apparent in the following graphic. 2014 compares well with 2012 in Laptev. 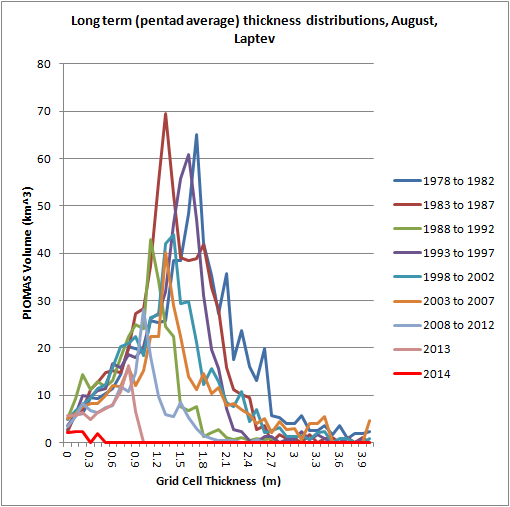 Now turning to the Central Arctic region we see where all that volume has come from. In my July PIOMAS blog post I showed how 70% of the July volume increase with respect to 2012 was due to ice between 3.0 and 3.9m thick in the Central Arctic. This has now spread in terms of grid box thickness with further thinning in August. 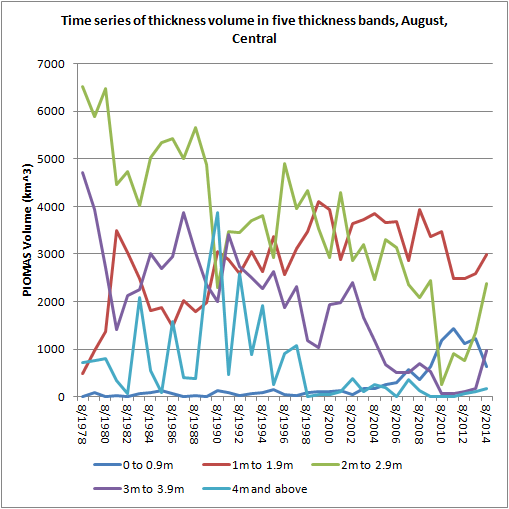 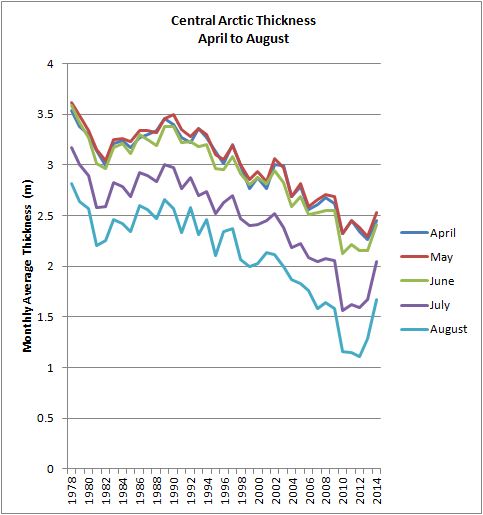 The post 2010 grid box effective thickness distribution underlines the position, with a massive increase in volume due to grid boxes over 2.6m thick. 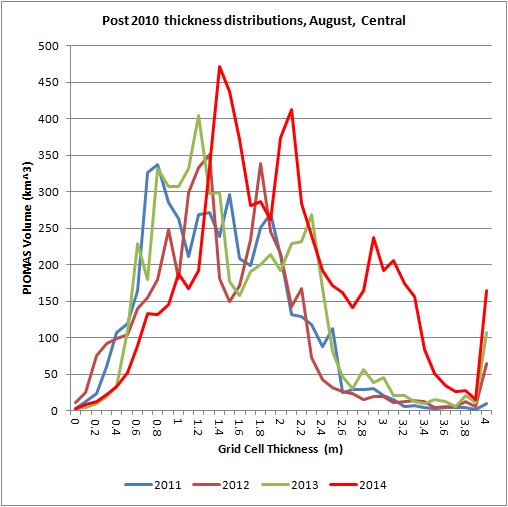 Looking at the progression of change in the grid box effective thickness distribution it is apparent that August holds a wide spread of high relatively volumes, here the melt has not been normal. The Central Arctic doesn't normally see the crashes seen in August for Beaufort and the ESS, however even so this year has seen a muted downward shift in thickness in this region. 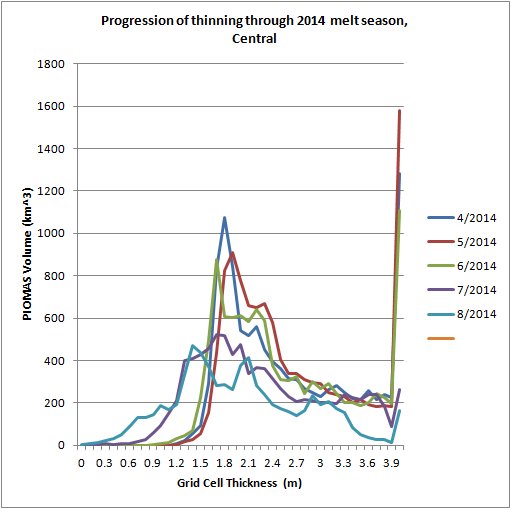 One reason why there has been a muted melt in 2014 is shown in temperatures. However temperatures can be raised by more open water, as the ocean warms, despite this complication I do not think this is merely an expression of less open water, the cooling is also visible at 850mb, although it is less marked than at the surface. 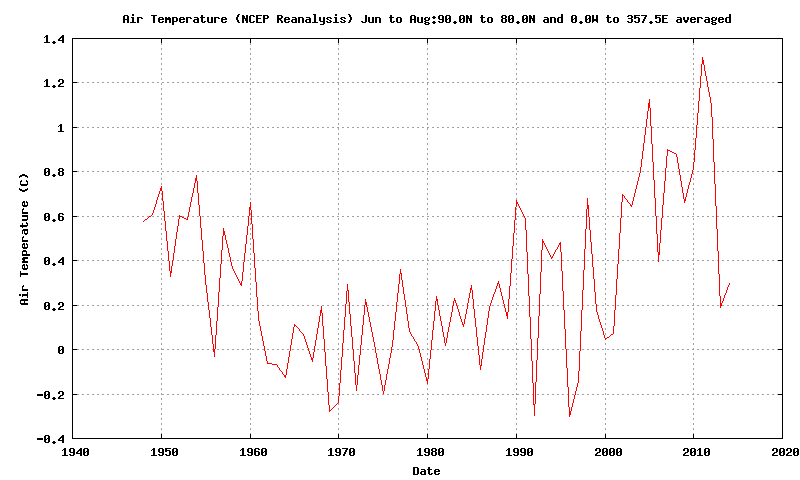 However in 2014 the North Atlantic has also been dominated by high pressure, suggesting a reduced pressure gradient across the Fram Strait, and implying less export. 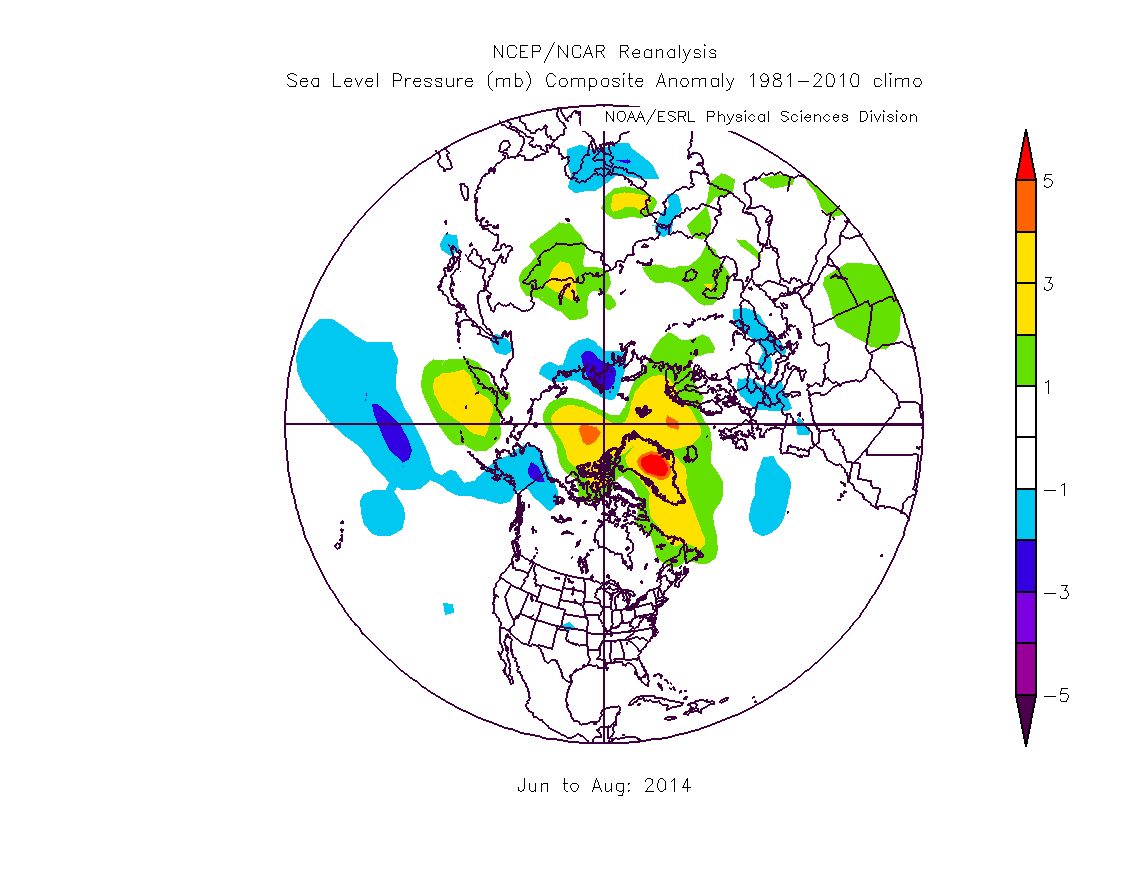 Vector sea ice motion from PIOMAS won't be updated until next year, but Wipneus has calculated Fram Export for PIOMAS, monthly figures are plotted here. Central Arctic Volume in April 2012 was 10.4k km^3, in 2013 it was 10.0k km^3, and in April 2014 is was 10.9k km^3, only a difference of several percent between them. For context, August 2012 was just 64% of the volume in August 2014. So it does not seem we need to concentrate on winter export.

The melt season of 2014 has been another muted melt season, however the resultant volume increase is primarily due to the Central Arctic, and the synoptic scale atmospheric situation has been very different. It is notable that 2014 has the second smallest 1 June to 31 August volume loss since 1979. Summer Fram export is typically low and does not explain the overall gain in volume over the previous year. The question remains what has caused 2014 to be such a poor melt year? I've been looking at that, simply blaming temperature is not the ultimate answer, but so far I haven't come up with a strong reason for the cold temperatures, just a lot of contradictory indications. I will post again about this year's melt season.

2014 will feed a large mass of ice into the coming winter, how this will affect next year and subsequent years remains to be seen. However in my opinion, at face value it seems to indicate record losses should not be expected for the next two years at least.
Posted by Chris Reynolds at 02:47