Extent has been definitely falling, this is accompanied by rather intersting conditions in the Atlantic sector of the pack. What is going on there? I hazard a guess concerning the very low extent in Barents.


The Atlantic sector is the Kara, Barents, and Greenland Seas, and is shown in dull red in the graphic below, other regions are defined in this post. 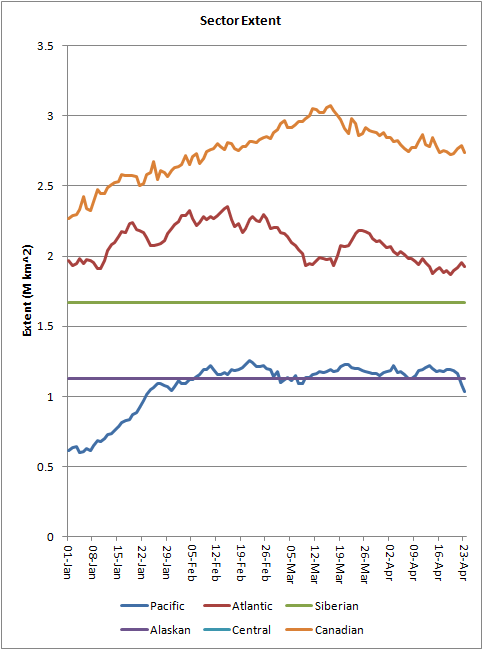 Pacific has been level for some time and has been below normal levels throughout the winter. The Canadian sector's extent has been falling, Hudson remains topped out and probably won't reduce for some time, Baffin has had above average extent through March and April, it is the Gulf of St Lawrence that is reducing extent in the Canadian sector. What has drawn my attention is the decline in the Atlantic sector since about 26 March, this is rather unusual.

The Kara Sea remains topped out, so what is going on lies in Barents and Greenland. I have plotted extent anomalies from the 1981 to 2010 baseline period for those two regions below. 1981 to 2010 is the same baseline as NCEP/NCAR use for their anomalies, so using anomalies in that weather data might be revealing as to the cause.

From the above plot it is clear that all of the action is in the Barents sea, and the drop in anomalies since 26 March 2015 is quite precipitous. Indeed, Barents is now at record low levels. Taking average extent for the most recent 7 days of data, and calculating the same average for past years, it is clear that Barents is substantially below normal extent for this time of year. Indeed, the anomalies above have dropped to almost -0.5M km^2, while actual 7 day average extent is just 0.36M km^2. 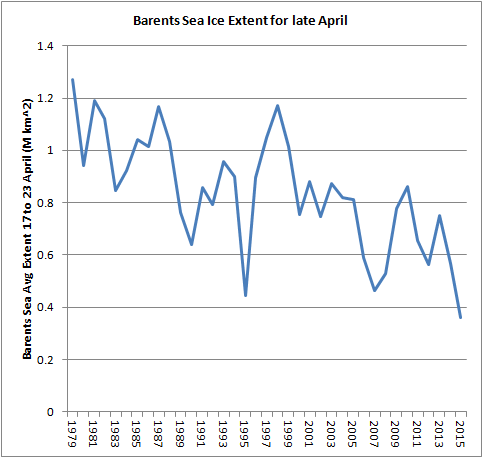 Looking at temperatures is tricky, reduced ice will present a warmer surface than the ice it replaced, so may draw one to an incorrect conclusion that warmth is driving current conditions. However the general trend of decline seen above is likely to be due to warmer Atlantic Waters (e.g. Carmac et al, 2015, Towards Quantifying the increasing role of oceanic heat in sea ice loss in the new Arctic, Open Access), I will have more to say about that paper in due course.

So let's look at heat transport from the north Atlantic over the period 26 March to 22 April 2015.

There is seen to be a tongue of warm waters off Scandinavia, however looking at the climatology for the skin temperature reveals that this is a normal feature.

Anomalies of skin temperature show warming in Barents, but this may be due to the deficit in ice, not necessarily because of warm waters from the Atlantic. None of this rules out deeper transport of warm waters, but with the data to hand I cannot pin the unusual conditions this year on unusually warm waters this year, despite the likely overall role for warming waters in the long term decline in Barents.

So turning to the atmosphere, I'll look at the overall synoptic situation over the period in question.

From 26 March to 22 April the Atlantic has been dominated by a blocking high over western Europe, giving us some very warm weather in the UK (for April). Northwards there has been a low, with attendant high index Arctic Oscillation. Within the Arctic Ocean flow has been dominated by a dipole, high over Siberia, ad the low over the eastern Arctic. The impact on winds is shown in the following plot of vector anomaly of flow for the region of the Barents Sea.

From this a plausible cause is clear, strong winds following the isobars of the low pressure anomaly blowing in from the North Atlantic and driving ice in Barents away from Scandinavia and towards the pole. However compaction by winds doesn't look like the driving force here.

If winds were compressing ice they should increase compactness, and over the period in question this does not seem to be happening in the Barents Sea. 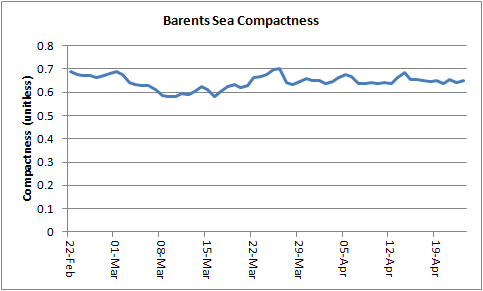 So I am left with no clear reason for the record low in Barents Sea late April extent, or the recent decline. However assuming that the two most likely factors seem to be wind driven influx of warmer ocean water or atmosphere, and wind driven compaction of ice, it seems to me that the lack of increase in compactness suggests that the latter is not at play. This leaves melt from warmer ocean or atmosphere, but which of those might I suspect?

I have taken a detail from the University of Bremen's AMSR-2 plots, link.

Using such a graphic it is not possible to discern the difference from a typical melt, as with overall anomalies of extent. However the island of Novaya Zemlya is interesting, that's the long thin island right of centre above the date.

There is some opening of a coastal flaw lead, referring to the vector wind plot posted above suggests this might be due to flow along the coast, but aside from that, what strikes me is that Novaya Zemlya seems to act as a barrier to whatever is driving the ice back. So considering the lack of evidence for compaction my guess is that a wind driven influx of warmer Atlantic waters has been driven under the pack and has caused the ice edge to retreat. But a guess is all it is.
Chris Reynolds at 13:17
Share