Ten months ago I posted about my change of mind, from thinking that a fast crash was a very real possibility to expecting a slow transition of the Arctic sea ice to a seasonally ice free state. I have now finished the series of posts detailing my argument. I should start by clarifying; by a slow transition I do not expect the summer sea ice to last into the 2050s, I suspect that around 2030 we will see the first summer with an extent of less than 1 million km^2.


Although I have backed this argument up with my own reasoning based on PIOMAS data, it is not a unique argument, nor is it the first time the factor on which I have concentrated has been noticed. The most beautiful and succinct summary of the process that I have read is made in the paper Armour et al 2010, "Controls on Arctic Sea Ice from First-Year and Multiyear Ice Survivability", PDF.


Given the strong thickness–growth feedback of sea ice (Bitz and Roe 2004), where in a warming climate we can expect the thicker MY ice to thin at a greater rate than the thinner FY ice, and the fact that the ratio of MY to FY ice entering into the MY ice category each year is decreasing, it is likely that the difference between FY and MY ice survival ratios will decrease in a warming climate. If this occurs, the Arctic sea ice system would move toward a regime of decreased memory and decreased sensitivity to climate forcing...

This is seen in the PIOMAS Gice sub grid thickness distribution. The volume decline has come from the thickest ice, with thinner ice remaining fairly level, actually on a slight upwards trend. 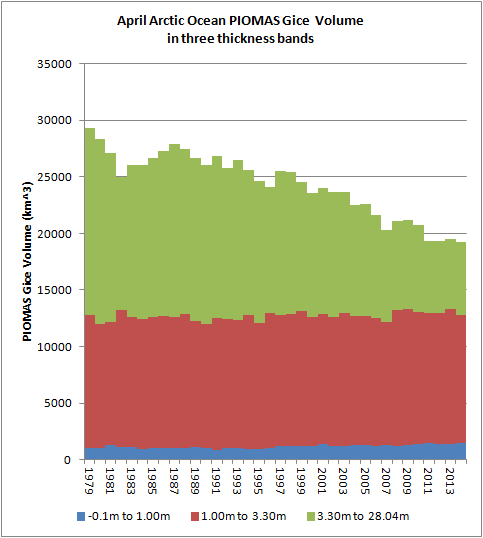 The volume under 3.3m contains the first year ice and is subject to ice growth by heat flux through it, the volume over 3.3m grows predominantly by slower mechanical processes such as ridging as the ice is crushed by movement of the pack. First year ice can regrow quickly in response to losses, the thicker multi year ice recovers more slowly from losses.

In my original post entitled The Slow Transition, I sketched the outline of an argument that the Arctic Ocean was undergoing an inflection to the long term trend of volume loss. I calculated a back-of-envelope figure for the volume one might expect for an Arctic Ocean thickness of about 2m.


Since 2000 April average area for the Arctic ocean has been around 9.65M km^2 - i.e. this is the nominal area of ice covered ocean at the volume peak. Assume a nominal 2m equilibrium thickness for the FYI, also assume that thinner ice at the Atlantic edge is to some degree offset by the thicker ice in the Central Arctic. 2m * 9.65M km^2 => 0.002km * 9650km^2 = 19.3k km^3. So an April peak volume of around 19.3k km^3 is the nominal volume associated with an Arctic Sea ice nominal thickness of around 2m.

I then showed that since 2010 April PIOMAS volume for the Arctic Ocean had levelled at around 19.3k km^3.2011, 2013, and 2014 were within 1% of 19.3k km^3, while 2012 was 2% above that volume. It was pointed out by some that this meant nothing because there have been other localised levellings. However this levelling just happened to occur at around 2m thickness, which is the approximate thickness one would expect for first year ice in April growing from open water in September. Obviously that could just be a coincidence, so I needed to make a stronger argument, and have done so in a series of posts over the last ten months.

In the post entitled Trendsetters, I looked at the dangers of relying on statistical extrapolation of sea ice volume, showing how even with an excellent fit, extrapolation can give the wrong answer.

I then looked at Arctic Ocean Energy Gain, an objection to my original idea had been that the volume loss represented an increase in energy in the Arctic Ocean, and that it seemed impossible that this be slowed down given the background global warming. The answer comes from Armour et al, where they state that "the Arctic sea ice system would move toward a regime of decreased memory and decreased sensitivity to climate forcing". In other words, the increase in autumn/winter volume growth in response to lower volume (or extent) at the September minimum acts against the volume loss, so the apparent energy gain is slowed, with increasing energy being vented to the atmosphere from more open water and thinner ice in the autumn and winter.

This took me on to look at the thickness growth feedback. I showed a simple model of sea ice growth over autumn and winter, then I expressed the model in terms of that feedback. Using that model I was able to explain the autumn winter growth in PIOMAS in the Arctic Ocean, to account for the Central Arctic volume gain, and show that the thickness growth feedback is a powerful negative feedback, that has been active in the past, and has the potential to become even stronger in the years to come.

Looking at the region of Beaufort, Chukchi and the East Siberian Sea, and the Central Arctic I showed how a wall has developed, below which the ice is not thinning as fast as the thicker ice is declining. This is also seen in the wider Arctic Ocean Data, where the Arctic Ocean is Beaufort Sea round to the Greenland Sea, Central Arctic and the Canadian Arctic Archipelago. 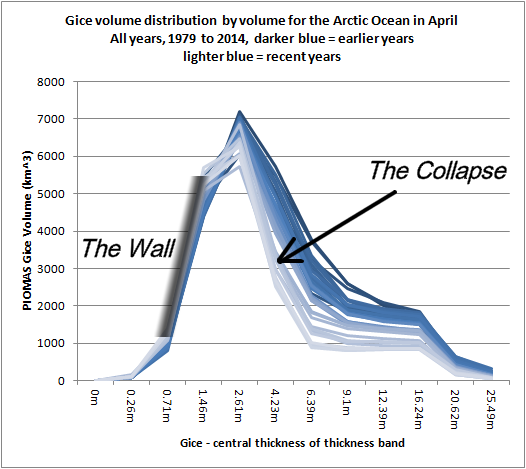 The collapse of thicker ice is greater than the collapse of thinner ice, resulting in a wall. The wall is drawn as a fuzzy line because it is due to the thickness growth feedback and thickness over the winter is determined by the cold over winter. However, despite warming over winter in recent decades, ice growth over autumn and winter has increased, so far there is no indication that winter warming is likely to severely limit winter ice growth in the short term. The wall implies that future volume loss rates for peak volume will reduce below the rate seen for the past volume loss, which has come from thick ice.

Whilst writing these posts there has also been a recent important paper in the scientific literature, from Wagner and Eisenman, discussed here. It seems that the simple models that show that show rapid crashes are doing so because of lack of seasonality and latitude in the seasonal cycle, and lack of heat transport response to warming. The more complex GCMs are likely correct in not showing such a behaviour. The heat transport response to warming is a negative feedback not covered in this series of posts, I lack the data to examine it. But in a nutshell it is because heat transport reduces as the temperature gradient between mid latitudes and the Arctic reduces with warming of the Arctic. Wagner and Eisenman conclude that simple physical models "overestimate the likelihood of a sea ice “tipping point”"

During a 2014 Sea Ice Prediction Network seminar, Dr Ed Blanchard Wrigglesworth gave some interesting results from PIOMAS (hat tip to Crandles), around 55 minutes into a Youtube video. The following graphic is taken from the video, so the detail is poor. However the left column shows PIOMAS thickness for recent years as a control, while the right hand column gives the results of the experiment with PIOMAS. The months going down the rows are from June to September. 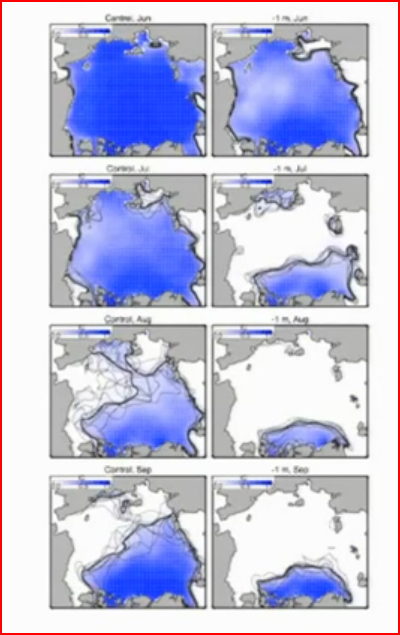 The experiment was to instantly reduce sea ice thickness by 1m over the entire PIOMAS domain at the start of June, I've started calling this the PIOMAS -1m experiment. What was found was that over much of the pack the ice cover collapsed, despite this a residual of sea ice survived for the whole of the summer off the CAA. That residual volume probably amounts to an extent of around 1 million km^2, which makes the state in August and September a virtually ice free state. But that was produced by dropping ice thickness at the start of June by 1m, for thermodynamically thickened ice of around 2m thick that is around a halving of thickness.

Taking into account impacts on winter warming and late season delay to re-freeze, both of which will lead to thinner winter sea ice, this experiment does suggest that whatever winter conditions are needed for a pack 1m thinner than in recent years, the result is a virtually ice free state. So somewhere between current conditions, with winter thermodynamic thickening of about 2m, and a future state of 1m, we will see a very new behaviour of the ice pack emerge. In the spring volume loss of some recent years we may be seeing the start of this process.

What the PIOMAS -1m experiment does suggest the critical importance of April volume for how fast sea ice can be lost in the Arctic Ocean. Note what happens between June and July; halve the thickness and there is enough energy to remove most of the pack, giving a July state worse than any recent September low extent year so far.

The message from this experiment is clear, to get severe summer loss of ice extent and to be left with less than 1 million km^2 by September we need to see a substantial thinning of April thickness. However as I have shown, April 2011 to 2014 shows a four year levelling of volume at around 19k km^3, and this volume is what one would expect for a pack dominated by first year ice with a typical thickness of just under 2m thick (the Central Arctic thickness lifts the average up to 2m). There is a 'wall' in the thickness distribution for April sea ice volume that is arresting the decline of thickness, at around 2m. So I argue that we are seeing an inflection of winter peak volume, the previous rate of decline will relax and April volume will stabilise into a slower rate of decline.

The 2015 volume increase is a problem for me, in that it means I have to wait until volume drops again to see if the following years reveal a new levelling of April volume at around 19k km^3, needless to say, that is what I expect to happen. 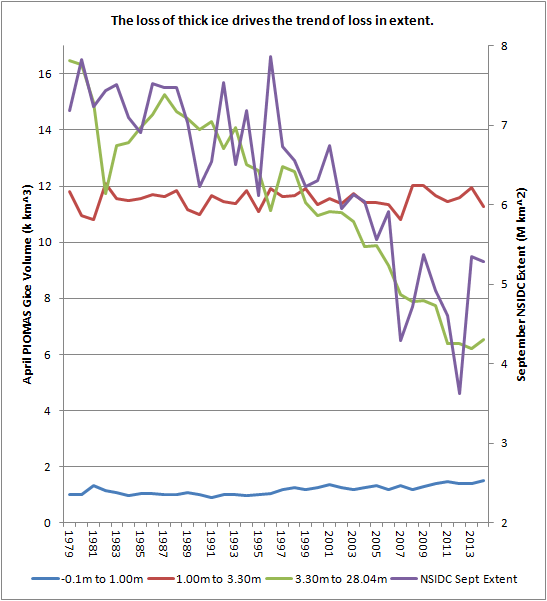 As long as there remains sea ice in September this thickest ice cannot drop to zero, this is partly due to transport of ice into the Central Arctic off the northern coast of the Canadian Arctic Archipelago, but even in regions of first year ice dominance, Gice shows a significant volume of ice in the 3.3m to 28.0m category as a result of winter ridging of ice. A scatter plot of this thickest April ice volume and the September extent has a linear trend (R2 = 0.72) that gives 2.65M km^2 extent when the thickest ice volume is zero. So even if the thickest ice declines further it does not imply a collapse in September extent. However as the pack has thinned from loss of thick ice so the amount of open water exposed by spring and summer melt has gone up, which is why September extent has dropped at a faster rate than March extent.

If I am correct that we are at an inflection point in volume loss and that winter peak volume will level at around 19k km^3, then the range of September extents seen since 2007 will become the new normal regime, with a slower rate of September extent and April volume loss as the Arctic winter warms up. It will take many years to see how this will pan out. So having made my case as well as I can, the only thing to do is to leave this subject and see what happens.
Chris Reynolds at 12:21
Share