It's all going a lot J G Ballard

This is the last post on this blog for a while, I don't know how long, I don't even know if I will resume. Given my nature it is likely that when I have more free time in a few years some other shiny puzzle will attract my attention. I will be putting comments on moderation in due course but will try to pop in to check them, but being very busy I might not make it as often as I'd like.

This decision is because of two factors: I have my savings outside of the UK now and need to keep my eye on business matters in order to actively manage my investments. I am now on the Financial Times website far more than any climate change or sea ice related site. Also the impacts of the disastrous Brexit vote are already starting to hit UK industry and I am finding my day job takes more of my time. Something has to give, it's not going to be walking, computer gaming, mixing music, watching films, radio tinkering, so it will have to be sea ice.

When the vote was made back in June I did a post entitled It's all going a bit J G Ballard. Now, nearly three months on, it is far worse. And, as I keep having to remind deluded Brexit voters, we haven't even left the EU yet!


Prior to the Brexit vote the $/£ exchange rate was fluctuating around $1.45, after the vote it assumed a new level of around $1.30, a drop of 10%. This was a reflection of market downgrading due to uncertainty, not a new assessment of the value of the UK outside the EU.

Whilst it has been obvious to many, including myself, that a 'hard Brexit' was the only end result of Brexit. For those traders outside of the EU and UK there has been understandable doubt as to whether the exit from the EU would be 'hard' or 'soft'.

Martin Wolf of the Financial Times provided the most effective summary (subscription) of why we face a hard Brexit In essence this comes down to the three principles upon which the campaign for Brexit was waged: Immigration, Money, Law. That is, the Brexit campaign wanted control over immigration from the EU, for the UK to pay no money to the EU, and for the UK to enact no EU legislation. All three of these are fundamental issues for the EU, particularly free movement of peoples within the EU's free market members, we cannot retain access to the free market without conceding on these three points, but due to the nature of the Brexit referendum we cannot concede.

The markets have obviously thought that the UK could not be stupid enough to follow through on a hard Brexit. On 3rd October at the ruling Conservative party conference the markets were disabused of this mistaken belief by the senior ranks of the Conservatives, especially the new Prime Minister Theresa May. A string of hardline speeches and the Prime Minister declaring that we would enact 'Article 50' in March next year

Finally the markets responded and the exchange rate started a decline that has not ended yet. Image from XE.com. 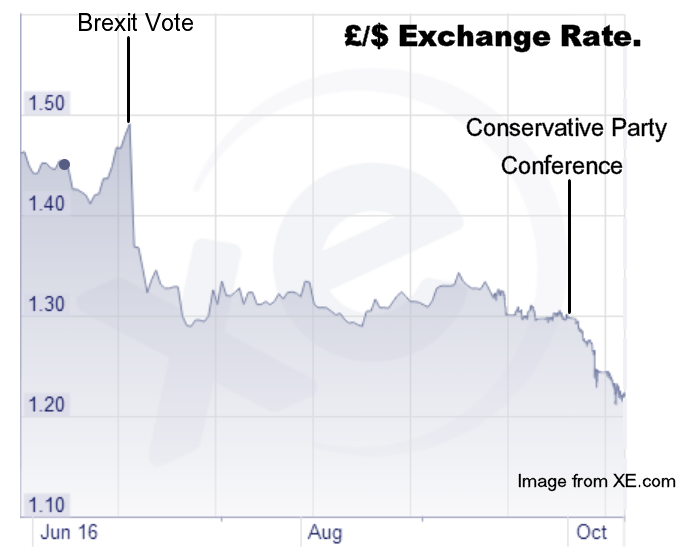 As I write the exchange rate stands at around $1.26, 13% below pre-referendum levels, 3% below the valuation that priced in uncertainty. The markets are in the process of finding an equilibrium that includes more depreciation with the expectation of a hard Brexit, this is not over yet, further declines are likely once the reality of the necessarily hard line EU negotiating position becomes clear next year. When the likelihood of us being outside of a tariff wall fencing us off from 44% of our export market becomes a reality what will the effects be? The prognosis is poor.


So in mothballing this blog, what of sea ice?

I have previously made the argument in detail that we are going through an inflection in the loss of sea ice due to the thickness growth feedback, a negative feedback. This argument was summarised here. I see nothing in the state of sea ice this summer that undermines that argument, especially as my prediction of May (which was based on April Arctic Ocean volume) was for a September minimum of 4.0 to 5.3 million kmsq, and the actual September extent was 4.72 million kmsq.

Furthermore, despite claims that the highly anomalous winter warmth could lead to a massive loss this year, that didn't happen. An index of importance here is the convergence of summer volume loss and April volume. By 'summer' I really mean the melt season, April to September, when losses over the summer equal the April volume there is no sea ice left in September. 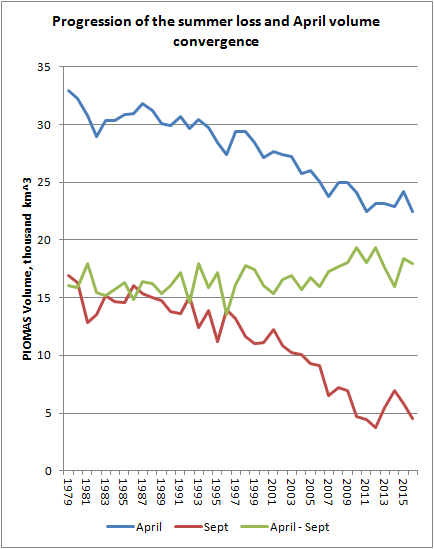 This does not suggest that the previous trend of closure is continuing. However that is not to say there was no sign of an impact from this winter's anomalous winter warmth. Compactness is the ratio of area/extent, and is an indicator of the dispersion of the pack, as it goes lower the ice floes are more dispersed. 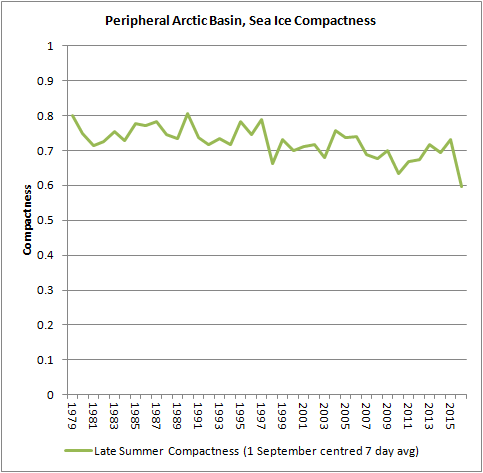 This year saw record low compactness for late summer, but it is such an outlier it is probably conservative to view it as the result of the unusual winter.

As for the longer term? The Arctic Ocean sea ice is in terminal decline, Tamino recently shoots two fat fish in a barrel that are trying to claim that the sea ice is recovering. And the answer to his question is: Yes, anyone making the case that Arctic sea ice will recover is trying to make themselves look like an idiot.

I have agreed with Torstein to keep on doing some of the PIOMAS data. I will however only be updating the monthly regional PIOMAS volume and thickness tables. Previous work on PIOMAS Gice with monthly summaries will not continue and that data is rather too complex and bulky to provide numeric breakdowns on a regional basis. The data is available here.

In closing, a message to all the scientists who have provided the papers and data that have informed me for the past seven years, and to the fellow amateurs who have challenged me to argue better and have often informed me:


So long and thanks for all the fish.
Posted by Unknown at 11:50

Sorry you are going but best wishes.

Comments on moderation from now.